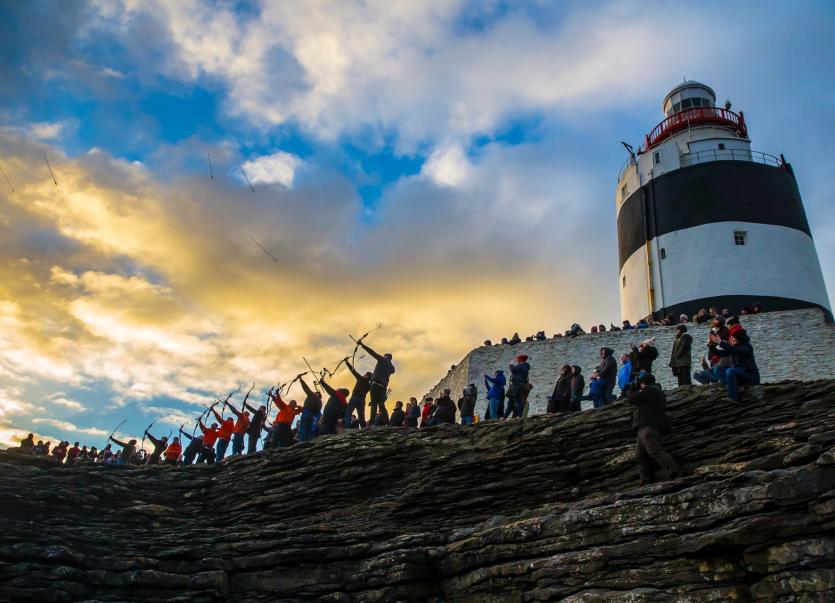 A centuries-old tradition takes place on New Year’s Day at the 800-year-old Hook Lighthouse - a traditional “arrow ceremony,” an ancient tradition which dates back to 1687

Hook Lighthouse is set to host a variety of traditional events this festive season with a fun-filled St. Stephen's Day planned to feature a traditional Daisy Day Hunt, which dates from the 1940s, and on New Year’s Day an ‘Arrow Ceremony’ ceremony dating back to the 1600s will be reenacted, with both events free to the public.

On St. Stephen's Day at Hook Lighthouse ‘Daisy Day’ will be hosted. This is an age-old tradition, as Hook Lighthouse records show the old custom in the form of 'Penny for a Daisy' was carried out by  large numbers of children who collected the first flowers in 1943 and received pennies for them.

According to Hook Lighthouse, “The child who found the first daisy would win the hunt but lots of children would receive pennies from the families in the area.”

This St. Stephen’s day will see the hunt take place again and children receiving edible money for their efforts. Free afternoon entertainment will also be on offer and a treasure hunt will take place from 2pm to 4pm as Eco Sheriff and resident pirate Pirate Pat challenge each other to who’s better at treasure hunting, plus there will be art workshops with resident artist Rose.

An age-old tradition also takes place on New Year’s Day at the 800-year-old Hook Lighthouse in County Wexford as the archers, both expert and amateur, take part in a traditional “arrow ceremony”.

At 1pm, the Dunbrody Archers will join Cllr John Fleming, An Cathaoirleach, to participate in the ceremony. The ancient tradition dates back to 1687 when the Mayor and the corporation of New Ross claimed their authority over the Tower and waters by travelling to the point of the Hook and shooting an arrow into the sea from Hook Head Lighthouse.

On New Year’s Day 2020 the Mayor will cast an arrow into the sea symbolising the Port's authority over the estuary. Members of the public are invited to watch the free, historical event at 1pm on New Year’s Day.

Commenting on the upcoming event, Lorraine Waters at Hook Lighthouse said, “This is always an incredible occasion to witness and we are delighted to continue the ancient tradition, right here on the cornerstone of Ireland’s Ancient East.”

Hook is renowned as the oldest intact working lighthouse in the world, from the 5th-century monks lit fires to keep the ships at sea safe. The Hook Lighthouse tour incorporates 115 steps to the top of the lighthouse tower featuring holograms illustrating the ancient history of the tower and the Hook area and spectacular views of the southern coast.

Hook Lighthouse Visitor Centre and Café closes on at 5 pm December 22nd and re-opens on St Stephen’s Day at 11 am and will remain open throughout the holiday season. For further details see www.hookheritage.ie