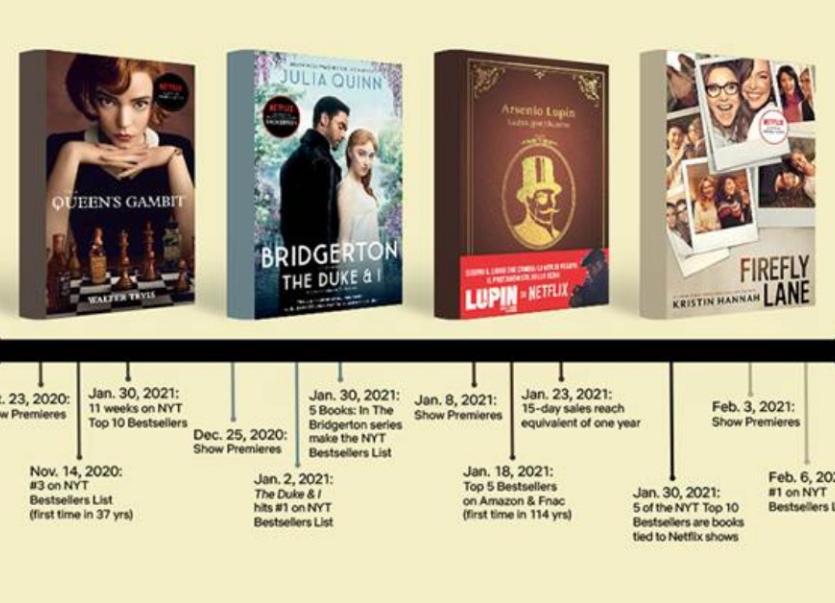 It's World Book Day today, a day to celebrate books and shared reading, whatever the circumstances.

Over the past year, many of us first fell in love with stories like hit TV series The Queen’s Gambit, Bridgerton, Lupin and Firefly Lane through the books that these popular series are based on.

In fact, led by Bridgerton, half of the Top 10 titles on The New York Times Best Sellers list in February were books tied to Netflix series, and they’re not alone in having a literary revival.

As it became the streaming giant's biggest series, the popularity of Julia Quinn’s Bridgerton novels ballooned - at one point five books from the series were on the New York Times Best Sellers list, with The Duke and I holding steady at #1 for four weeks.

Kristin Hannah’s Firefly Lane first appeared on the Top 10 list a month ahead of the show’s release as interest in the series grew. The book hit #1 just three days after its premiere, and 13 years after its first publication.

Three weeks after the limited series premiered, Walter Tevis’ The Queen’s Gambit appeared on the list for the first time since it was published 37 years ago; and went on to stay in the Top 10 for 11 weeks.

After Lupin premiered, Maurice Leblanc’s original book (written in 1907) began trending in several countries such as Italy, Spain, the US, the UK and Korea, with sales reaching the equivalent of one year’s worth in just 15 days. Ten days post-premiere, the book ranked in the Top 5 bestsellers on Amazon and Fnac.

So, what other books could be back as a bestseller?

Here are some of the noteworthy adaptations coming to the Netflix catalogue: