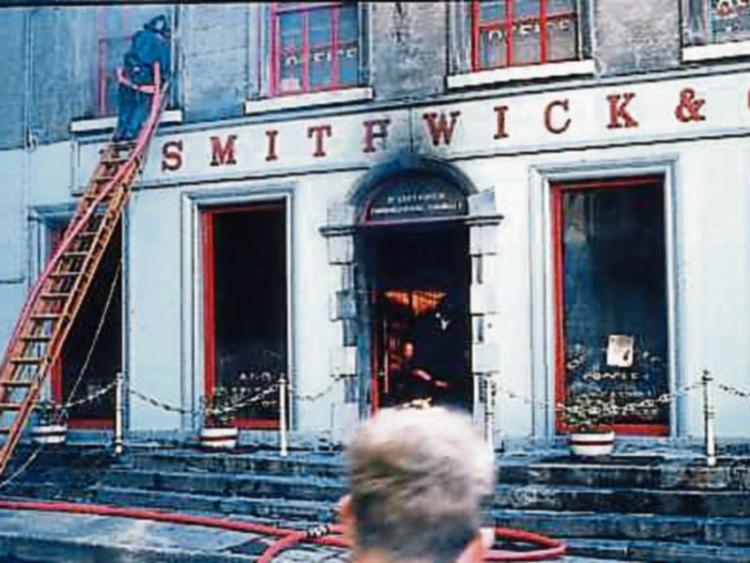 If there is one family name even more closely linked with Kilkenny right now than Liam MacCarthy, it surely must be Smithwicks. John Smithwick in 1709 begun what was to be a 300 year association (to date) with the city.

The site around St. Francis Abbey has been associated with the brewing of beer ever since the 13th century when the records speak of the ‘fulsome brew’ made there by the monks. Using quality water, taken from the Friar’s own wells, mixed with natural ingredients from the lands around the abbey, monks began brew­ing on the site almost as soon as the abbey itself was established. The Abbey grew in size, reach and importance for more than 300 uninterrupted years. The tragic mid 14th century Black Death which devastated the population of Kilkenny was recorded in stark terms by one of their members, Friar John Clynn. His is perhaps the only contemporary record to survive of this devastating plague in Europe. It took Henry VIII’s dissolution of all monasteries in 1537 to force the Abbey to ultimately close its doors and cut for ever the close religious link with the area.

John Smithwick moved to Kilkenny in the early 1700s to forge a life for himself.

He went into the brewing business with Richard Cole on a piece of land that Cole had leased from the Duke of Ormond in 1705. Smithwick worked hard and successfully, quickly becoming the sole owner. In time his business interests expanded. He was one of the few merchants who created a brisk trade selling tea. He worked with skill and diligence to build a fortune amassing wealth in both land and commercial property. John’s sons didn’t follow him into the brewing trade and the brewing and other business that had started the family’s fortune passed from their hands but fortunately, not for long. Edmond Smithwick, son of John Smithwick II, bought the brew­ery back freehold and the Smithwick family name once again hung proudly above the door. He proved himself a natural busi­nessman

Edmond was four times Mayor of Kilkenny. He gave generously to the city. When famine hit in 1847, with others he set up a soup kitchen to feed the poor and needy. He also made substantial contributions to the high costs of construction of St. Mary’s Cathedral and became a great supporter of Catholic Eman­cipation. This interest cemented his friendship with the champion of that cause, the Irish Liberator, Daniel O Connell who was later to become godfather to one of his sons, Daniel O’Connell Smithwick. They still talk of O’Connell’s visit to the Brewery and his electrifying address on that memorable occasion.

Edmond Smithwick is credited with devising and introducing the business strategy of em­ploying the most knowledgeable, the most progressive and the most skilled brewers and work force. He reasoned, correctly they could be relied upon to bring scientific and technical innovation to their task. The results gave Smithwicks beers a quality second to none. He even hired consultant chemists to vet and check the raw ingredients and oversee the final brew. The once, small almost obscure city brewery he had acquired was now a business to be reckoned with.

In the late 1800’s export sales to England and Scotland were very difficult. Individual public houses in those countries were “tied” to specific English based brewer­ies who sought to reduce competition and create for themselves captive markets by this practice. But Smithwicks found a way to survive and the company began selling mineral water and even de­livered butter with their ale from the back of their drays. The busi­ness not alone survived but by 1892 Smithwick’s won 1st prize in Ireland in the Dublin Rotunda Exhibition of Brewers and Distillers.

When James Smithwick took over in 1900 the fortunes of the company were at an all time low. Smithwick’s still employed 200 people but out­put was down and auditors – never the most adventurous of advisers - recommended the brew­ery shut its doors. Instead the Smithwick family dug deep and keep the business going. The range of beers was reduced; new markets were sought; James won military contracts for the sale of beer to garrisoned troops. Output increased. By taking advantage of brewery closures in England he replaced and in the process upgraded his plant and machinery. Sullivan’s Kilkenny Breweries Ltd, his long-standing rival was bought which again provided vitally needed brewing ma­chinery right on his door step. The new municipal water supply introduced in Kilkenny around that time was extremely pure and low in salt and was perfect for brewing ales. It eliminated dependence on local, well-water sources

James’s son Walter Smithwick, already a successful solicitor, took control in the 1930’s. At that time beer heading west went by canal barge, other destination were served by train and even by horse & cart. Walter purchased petrol lorries to serve customers as he realised distribution was to be a major key to success. On top of their salaries he incentivising his sales men all over Ireland who could now earn a commission on every barrel sold, a new and radical concept in the Ireland of the 1930’s

Walter Smithwick was committed to advertising and marketing when that latter concept was hardly recognised as a separate factor in business. Large slogans referring to Smithwick’s No.1 began to appear on buses, trams and in newspapers throughout the land. In October 1937 Smithwick’s No.1 Ale won first prize at the London, Bottled Beer Competition. A national-wide, brand awareness was the company’s far more valuable prize and result.

When the war ended in 1945 business was looking good and by 1949 sales had reached a record 51,500 barrels per annum. The next decade was one of fierce competition with Bass, Double Diamond, Macardles, Perrys and Phoenix all competing for market share. Ultimately none would prove a match for Smithwick’s popular taste and sustained, high qual­ity. By 1959 Smithwick’s was as popular as ever.

Around this time Walter and his marketing director, the resourceful W. A. L. (Bill) Finnegan visited Munich and attended the long established and world famous Munich Beer Festival there. The verve, colour, music and excitement of it all captivated them both. That night a decision, which was to have a profound effect on the future progress of Kilkenny and the brewery was hatched. Kilkenny, they resolved, would have a Festival bringing all the trappings of a Bavarian Beer Festival to the banks of the Nore. The huge Beer Tent featuring a traditional Bavarian band and serving staff in suitable eye-catching uniforms is for many people one of the fondest memories of growing up in the Kilkenny during the ‘60. The festival proved an outstanding success for many years and can justly claim to be the first of Ireland’s marketing led festivals. With the strategic, guiding hand of Walter Smithwick, the drive and promotional expertise of Bill Finnegan and later the organisational skill of Mick McGuinness the festival broke new ground and put Kilkenny firmly on the tourist map, a premier position from where it never retreated but rather continued to grow and expand.

The world wide giant, Guinness & Co, one of Smithwick’s oldest malting customers bought a con­trolling share in the business in 1964. Walter retired from the board the following year after 35 years service and his eldest son, Peter took his place marking the ninth generation this remarkable family has been associated with brewing in Kilkenny.

Peter, also a solicitor, in latter years continued a successful career as a judge and was honoured as President of the Circuit Court and later appointed by the Government as chairman of The Smithwick Enquiry. Meanwhile his high profile brother, Paul Smithwick continues to work to advance the good fortune of Kilkenny from his base in Dublin where he too practiced law for some time.

Meanwhile other branches of the family added to the name, business prowess and range of activities. The large, four story premises of D. Smithwick and Son was an imposing and significant presence on High Street. A second cousin of Walter, Joe Smithwick built up a thriving business in the large premises acquired by his family in 1910 from its previous owners - a Bank, which tradition has it failed in that year. Under his guidance the business prospered and expanded, their famous tea and other groceries being just part of its many services to the public. On his death in 1958 the business passed to his young son Daniel with the faithful John Clifford continuing on as manager. In addition to the business on High Street, Dan converted part of their old Bottling Store on New Street to develop the concept of Cash And Carry Wholesaling to smaller shops in County Kilkenny and beyond.

This was to prove a fortuitous decision when on Sunday, a far from ‘glorious’ 12th of July” in 1970 the entire High Street edifices was engulfed by fire and left a smouldering ruin. To make matters worst the fire took place during the Bank strike of that year and much cash and many cheques, the takings amassed over previous weeks, which perforce could not be lodged, were in jeopardy. Thanks to the quick thinking and bravery of the fire service all was rescued from the blazing building.

To this day the family are proud of the quick reactions that enabled them with the ready help of their suppliers and the generosity of the owner of a nearby vacant shop to declare it was “business as usual” by the following Friday – a remarkable triumph over sudden adversity and achieved in just 4 working days. The tenacity, determination and business acumen of the Smithwick family was never more tested and never more apparent than during that disastrous week. Later the business was moved in total to New Street where it continued until Daniel’s Smithwick’s retirement recently.

It is worth recording the efforts made by the late Ron Girdham then Head Brewer in Saint Francis Abbey Brewery to re-establish the religious connection by having constructed within the walls of the old abbey a small oratory which he was pleased to title, perhaps somewhat grandly, as “An International Room for Prayer and Contemplation”. Rumour has it he was not much pleased when he overheard someone remark, tongue in cheek, “Seems the ideal place to say an ‘Ale-Mary’!

The Smithwick name is long associated with Kilkenny, with quality and reliability reflecting the ideal combination of modern technology coupled with tradition values. Their family story embodies the best aspects of courage and confi­dence, enterprise and business triumph over adversity. How their story will unfold in the future we must leave to the future but if the past is anything to go by then one thing is certain, Members of the Smithwick families with continue to make their mark in Ireland and especially in their beloved Kilkenny.