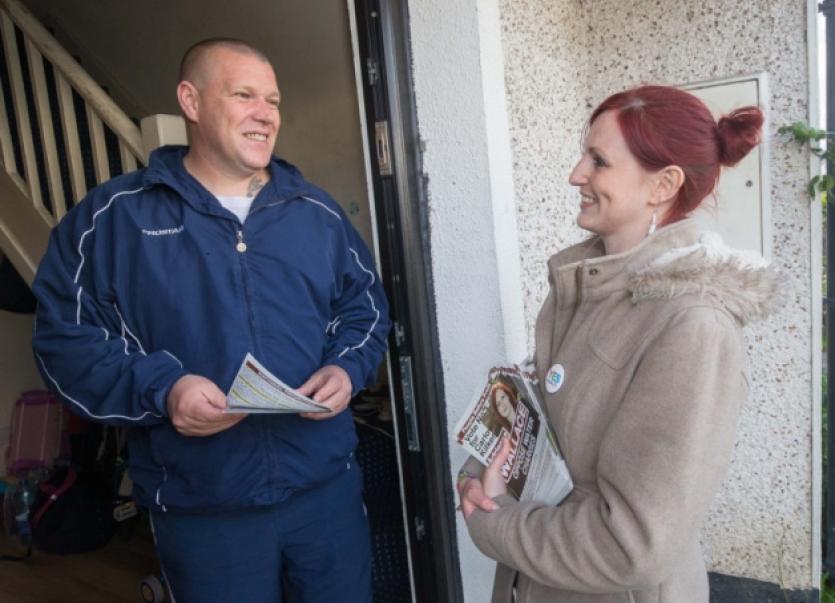 People Before Profit by-election candidate Adrienne Wallace has a large team with her when we arrive to canvass the Butts in Kilkenny City.

People Before Profit by-election candidate Adrienne Wallace has a large team with her when we arrive to canvass the Butts in Kilkenny City.

It’s the Carlow woman’s first time to contest an election, but it’s clear that there are plenty of people willing to come out and get behind her campaign. So what are the big issues coming up on the doorsteps?

“Irish Water is the main one,” she says.

“But there’s also the lack of investment in community areas and community services. There’s social housing – some people are waiting 14 years for a house. Really, people want to know what they are paying taxes for.”

“We want people to have a say,” she says.

“We need to get the system working again. We need a complete overhaul – there is no point in voting for people who won’t change the structure. I’m pushing for people power.”

At one house, two men are sitting outside enjoying the last of the evening’s sunshine. They are in agreement with her critical views on the Government. Affable and politely confident, she asks if they are voting (they are), and they agree to read her literature.

Next door, Kevin Woods answers the door and has a chat with Adrienne. The first topic is the recently-arrived bills from Irish Water.

Adrienne says that water is a human right, which should be paid for by ‘progressive taxation’.

“People are afraid,” she says, referring to elderly people unsure of what they should do with the bills.

At the gate, we meet another man who has come across the road to talk to Adrienne.The 24-year-old says he has been looking for a house and has struggled to find anything.

His rent allowance is too low to afford anything currently on the market, and he has been moving from house to house, relative to relative just keeping a roof over his head.

“Do what you can – I will be put out on the street,” he tells Adrienne, before pledging to vote for her.

I move away to speak to some of the supporters knocking on doors for her further up along.

Helena Davis and her son Cody Davis are part of the campaign team. They say the reception for People Before Profit’s message is by and large a positive one.

“We’ve had two houses already here where they went to close the door, but then saw that we weren’t any of the main parties,” says Helena.

“Sometimes, before you can say a word, they will ask ‘what party?’ Overall, it is a good reception.”

As we come back to where we left Adrienne, the young man facing homelessness from earlier has volunteered himself to go door-to-door to his neighbour’s houses handing out the leaflets. An indication of a good canvass.