Plenty of fresh air, plain food and hard work are the recipes for a long and happy life, she says 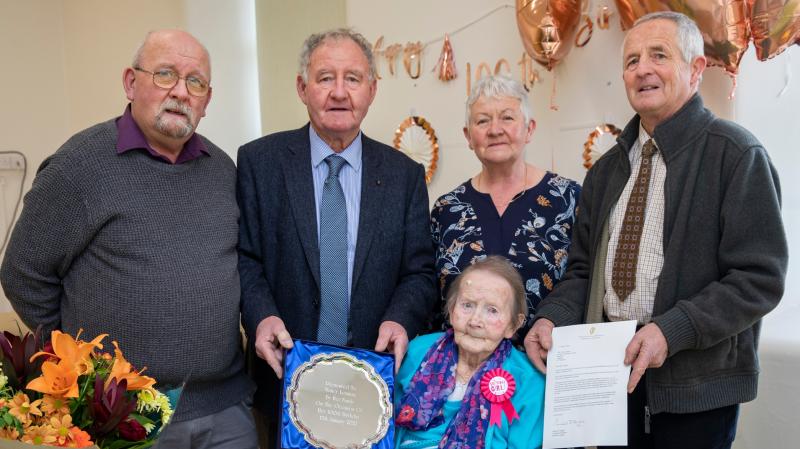 Plenty of fresh air, plain food and hard work are the recipes for a long and happy life.

That’s the message from Nancy Lennon; and having celebrated her 100th birthday last week, she should know.

“If you don’t stay out in the fresh air you’re finished,” said Nancy, a resident of St Anthony’s unit in Clonmel.

“I don’t smoke or drink and I like plain food. We didn’t eat junk food, we didn’t get it. I don’t overeat, I never eat big meals, it’s always small and often,” says Nancy, who also loves a cup of tea, and was very well-known for her stews and homemade jam.  Smoking was quite fashionable when she was younger, but it’s a habit from which she wisely steered clear.

Although she has lived in Clonmel for most of her long and happy life, Nancy was born in Kilkenny and remains a proud Kilkenny woman. She was born into a farming family in Julianstown, Castlecomer, on January 17, 1922, at a time when Ireland was enduring the birth pangs of a new nation.

The Anglo-Irish Treaty had been ratified 10 days before she was born but the Civil War was to erupt later that year and rage for the best part of 12 months, with General Michael Collins assassinated in West Cork in August. Also in 1922, the President of the United States, Warren G Harding, introduced the first radio in the White House in January, while the Ottoman Empire was abolished in November after 600 years.

She was christened Anne Nancy Tynan but, for the last century, has been known to all and sundry as Nancy. She came to Clonmel in the early 1940s to help out in the bar of the Ormonde Hotel in Gladstone Street for what she presumed would be a short spell. But she’s still living in the town, almost 80 years later.

Shortly after her arrival she met Stephen Lennon, originally from Tullycara in Castleblayney, Monaghan, who had moved to Clonmel with the army during the Emergency.

The couple met when Nancy was assistant manager of the Spanish Arms, the guesthouse and lounge bar near the bus and railway station, that later became known as Bates’ and Cooper’s. One of her colleagues suggested to Nancy that she should go and listen to Stephen speaking, because she couldn’t understand his Northern Irish accent. As they say, the rest is history.

Nancy and Stephen were married in 1947 and lived for a short time at King’s Close on King Street before setting up home with their family in the old schoolhouse in Powerstown, opposite the church, in 1952.

A few years later they opened a shop at the front of the house selling groceries and newspapers. The shop also sold sweets, which meant it was a popular meeting place for local children on their way home from school.

The couple raised a family of five children - Bernard, Jerome, Deirdre (McSherry, who died at the age of 51 in 2003), Stephen and Anne Marie (Cosgrave).

A well-known stone mason, Stephen senior also served as a foreman with sign makers Currans, and died in 1994 at the age of 77.

Despite her many years spent in Clonmel, a hint of a Kilkenny accent is still evident when Nancy speaks.

She gets the Kilkenny People and The Nationalist every week without fail and reads both newspapers from cover to cover, which keeps her up to date with all the news and sport from her home county and her adopted county. She also reads the Irish Independent every day.

“I like world affairs and all that but I don’t have much time for television,” she said. “I prefer to read a book.”

She also keeps in touch with her relations and friends in Kilkenny, and one of the nicest surprises she received last week was a birthday card from her hero, legendary Kilkenny hurler Henry Shefflin (above), which she treasures almost as much as the letter and cheque she received from President Michael D Higgins on her special birthday.

She knew another famous hurler, Tipperary’s Theo English, from his time spent working in Currans with her late husband Stephen.

Throughout her life Nancy was actively involved with Powerstown Lisronagh ICA, serving as the branch’s president, and also enjoyed her trips to Lourdes, both as a pilgrim and a helper.

For the last five years Nancy has been a resident of St Anthony’s unit.

“It’s a friendly place and they look after me very well,” she said.

Longevity is also in the genes, as she proudly says that her grandfather lived to the age of 98.

For someone so advanced in years, Nancy is remarkably hale and hearty, both physically and mentally, and only wears spectacles for reading.

“I’m alright. Please God, the man above will leave me here for another while,” said Nancy, who is wished many more years of health and happiness.