Pictures from the event below 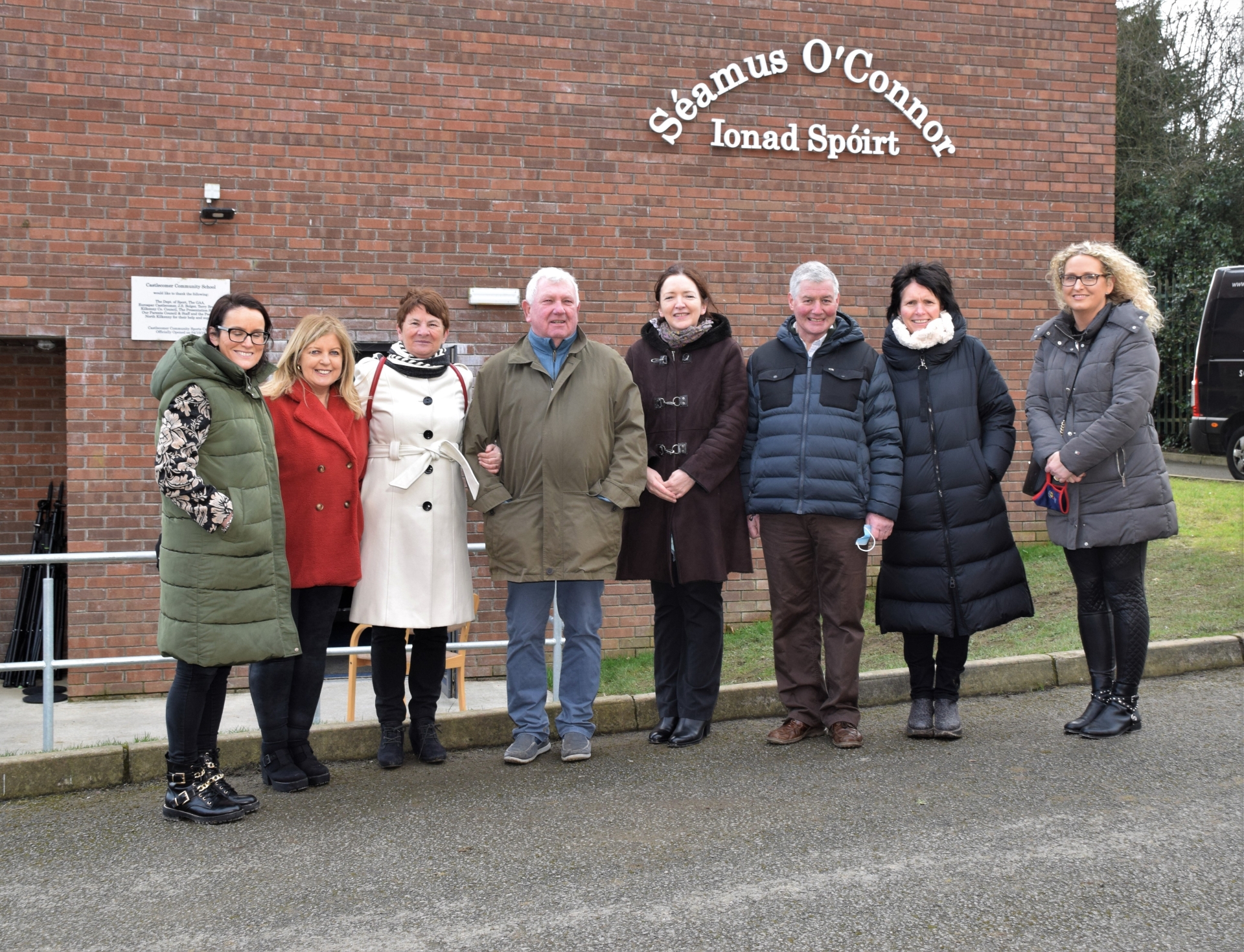 Séamus O’Connor, an extraordinary man with a love for family, education, sport and Castlecomer Community School was remembered on a beautiful bright morning last week.

His community of family, friends, colleagues, students and welcomed guests gathered to commemorate the man who made a huge impact on so many.

Séamus joined Castlecomer CS in 1985 and as a young 22-year-old he set forth to make a huge positive impact on the school community where he would become affectionately known as ‘The Boss’.

In 2005, Séamus became the fourth Principal of Castlecomer Community School. He would become its longest serving. As principal he would establish himself as an innovator. This tenure saw the establishment of two ASD classrooms and an incredible redevelopment of the school’s sports facilities.

Inside the classroom Séamus never shied away from modernisation. His Masters in Innovative Teaching and Learning ensured he was well placed that his students would be exposed to only the most cutting edge educational practices.

His commitment to teaching and learning in the classroom and his extraordinary contribution to the extra-curricular life in Castlecomer ensured he was a well respected and much loved colleague, leader, teacher and friend to many.

Séamus had a great love for sport and competition, both as spectator and coach – Séamus was part of the management team which saw Castlecomer CS win its first and only Roinn A All-Ireland College’s title in 1987 as well as a number of B All Ireland titles in the subsequent years.

Séamus contribution to community was also reorganised outside school. He was a prominent volunteer in Dicksboro Camogie, Evergreen FC and Kilkenny City Harriers where his beloved children Luke, Ciara and Annie competed.
Séamus and his beloved with Sheila supported their children in all their endeavors. It was clear to everyone who knew Séamus how much he loved his wife Sheila and their three children.

CONTRIBUTION
To honour and celebrate all Séamus’ contribution, dedication and support, the community — Séamus’ community – gathered on a beautiful bright winter morning to unveil the opening new sports facilities and bench named in Séamus’s honour.
The ceremony opened with the school trad band followed by a speech by Principal of Castlecomer Community School Pat Murphy, who spoke very highly of his friend and colleague. He spoke of the appropriateness of the trad band opening the ceremony.

“Séamus O’Connor both as school principal and in his family life was a great believer in the power of music to have a positive influence in the lives of young people,” he said.

He then called on Monsignor Ryan and Annie O’Connor to speak. Annie, Séamus’s daughter spoke with great pride and love for her father. It was a poignant and moving moment for the O’Connor family.

Mr Murphy then spoke about how Séamus ‘set out on a mission to revamp our school facilities... without the vision and perseverance of Séamus O’Connor it would not have been achieved’.

Mr Murphy then invited the O’Connor family to open the sports centre and to unveil the name of the new sports centre, ‘Séamus O’Connor Ionaid Spoirt’.

Vice Principal Peter O’Donovan then spoke with great dignity of his friend, colleague and mentor Séamus. He reminded the community to celebrate ‘the abundance of precious memories that Séamus has left us all... the incredible influence on us as students, as teachers, as people’.

Mr O’Donovan spoke emotionally of how Séamus O’Connor ‘backed every student to the hilt’.

“He wanted everyone in our school community to do well, our students, our staff and our families,” he said.
To further commemorate Séamus, the school has erected a limestone bench. A bench for many is a symbol of friendship, a place to meet, a place to sit and talk, a place to bring a community together.

Engraved on one side of the bench is Séamus’ name and on the other side is ‘C’mon ‘Comer’, a shout often roared by Séamus at school matches.

Mr O’Donovan hopes that for decades to come people will sit on Séamus’ bench and chat while supporting school teams.
Mr O’Donovan invited the O’Connor family to unveil the bench and all were encouraged to visit the bench in their own time.

To close the ceremony the school choir raised their voices high with a beautiful rendition of the Curragh of Kildare, to honour Mr O’Connor’s home town.

The entire community of family and friends, teachers and students joined the choir. Voices united in a local community school on a bright February morning for a great man Séamus O’Connor — the Boss.