Kathleen was diagnosed with MS 21 years ago

Kathleen and Mike Stapleton live in Ballyragget and they have gone through a lot in the last 21 years.

From a point where they were told that Kathleen’s illness was ‘all in her head’ to today, where she is part of a ground-breaking project using robotic technology to help people walk. It’s been a rollercoaster journey, but one where they have learned many lessons and cherished the positive experiences.

Teenage sweethearts, Kathleen and Mike started to notice what turned out to be symptoms of Multiple Sclerosis when Kathleen was just 18. She started getting numbness in her leg, which got worse as time went on. But then the symptoms went away for a long time.
Some time later Kathleen began to get a severe pain in her arm and shoulder, Mike described those first signs. This went on for a while.

Kathleen was a young mother and very active, loved walking with her friends. One day a friend rang Mike, after she’d been for a walk with Kathleen. She was worried. Kathleen seemed ‘wobbly,’ was she drinking at home? She wasn’t, but the symptoms were now becoming more obvious and Mike was really worried.

“We went to the doctor, we went to St Luke’s, but we were brushed off. Kathleen was told she needed physiotherapy, but there was no-one more active than Kathleen,” Mike said.
It came to a head when Kathleen went to a funeral in Paulstown, one day, and had a fall.
Mike was working in Dublin in those days, and immediately got the train back to Kilkenny. Again, they went to a doctor, and to St Luke’s. This time Kathleen was admitted.

More than 20 years ago a lot less was known about MS and how to diagnose it. Even with all her symptoms, advice from doctors differed.
They met one young doctor who did a lot of tests and he was not happy with what he saw. He arranged for Kathleen to undergo an MRI. But another doctor told Mike that it was all in Kathleen’s mind. The next day, before Kathleen was taken to Limerick for the MRI a doctor told Kathleen she was wasting the time of the ambulance crew and ambulance.

Kathleen went to Limerick for the scan. That evening Mike got a call from the hospital to be with Kathleen the next day for those results.
They knew something was wrong when a doctor hovered around the ward door and wouldn’t speak to them until joined by a nurse. ‘The news is bad’ the doctor said when she eventually joined them.

Dreadful Fear
“We had four young children. In my head the game was up,” Mike described his dreadful fear in that moment that his wife would be diagnosed with a terminal tumour.
‘You have multiple sclerosis,’ the tearful doctor told Kathleen. Mike’s response was to exclaim ‘oh Jesus, thank God,’ because, he said, he knew people with MS and he knew they were living with it.
After five or six years of symptoms and looking for a diagnosis they finally had one.

Multiple Sclerosis is a life-changing condition. It’s an autoimmune condition that affects the brain and spinal cord.
Twenty-one years ago it was so hard to get a diagnosis, Mike explained. For Kathleen the diagnosis was a ‘pure relief.’ The first thing she said to Mike was that she wasn’t ‘mad’.
Today, getting a diagnosis is a very different situation and people are checked for it a lot.

Once Kathleen got into the system, ‘people were brilliant.’ She got to see a neurologist and a pain specialist. Mike had seen his wife at times in severe pain. It was explained to them that it was nerve pain and one day it would just stop. Pain killers did nothing to ease the pain when Kathleen was struck with it, but then one day the pain did ease and, over a few months, went away.

“I found once we were in the system they were brilliant. The equipment we have in this house for Kathleen is second to none,” Mike said. She was able to avail of occupational therapy, physiotherapy and speech therapy. “Anything we needed. They are brilliant, I can’t fault them,” Mike said of the HSE.
He also has great praise for Castlecomer District Hospital where Kathleen goes for respite care. “The care she gets there, I can’t say enough good about the hospital in Castlecomer,” Mike said.
The family are also supported by homecare hours and Mike said the Irish Wheelchair Association ladies “are brilliant, kind, nice people. As good as you can get.” He paid tribute to Carers Ireland and Sage for helping them get that support . 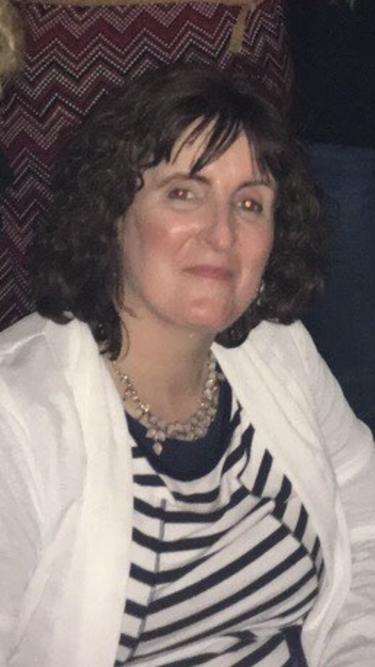 Mike had special praise for Katie Hourigan, the regional community worker with MS Ireland in Kilkenny, and South East co-ordinator. The organisation doesn’t just support people with an MS diagnosis, but also their families.
“When I hit a wall, I rang her,” Mike said. He had been caring for Kathleen and at the time she had worrying health difficulties. He was tired and stressed. “Kathleen’s health is brilliant at the minute, but there were times when I didn’t know where to turn,” he said. “Five or six years ago Kathleen’s health was really bad. I didn’t know what to do or where to turn. I said ‘I can’t give up’ but I thought I’d have to. I rang Katie at 3pm one day. She was here the next day.”

Katie, and all who help in MS Ireland, understand what’s happening and are able to answer questions. They can put those with MS and their families in touch with organisations who can help and other supports.

When Mike wanted to get Kathleen walking again Katie put him in touch with Dr Paul Carroll at the National Rehabilitation Hospital in DunLaoighre. Dr Carroll enrolled Kathleen in a six-week programme at the Royal Hospital in Donnybrook.
At the time Kathleen’s health wasn’t great. She had been back in St Luke’s and there wasn’t any more they could do for her. It was a low point but Dr Carroll said it was exactly the way he wanted her. Kathleen never looked back. The new treatments ‘turned her life around,’ Mike recommended anyone with MS to look into the treatment provided there. “It was a miracle,” he said.

These days, Kathleen uses a wheelchair, but she is full of life. Science is giving her amazing hope.
A chance viewing of the Late Late Show, one Friday night, led Kathleen to her next adventure. She and Mike were watching as Ronan Langan from Dublin City University (DCU) Exoskeleton Programme showcased how it is helping people to walk. Kathleen was in tears just watching. Their daughter was also watching and that very night sent an email to DCU. The next Monday they made contact with Kathleen and she was signed up.

The exoskeleton programme “has changed Kathleen’s world,” Mike said. The first day Ronan Langan fitted her to the robotics and she stood up Mike could see pure joy on his wife’s face. “The next thing she was off walking around the gym!

“It’s a game changer. We go to DCU once a week and I’m being trained to use the robot myself,” Mike said. In the future they hope the robotic equipment can be used outside the university setting.
The DCU programme is designed to deliver an array of benefits that regular walking in an exoskeleton provides for persons with spinal cord injury, stroke, multiple sclerosis and other neurological conditions. 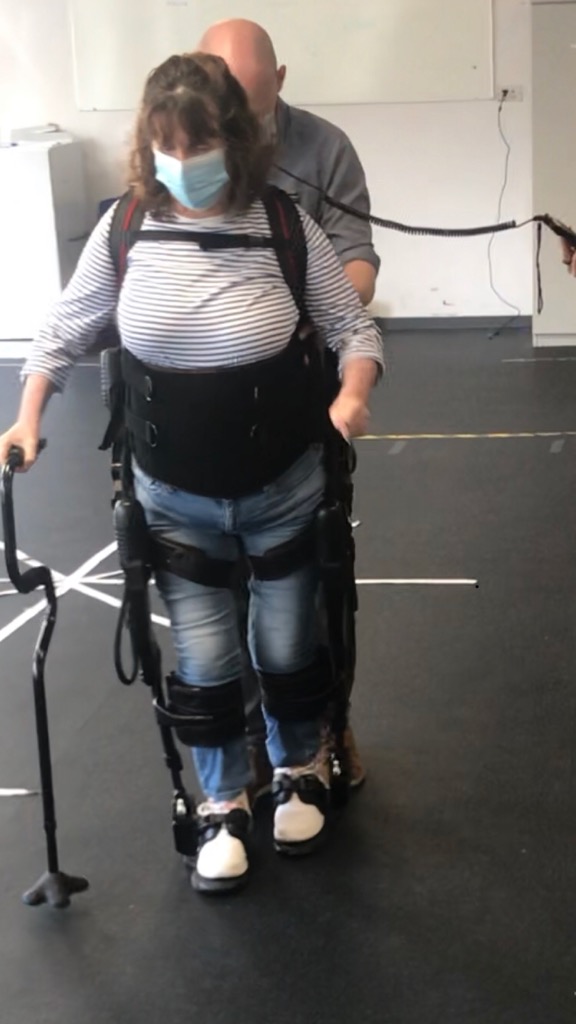 “Everything now is so positive, so good. Over the years it was tough for Kathleen and me, and very tough on our children. They are amazing, so good to us.”
Mark and Kathleen want people to know that while a diagnosis of MS is a serious one, there are a lot of reasons to be hopeful. They also want people to know there is wonderful support available to them from MS Ireland. The support and human kindness Mike and Kathleen have experienced has made a huge difference to their lives.

Some 9,000 people in Ireland are living with MS. If you have any queries relating to MS you are invited to call the MS Information Line 1850-233233 which is available Monday to Friday, 9.30am to 1.30pm. All calls are strictly confidential.