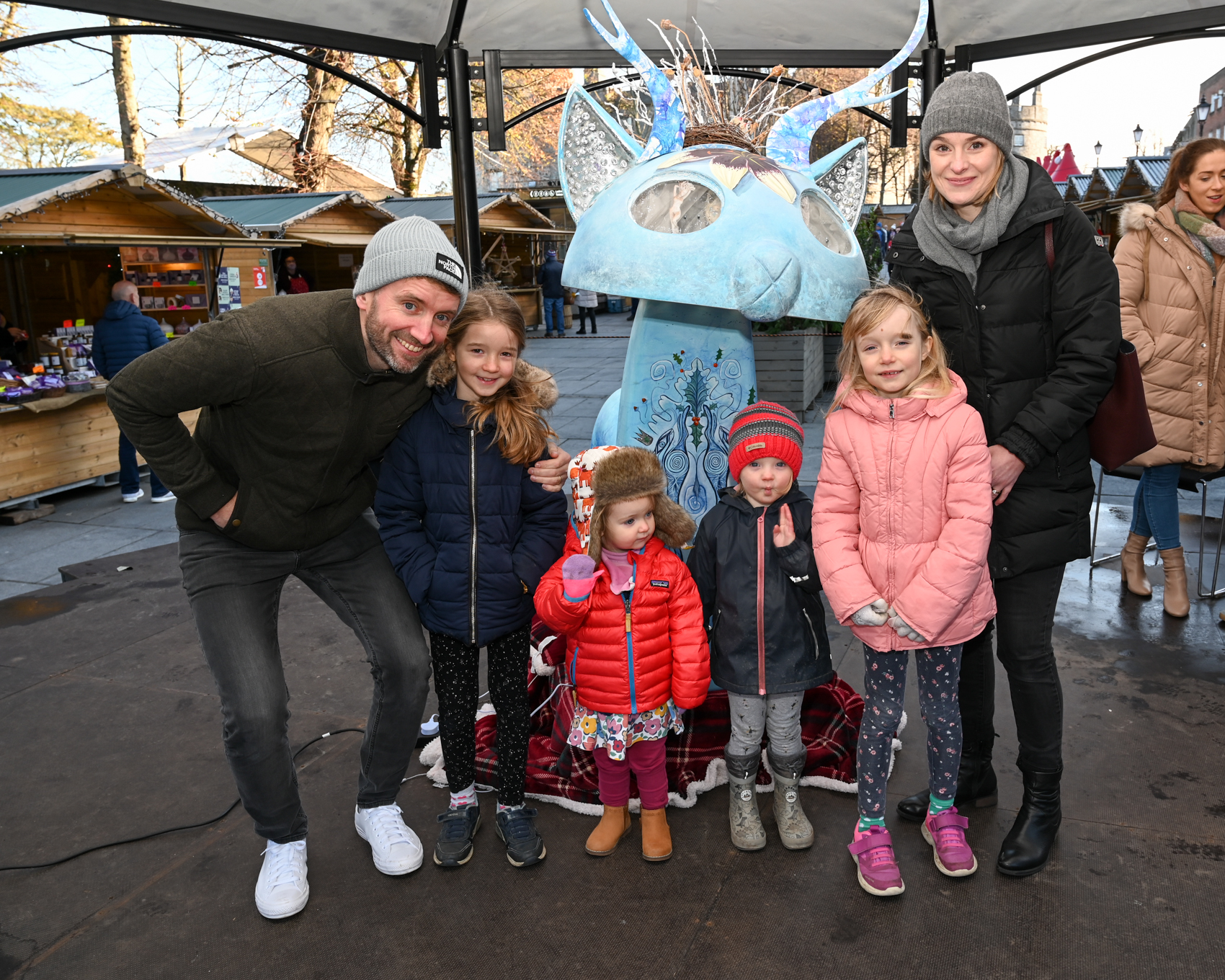 One of Ireland’s mythical animals has become the latest addition to Kilkenny’s CatWalk.
Pangur Bán, who is featured in what is thought to be one of Ireland’s oldest poems, has found a home in the medieval Marble City.

Having played a central role in Cartoon Saloon’s Oscar-nominated The Secret of Kells animated movie in 2009, Pangur Bán has again inspired a local artistic family to create the 22nd addition to the trail, which was specially commissioned by the city’s Yulefest Christmas festival and Kilkenny Civic Trust.

The piece was jointly created by abstract artist Brock Butler and his daughters, fine artist Jade Butler and illustrator and sculptor Blaise Butler.

The statue was unveiled by Cartoon Saloon’s Director Paul Young and his daughter Robyn at the city’s Parade area, in front of Kilkenny Castle, which is hosting the city’s Christmas Market and a myriad of musical, theatrical and artistic events at the heart of the annual Christmas festival.

“This latest catwalk statue is a wonderful celebration of the medieval culture of our city,” said Colette Byrne, Civic Trust chairperson. “It has a central connection to the magnificent work of Cartoon Saloon who celebrate this medieval culture through the innovative use of animation techniques which are beautiful, creative, thoroughly modern but still respectful of the culture of art and literature we exported all over Europe.

“The interpretation of the Pangur Bán character, who we remember with fondness from our school days, breathes new life into this most ancient of feline stars,” she added.

“The intergenerational collaboration between the two generations of the Butler family show that these traditions are in safe hands. I look forward to them inspiring the next generation of creative children, both local and those who visit our city to celebrate the Christmas season.”

Brock Butler has been exhibiting in Kilkenny for many years and has also shown in Dublin, Galway, Belfast, Edinburgh  and London  as well as at various arts festivals and international art fairs. He has three times been awarded Government per cent for art commissions. Collectors of his work include financier Dermot Desmond and Senator David Norris, while he is also included in numerous hotel collections around the country.

Jade Butler has been emerging in recent years as a name to watch in the art world. Graduating from West Wales School of the Arts in 2010, her current work is primarily contemporary still life in oils. Her work has been selected for the prestigious annual exhibition of The Royal Hibernian Academy , as well as The Royal Ulster Academy and The Royal Scottish Academy.

Her paintings are held in private collections in Europe and America and several public collections including the Office of Public Works Northern Ireland.

Both Brock and Jade had paintings included in the recent Butler Gallery fundraising auction at Lyrath Estate last month. The auction raised over €60,000 for the city’s municipal contemporary art gallery.
Blaise Butler is an illustrator and sculptor. Using her middle name Pandora, her work can be seen on Instagram as blaisepandoraart. She most recently exhibited her sculptures at The Secret Garden Exhibition during Kilkenny Arts Festival 2021.

Having lived in Australia for several years, where she expanded her artistic range, working for some time with a studio of tattoo artists - she has now returned to Kilkenny and has also returned to Art School to extend her skills even further, studying ceramics at Grennan Mill.

The Kilkenny Catwalk is a trail of wonderful Kilkenny Cat sculptures which have been decorated by some of Ireland’s most talented artists, mainly local, on public display in and around Kilkenny City.
This arts project is a partnership project between Kilkenny Civic Trust and Kilkenny County Council which can be engaged with outdoors, whilst adhering to physical distancing requirements, regardless of restrictions.

The Cat Walk art trail is fun, bright and engaging and will bring a smile to people’s faces and support the Keep Well Campaign.
People are invited to get outdoors and follow the trail. For more see www.kilkennycatwalk.ie