IN A GREAT PLACE 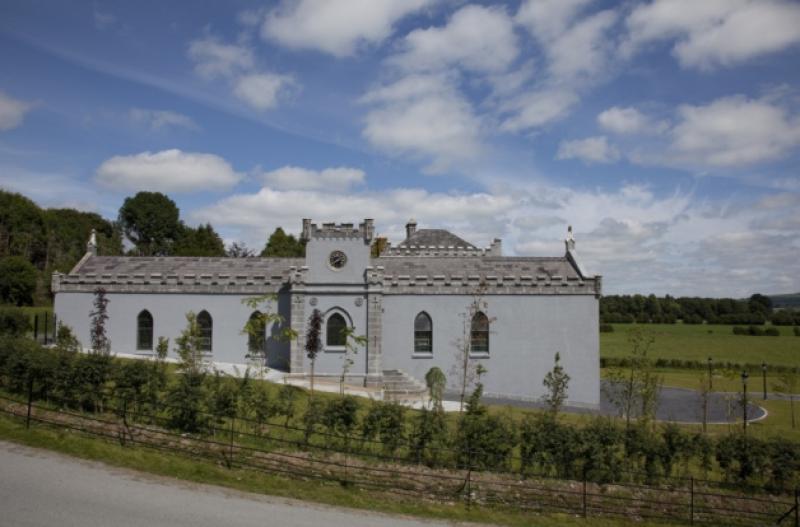 A week to opening night at the Thomas Moore theatre in Jenkinstown, Jimmy MacCarthy is certainly in a great place.

A week to opening night at the Thomas Moore theatre in Jenkinstown, Jimmy MacCarthy is certainly in a great place.

It’s Thursday last and the proud owner of Jenkinstown House is preparing for a concert very much on home ground - the inaugural musical event at a theatre with a difference - tomorrow night, November 14.

It promises to be an exceptional evening. One suggests intimate? Quick as a flash, Jimmy jokes that no-one will be staying the night. Jimmy MacCarthy is opening up part of his home, his own theatre, to his fans and that surely is something special.

Back in 2006, while on a property prowl - and who wasn’t back then - the Cork man and Wicklow resident was searching for a new home. By his own admission, his roots in Cork were calling. But then he saw Jenkinstown House.

No room for a theatre, or even a studio which he enjoyed in Rathnew. Further investigation uncovered the property came in three lots, one of which was a church which needed extensive renovation. A former scouts den, this old church would be ideal for Jimmy’s needs. And so the Jenkinstown House project began, and the Thomas Moore theatre created.

What sealed the deal on Jenkinstown?

“When I realised Thomas Moore wrote the haunting ‘Last Rose of Summer’ here, I said, that’s mine,” said Jimmy.

Jenkinstown House is truly fabulous, lovingly restored not just to a former glory, but very much a present one. The house itself enjoyed its heyday in the Victorian era but it’s architecture is somewhat mixed, Gothic windows very obvious at the front. Jimmy’s attention to detail in the renovation is everywhere. It seems he has renovated his home just as he would write a song - there’s a warm flow throughout, and a pause for thought at every corner.

It wasn’t an easy process, and there were distractions and delays on the way. But in the end Jimmy prevailed and has provided Kilkenny with a real gem.

The house and courtyard are truly resplendent. The attention to detail in the two drawing rooms and dining area is simply divine. The plaster work in one drawing room - indeed the entire house - is recreated from old photographs. And the woodwork is from traditional Irish oak, with a fantastic staircase leading off the aforementioned drawing room to a splendid dining hall.

What the fans will see tomorrow night is the theatre. And it was an old church and in that respect it is restored to such an extent that the previous families who donated stainless glass windows, those windows still remain. That was important to Jimmy. And the reminders that it was once a scouts den is very evident.

Renowned as one of Ireland’s greatest song writers, the Cork man has taken Kilkenny, and in particular Conahy to his heart. Tomorrow night, 106 lucky souls will sit comfortably in the renovated church - now the Thomas Moore Theatre and studio, for an evening with Jimmy MacCarthy, an evening certainly with a difference. He will hold a third concert for his neighbours early in the New Year. After an enjoyable tour, the owner of Jenkinstown House sits down for a cup of tea and a chat. Talk of the tour is imminent, halfway through a diary full of gigs. “It’s been extra special,” says Jimmy and of course you have to ask why. And he just picks up a guitar from the kitchen table, and starts to play.

“I only play Spanish guitar,” he says, as he goes through the notes with ease. “Such an amazing instrument. This is my new one, it has something the other ones don’t have. Not plugged in, not electrified, tiny bug mic here, it doesn’t sound electric...It’s got soul, something steel doesn’t have, something about the wood and nylon.” For those couple of minutes, Jimmy is lost in his music, as he extols the virtues of the Spanish guitar, discovered as you would imagine in Spain, and he has settled on a mid range model. And I am privileged. One of Ireland’s most gifted song writers, the man who wrote ‘Ride On’ and here I am in his kitchen, he has just picked up his guitar, just me and his two dogs for an audience. Extra special indeed.

MacCarthy’s repertoire is full of timeless classics, and his local fans lucky enough to get tickets for November 14 and December 17 through his web site are sure to have one of the most memorable nights of their lives.

For Jimmy MacCarthy, the Conahy area is particularly special. “There are great people here, when they take something on, failure is not an option. They’re extraordinary, its there. I grew up in Cork city, in the suburbs yet I have always been drawn to the country. Horses were a huge part of my life, I am still drawn to horses, but I love the rural way of life,” he added.

“Farming here is great. I think farmers have become brilliant in their field. I am not that familiar with farming across the board. But here locally they know what they’re doing. I think that’s helped Kilkenny as a town to stay buoyant unlike other towns. Also the ingenuity of people in Kilkenny like Eamon Langton, and the festivals that are run they keep things going out of creativity in ways that other towns just don’t.”

He remains optimistic.“I do think that economically things are on the up, and they are on the up purely on the backs of Irish people, the return is not through any ingenuity or creative brilliance of our leaders. But on the backs and the hardship suffered by the citizens of Ireland. That’s the bottom line. If they come around in the next election and say we did this and we did that - no they didn’t. The Irish people took it right on the chin without much choice, but that’s where the success has come. It is improving. If you look at America, what happens there generally happens everywhere else. It’s like when America sneezes, the world catches cold. I think that the children, your children and the children in America will end up paying for this. And I don’t think all this is by accident but by seamless design.”

“Times change and what you ponder changes. It’s my opinion that we are here to give birth to ourselves spiritually and to return to the one from which we came.

I think the environment of the world we now live in makes it difficult, but it’s the most important job we have and can be one of the most difficult. The conditions of the new world that we live in it makes it very hard, especially for the younger generation.

“I remember in 1956 going to Mass and seeing all the donkeys and carts, I remember the pureness of normal life, but people who were born in the last 15 or 20 years, they don’t remember it...It’s medieval to them. The speed of change between 1950 and 2000 far exceeds the speed of change between 1000 and 1950 by multiples, that’s a scary thought. Are we built to be like that? It isn’t that I think technology is the problem, I think those who are designing how the technology works and how it can be taken advantage of is the problem.”

Jimmy observes. And what seems to trouble him most is what young people are going through. “The acceleration of change has had negative impacts. People have lost touch with each other on account of communication today, and that’s a strange thing to say but a lot of it is superficial. Electronic communication is not meeting someone, you don’t have to be truthful.” You can tell, that more than annoys him. He looks back on simpler times, better times.

Jimmy MacCarthy is in a great place, and for two nights over the next month, over 200 concert goers will be too.