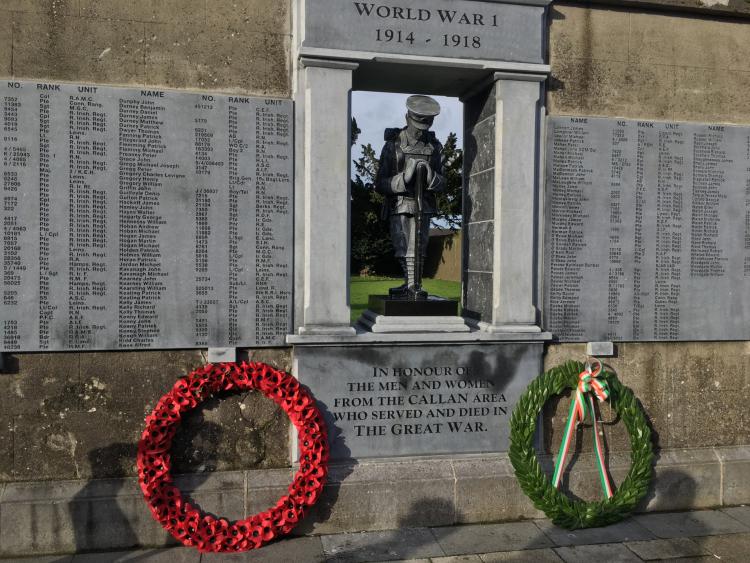 On the morning of the eleventh of November 1918 at eleven minutes past eleven, silence fell on the battle fields of the Great War.
That day was to become known as Armistice Day. The wave of destruction and death over the four years came at a very high price with over 10,000,000 military personnel on all sides perishing during the horrible war. Many more returned from the battlefields scarred and maimed for life.

When the Treaty of Versailles was signed by Germany and the Allied nation on June 28th 1919 it formally ended what is now known as World War I.
It was said it was the War to end all wars but history in the past one hundred years tells a very different story.

Last Sunday 11th November 2018 millions of people in Ireland, France, Britain and Belgium gathered to remember that faithful day one hundred years ago.
Callan remembered last Sunday and perhaps Callan has remembered for many years.
Its tradition of being an old garrison town with still many direct descendants living in and around the town and parish to this day.
The beautiful memorial that was unveiled in August 2016 is a testament to those who worked tirelessly to make it happen.

The hard work of fundraising along with the help of Leader Funding, the kind donation of the site by Parish Priest Father Willie Dalton and also Molloy and Son memorial stone masons made it happen and now on the 11th of November each year we can gather to remember the near 300 men and women from Callan who served in the First World War.

Last Sunday with beautiful blue skies over head a large group of people gathered at 10.30pm to commemorate with prayers and readings and wonderful music from Michael Dawson and John Ryan.
Unfortunately work took me west to Galway so I wasn’t able to attend the Callan memorial but I had the pleasure of attending a wonderful Church of Ireland Remembrance Day service at Saint Nicolas Collegiate Church Galway. The ancient church in the middle of Galway dating from 1320 was packed to capacity for the special occasion. A specia wreath laying ceremony took place at the memorial Celtic Cross inside the church and after the ceremony all the names of the near eleven hundred people that joined from Galway were displayed on information boards.

It is surprising that a city of its size and with so many joining from the area that did not have a dedicated War memorial on display in public. I met two men after the ceremony one that had served in the British Army and the other in the Irish defence forces. I told them I lived in Kilkenny and told them about the memorials in Callan, Kilkenny and Ballingarry and wondered why Galway had not progressed on establishing one. They said they were aware of the memorials in this part of the world but as for Galway they are only in the early stages but Galway will have their own soon.