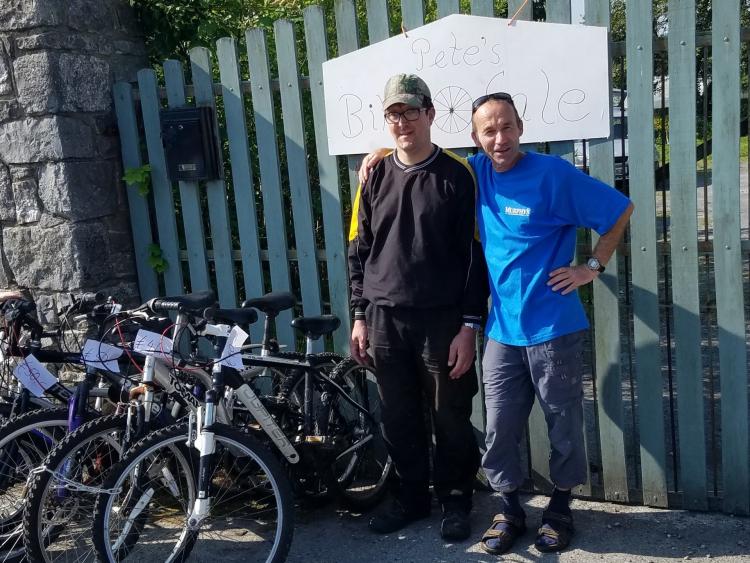 Bringing unwanted bikes back to life: Peter and Dieter show off some of the bicycles they have repaired and made ready for sale at the Callan workshop

A small bicycle workshop in south Kilkenny is hoping to become the spark of a new push to put cycling at the heart of Irish life.
Pete’s Community Bike Workshop is nestled away behind the local county council area office, in the former workhouse in Callan. In charge of Dieter Gerhardt and working with him are two trainees, Paul and Luca.

The workshop opened in Callan several years ago, under the Camphill banner, but Dieter has big plans for the project.
He is currently hard at work trying to open up a second workshop in Kilkenny city and a schools programme for later this year.
“The inspiration for this bike shop came from Ulick O’Byrne and Peter Lawlor, about four years ago. Ulick left in September 2017 and then Steve Barry took over the reigns together with Peter until mid- March 2018. So, I was very lucky to get in there at the early spring which coincides with the bike spring fever, Dieter said.

“We are in Callan a few years but we upped our game in the last year or two,” Dieter said. The workshop is a not-for-profit social enterprise. Dieter took over the reigns in recent times but trainee Peter has been there from the start. They were joined by Luca earlier this year. Both are Camphill residents nearby.

Peter and Luca train in bicycle repair and maintenance, under Dieter’s supervision. They repair and upgrade both children’s and adult bikes - many of which are for sale to the public at bargain prices.ustomers range from locals living in the same street, as well as people from Mullinahone to Dunnamaggin and Kilkenny who call for all sorts of reasons. “Families, bike enthusiasts with high spec top of the range to a hundred year old vintage bikes, pulled out of barns and sheds, we never refused an offer of a donated bike or the state of a bicycle. We were dealing and wheeling to our heart’s content and have a huge turnover of bikes and people alike.”

Dieter is now actively seeking a suitable premises in Kilkenny city where he can replicate the success of the Callan workshop. Again, the city workshop would be a social, not-for-profit enterprise with a training focus - which Dieter sees as the main part of the enterprise.
“It will bring unwanted bikes back to life and will be sold or passed on to users that want to get moving on two wheels,” he said.

Dieter also sees it as a place where people can get away from their keyboard and into real things, with oil and metal.
“I aim to inspire other interested participants, to develop a practice as a workshop facilitator and trainer and work as a team, offering courses and workshops on various aspects of bike maintenance, cycling skills, and educational / practical aspects to sustainability.”

An important feature for any future city premises is that it comes with a nominal rent, or even better no rent at all, as this is a not-for-profit project. Dieter would like to hear from anyone who has a potential premises.
They have a lot of support for the project, from groups as diverse as local cycling clubs in Kilkenny, Cartoon Saloon and Lifelink Kilkenny.

“To encourage participation in any meaningful way, we would also have a cosy corner, where people can chat, have tea, coffee, snacks and bring their lunch to share, have a chat, give and seek advice and build connections. The workshop will offer a service where users can use tools while being supervised and advised as well as annual membership. The shop will sell second hand bikes, parts, and cycling accessories and offer new bikes on demand, as well as partcipation in the Bike-to- Work Scheme.”

Dieter also sees working with schools as important to get younger people out and about on bicycles.

You can get a taste of the work of the cycling workshops in Kilkenny city next weekend with the Ciclovia festival.
Ciclovia is a fun day out for families and friends centred around bike activities. On The Parade in Kilkenny city, on Sunday, June 23, there will be a pop up velodrome, a balance bike course, electric bike demonstration, Street Athletics, unicycles, face painting, bling your bike, Children’s games (giant Jenga, Connect 4, chalk drawing) and children’s yoga.
Callan Bike Workshop will have its own stand where you can take part in bike maintenance workshops, see unicycle demonstrations and maybe even try your hand with the crazy bike - turn the handle bars one way and it goes the other way.
Check out Peter’s Bike Workshop on Facebook.