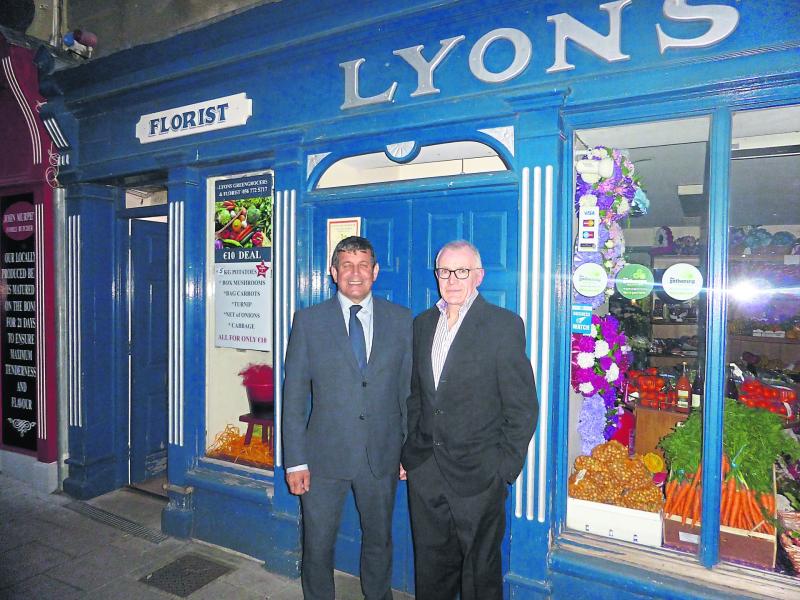 Joe Lyons outside his shop on Green Street, Callan, with Minister of State Andrew Doyle

There’s hand sanitiser at the door. Disinfectant wipes too. And inside at the counter Callan shopkeeper Joe Lyons is busier than ever.

It’s the strange paradox of the even more strange times we are living in. As people spend more time at home, with schools closed and working from home a necessity for many, the shops in Kilkenny’s smaller towns are experiencing a revival.

Joe Lyons, who is also a local Fine Gael councillor, has been seeing a lot of new faces through his shop door in recent days.
“It’s actually more busy now because a lot of people are around,” he explained. “People who used to travel from Callan every day to work in Kilkenny city, Clonmel, Waterford and Wexford are at home in Callan every day.
“People have said they are supporting small shops. We are getting a bit of a rejuvenation.”

Read also: Kilkenny bakery a model for all in this time of need

In the last 10 years a lot of new estates have sprung up around the town and it’s only now that this is starting to boost the town in many ways, Joe says.
The numbers attending local primary schools are growing and the numbers of people joining local clubs are also boosting their numbers.
It’s the many people living in Callan but who may have done their shopping while on breaks from work in these other towns that are now turning to the smaller shops in Callan. Joe is very happy to welcome all the new faces he sees coming through his door on West Street in Callan.

Another boost for local shops is the increase in people cooking at home.
The shop is both a vegetable shop and a florist.
Customer have been observing best social distancing practice, with people waiting outside if there is a customer inside. The good weather has helped with that.

Joe thinks people got a shock when they started to see the local figures for people diagnosed with coronavirus, and the increasing national number. The next two weeks will tell a lot, he said.

There is a great community spirit in Callan.
“Thank God old Ireland’s not dead,” Joe said as he paid tribute to the community groups in the town who are doing the running around for vulnerable people who are isolating in their homes. John Lockes GAA club and Callan Support Group “are great for people who can’t get out”.
“Everyone is taking precautions,” he said. “It’s hard for families that can’t visit but we are learning from Italy. They had no warning.”

With families looking for things to do it’s easy to park in Callan and go for a walk while maintaining social distancing, he also points out.
It’s with this in mind Joe had an idea - could the popular Callan bypass walking route be made one-way?
He’s spoken to the local county council staff about a sign and arrows and says that while you couldn’t force people to comply, it would help if everyone walked in the same direction so they are not passing and bumping into each other.
In another time it would be a crazy idea, but in our new reality it make sense to do it for a couple of weeks.