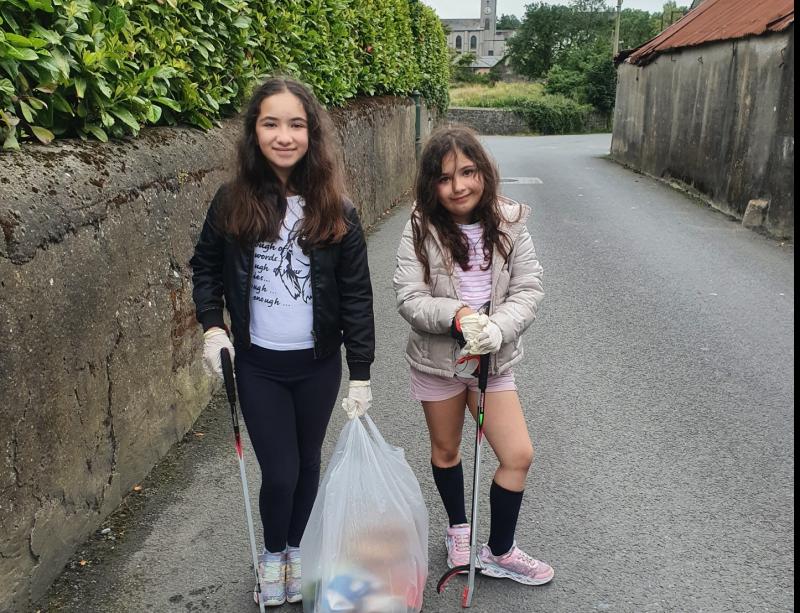 Annamaria and Sara working hard to collect litter around Callan

Two Callan girls have won many friends in the community, this summer, with their efforts at keeping the town free of litter.
Annamaria Wisniowska, who is 10, and her eight-year-old sister Sara were out and about with their litter pickers every day during the month of June.

The girls, who live with their family in Kings Court, Callan, both go to Bunscoil McAuley Rice, where Annamaria was in fourth class and Sara in second class when they started the project, which is also a fundraiser for a cause close to their hearts.
Annamaria and Sara love animals so they have dedicated their efforts to raising money to donate to the World Wildlife Fund (WWF) Adopt an Animal scheme.

The scheme gives WWF much needed funds to save endangered animals. Annamaria would love to adopt a jaguar and Sara a rhino.
WWF say there has been a catastrophic fall in the number of black rhinos while the habitat of jaguars is under siege like never before.

The girls had a very modest target of just €90 to adopt their two favourite animals, but promise that any money raised above that target will be donated to WWF or used to adopt other endangered animals.
Litter picking continued into July for the girls and they are still accepting donations on their Go Fund Me page click here.