It took just six days, nine hours and 46 minutes for Kilkenny’s heroic Team Aspect to cycle the entire 3000 miles across America!
In the early hours of Saturday morning, here in Ireland, the four-man cycling team and their support crew, crossed the finish line to great celebration.
Not only did the team complete the challenge, but they claimed the overall third place in the four-man race!

Supporters in Kilkenny and across the country were glued to the online, ‘real-time’ tracking of the race for more than six days. ‘Dot watchers’ cheered on the whole team as the excitement mounted and it looked like the lads were heading for a medal position.
It’s a fantastic achievement for the cyclist and crew, but most importantly for their fundraising efforts for the Aspect Centre at SOS Kilkenny. You can still CLICK HERE to donate to the fundraiser on Go Fund Me.
So far they have raised an amazing €12,000 for this very worthwhile cause. 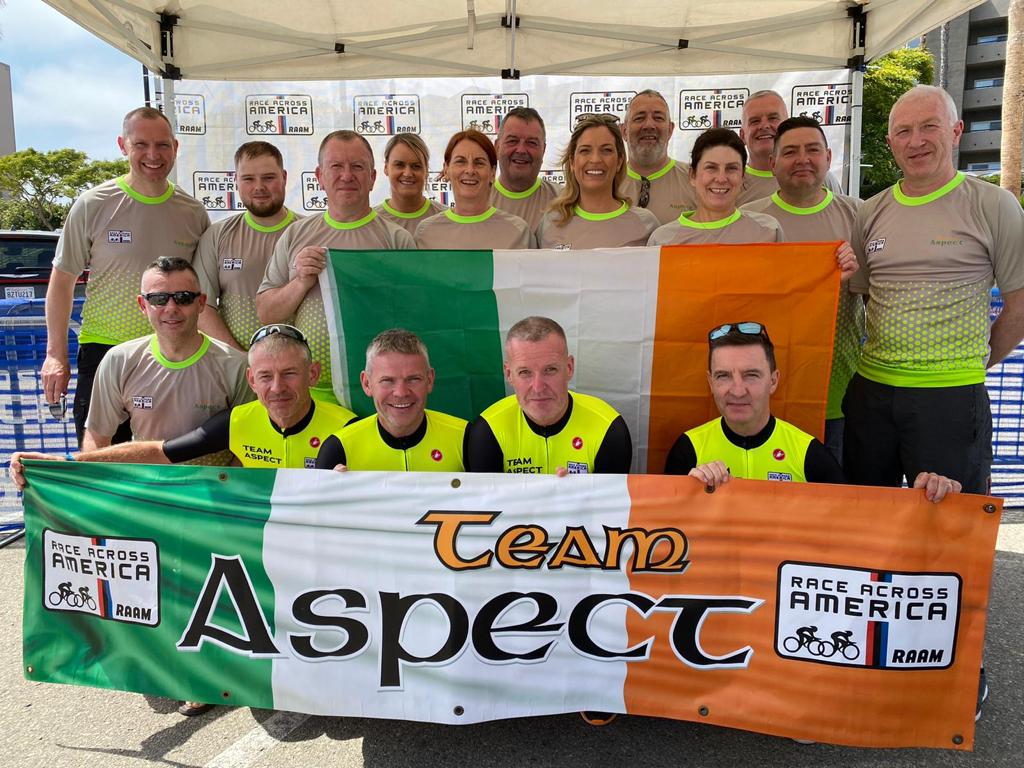 Above: The support crew with the cyclists they supported to the finish line, just before they set off from California for Race Across America

The Race Across America began on Saturday, June 18, in the town of Oceanside in California, and the finish line was in Maryland, in the town of Annapolis, taking them from the West Coast to the East Coast, through 12 states. A route of 3,000 miles (4,828km), over mountain roads, through hot deserts, cycling day and night.

Families, friends, colleagues and the whole community are so proud of the achievement of Team Aspect.
Check out Team Aspect on Facebook to see photos and videos of some of the spectacular scenery along the route.

Cyclists John Dowd, Phillip Culbert, Seamus Nash and Cathal Phillips, along with their crew, were competing for the second time in the Race Across America, one of the longest and most challenging endurance cycling events in the world.
A huge amount of work went into the effort even before the crew left Kilkenny, with the crew organising four vehicles on the road, maps, meals and rest breaks.