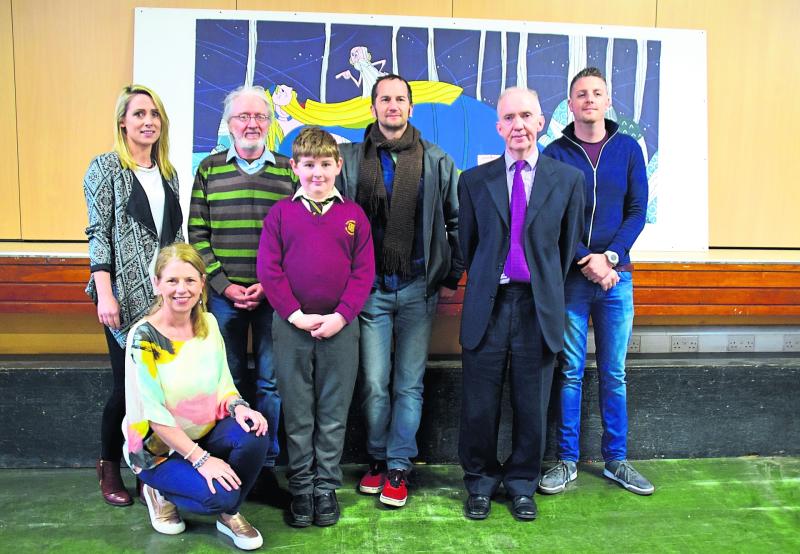 THE VILLAGE
Michael Moore
mlmoore@eircom.net
U-6 / 10 FOOTBALL BLITZ
The club's senior football full back, Cormac Behan reports that over 150 youngsters from Muckalee, Dicksboro, Mullinahone and James Stephens enjoyed a full day on Saturday last, honing their Gaelic football skills in Pairc Sheamuis Stiophain. Playing in three age groups, U-6, U-8 and U-10, some great skills were to be seen with the big ball, as well as and a few "ding, dong" battles between the eager young participants on a glorious sunny day. Well done to the Juvenile committee on yet another well organised event to help promote Gaelic football in the club and further afield.
U-16 LEAGUE
The U-16 hurlers continued their county U-16 "A" league title defence with a quality 0-19 to 0-10 victory over a strong Dicksboro side on Monday night in Larchfield. They already had beaten an impressive Naas (Co.Kildare) team in the first round of the 2017 campaign. Throughout the first half, Dicksboro exerted strong pressure but failed to convert their possession into scores, allowing the lively Village forwards, especially Eoin Guilfoyle, Cian Kenny and Leon Hayes to benefit from break-away attacks to score valuable points over the first 30 minutes. At half time the scoreboard read 0-8 to 0-5 in favour of James Stephens. Fortunate to have a strong centre core of players, with Jason Butler "lording it" at full back, Jim Ryan impressive in the centre of defence, hard grafting centre-fielders, Jamie O'Keeffe and Aodh O'Connor and quality forwards in Eoin Guilfoyle and Cian Kenny, nevertheless, the Village lads struggled to impose themselves on the dogged Dicksboro defence, and only led by 0-13 to 0-9 after 20 minutes of the second period. A point for Dicksboro on 23 minutes was immediately answered by an outstanding individual solo effort from Cian Kenny. Eventually, the 'Boro's defiance relented under a constant surge of Village attacks allowing the in-form, Eoin Guilfoyle -- 13 points in all --- to add a further 0-5 points to the James Stephens final tally. However, five days later, on Friday evening, disappointment was their lot as they went down, narrowly, 2-15 to 0-17 to neighbours, O'Loughlin Gaels in another high quality game of hurling. Leading by 0-10 to 0-9 in the final minute of the first half, they allowed O'Loughlins through for an unlikely goal, following a defensive mix-up to give the home club a 1-9 to 0-10 lead at the break. A second 'Gaels goal 12 minutes into the second half, made the James Stephens task of putting back-to-back victories together even more difficult. From there to the end, the Village lads gave "of their all", with Cian Kenny, Eoin Guilfoyle, Jason Butler, Leon Hayes and Aodh O'Connor particularly to the fore, but, they could not break down a solid O'Loughlin's defence for a match winning score. Despite the disappointment, it's all to play for, yet, in defence of their league title .
HURLER'S CO-OP DRAW
Tickets for the annual fundraiser to finance the training programme for Kilkenny county teams as well as helping clubs are now available. The tickets cost Eu 50.00 each for the five draws and may be purchased from club treasurer, Tom Keane or any committee member.
LOUGHBOY LIBRARY
Patrons should note that the library will close on Thursday (Holy Thursday) at 5p.m., and reopen on Tuesday 18th April at 10.a.m.. Caitriona and her staff wish all their customers a happy and peacefull Easter holiday break. Meanwhile, members can download ebooks, audiobooks and magazines, by logging on to www.kilkennylibrary.ie
LIBRARY NEWS
POETRY IRELAND Day will be celebrated on Thursday 27th April with Newspaper blackout Poetry Workshops for local primary school children. Apparently, a blackout poem is when a poet takes a black marker to an already established piece of text, i.e newspaper, magazine etc., and starts redacting words until a new poem is formed. The local schools have already been circulated about the project..
VINNY MORRISSEY TOURNAMENT
Plans are being finalised, at present,for the 24th running of the annual Vincent Morrissey inter club hurling U-16 tournament. The tournament, in memory of the late Vincent Morrissey, an All-Ireland Feile winner with the club in 1989 is scheduled to take place on Saturday, 20th May. Details of participating teams and the draws will follow in the next short while.
TEA DAY
On Thursday, 4th May the Alzheimers Society will be holding their annual Tea Day fundraiser starting at 10 a.m., in Loughboy Library. Later in the day, at 12.30p.m., Ruth Maher, of the Alzheimers Society will give a short presentation entitled, "living with Alzheimers". Support for the event would be much appreciated.
MUSIC
We welcome Uptown Band back tio the stage for Saturday night's entertainment.
LOTTO
Tuesday night's draw produced the following combination 13 :14 : 31. there was no winning ticket. next week's jackpot increases to Eu 1,200. The consolation winners were Carmel Savage, Sadie McKane, Theresa Hennessy, Paul Drennan and Aine White.

Home Rule Club
Saturday nights have evolved into great nights of entertainment in the John's Quay club with super music, big crowds and a fantastic atmosphere. Seamus Nugent and son play there next Saturday night and this duo are great favourites with the Home Rule Club supporters. The upstairs function room is in good demand with Swing Dancing on Tuesday nights, Line Dancing on Thursday mornings and Tai Chi and Set Dancing on Thursday evenings every week.
The Pool and Snooker tables are always busy and if Darts is your game, you’ll find someone to challenge you too. Watch for the First Friday Sessions and Moira’s Open nights that are so popular. The occasional concerts we put on are also proving very popular and successful.
The Annual General Meeting of the club is scheduled for April 26th at 8:30 and members are encouraged to attend please, thereby ensuring that this old Kilkenny social club continues to thrive, as it is doing at the moment. Members are also reminded that, by allowing their names to go forward for election onto the club committee, they can ensure this continued upsurge. If you have good ideas, good management skills etc. and succeed in being elected on the management committee for the coming year, it can bring a great sense of achievement to anyone prepared to help the last Home Rule Club in Ireland. Once again patrons are reminded that one does not have to be a member.