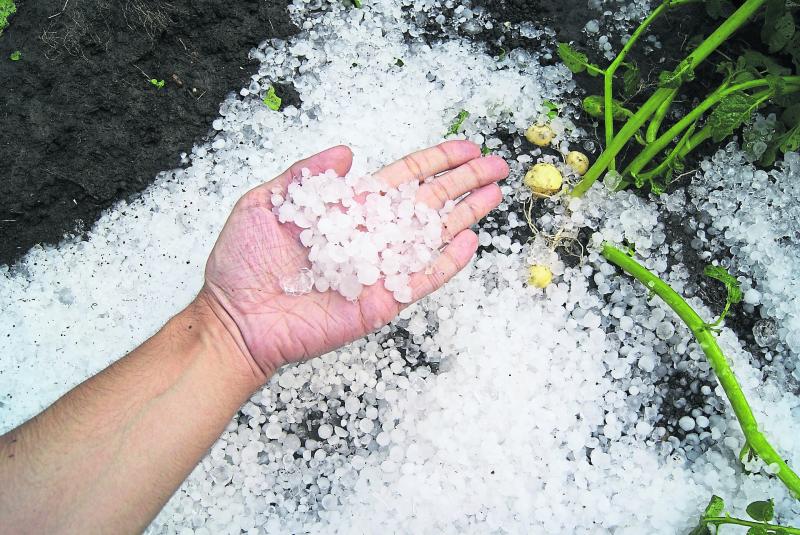 The shock we feel, when hit by hailstones or a flurry of snow never fails to amuse, but cold is necessary to get some crops going, writes Shirley Lanigan

We finally got our winter and for some reason it took us by surprise. It always does.

Very often, December and January are mild, and when followed by a cold February, we get a terrible shock.

The shock and put-uponness we feel, when hit by a handful of hailstones and a flurry of snow in winter never fails to amuse.

But cold is necessary. Some crops need a bit of cold to get them going – Broad beans and garlic both need the temperature to drop before they can germinate.

So if you planted garlic before Christmas, it has now had its blast of chill and is probably well underway.

Plant broad bean quickly before the cold disappears and be ready for a crop in early summer.

Right now I am dreaming of those little jade green gems next June. I do not care how slow they are to shell. They are the most delicious summer taste I can think of, so there will be three packets instead of the usual one in this garden.

While the weather is cold, the jobs that need doing begin to hot up now.

This is a good time to lift and divide those plants that have bulked up.

If you planted hostas a few years ago, the clump might be big enough to lift and split. The tell-tale is a mass of new shoots and above- ground bits of root, pushing and shoving each other in an effort to get space to grow.

If this is the situation, dig up the whole thing, bearing in mind that it might prove hard to dislodge. If so, go around the sides of the mat of growth loosening it up. Then lift it out of the ground and onto a tarpaulin.

Take two forks or spades and insert them back to back and press down. Prise them apart to split the clump, which will probably be as hard as a rock.

Repeat this subdivision with the smaller-clumps, again and again until you end up with a number of little ones, each with two or three visible growth shoots. They can then be distributed around the garden in freshly manured ground.

If you are blessed to already have enough hostas of your own, you could make your friends love you even more by giving them a clump to get them going.

Slugs love hostas and I came across a recent American gardener with a tip which might be worth trying. If you have rosemary in your garden, and in particular a good beefy rosemary bush, this is something that might prove useful:

Cut short branches , about 10 to 20cms or four to eight inches, long and range them in a circle around the newly planted hostas – or indeed whatever newly divided perennials you are replanting. I am thinking of delphiniums, the fresh new shoots of which slugs are particularly fond.

The base for this experiment is that the American gardener found that among the few cuttings she set out that never underwent slug attack, was rosemary.

I would have thought that this was because the pin-like leaves are leathery and tough and not the luscious, juicy sort of leaf that slugs find tastiest. But this gardener wondered if the deterrent might not be the essential oil in the rosemary leaf that kept the slugs away from her cuttings.

So she took the idea on and gathered plenty more cuttings from a mature bush and lay them in circles around her baby lettuces and other seedlings in the vegetable garden.

She found that the slugs did not attack these baby veg. She actually found the rosemary more of a deterrent than eggshells, copper tape, cinders, beech nuts and all the other barrier methods she had been using against slug trouble.

I will try this method with the newly planted hosta clumps – and again later in the spring around the seed beds where baby peas, lettuce and sun flowers, courgette and spinach will need protection. Let the experiment begin!

Meanwhile, back in late February, when dividing and splitting perennials, it is well to remember that not all of these need protection against the slugs.

Asters, campanulas, perennial cornflowers, day lilies, geraniums and astrantia are among the great number that are safe. Their leaves are too coarse and leathery.

Nor do the slithery ones go for hairy, silver leaves like byzantina or lambs ears and lychnis. You could make life easier for yourself by growing more of these.

There is a lot to be said for avoiding and side-stepping the problem rather than bringing it on.

Finally, on the cat-repellant front, a nice scattering of dried up holly leaves make for a grand deterrent to the moggy who wants to turn your newly planted border as a public toilet…