Poet thinks singer Christy Moore should record as a song 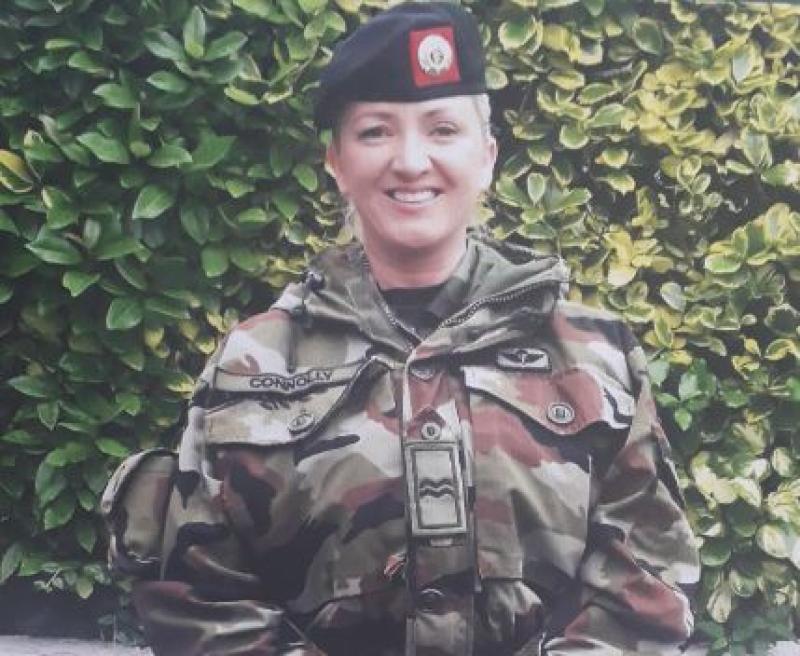 Tracy Connolly in her Army days

Watch Tracy recite her poem: Click here for The Bloods read by the author

A former soldier has written a poem about a Kilkenny-based army battalion.

Tracy Connolly wrote ‘The Bloods’ after the nickname for the 3rd Infantry Battalion which was based in the Curragh but now based in James Stephens Barracks in Kilkenny.

The battalion traces its history back to 1923 when the garrisons of several towns in the north-west of Ireland were ordered to amalgamate and form the 3rd Infantry Battalion.
Tracy, who now works as a healthcare assistant in Cork, took up writing poetry during the Covid-19 restrictions.

Tracy said: “I was inspired to write the poem by an ex member of the Bloods.
“I know the lads would really love to be remembered and recognised for the Trojan battalion they were.
“I think a singer of the calibre of Christy Moore should record the poem as a song because there are a lot of links to Kildare in it.”

Tracy joined the Army in 1994 and underwent intensive training in the Curragh to become a communications expert.
She said: “I loved the Curragh as it was like being in an army movie with so many trucks, jeeps, panhard vehicles and troops running and marching all around the camp.
“It was a complete military family in view everywhere.”

Overseas
Tracy later served on peacekeeping duty in Lebanon and Kosovo which was a challenging environment but she was well trained.
She added: “This lockdown has arisen my true passion for writing.
“I hadn’t time for writing all these years between the army and other jobs.
"I’m now truly loving poetry and my first book is gone for editing.”

It was a garrison of several towns back in 1923

When it was ordered to amalgamate during the great emergency

The southeast was then protected with their soldiers in full sight

For fear of an invasion, one must keep things pretty tight.

The 3rd Infantry Battalion under the 9th brigade rule

Situated in Boyle and Dockery Barracks became the cool

The years following the war of independence were extremely rough

As the Donegal command was scattered about the place

Upon reading the Gazette something did not fit

So around 1929 3rd Battalion finally came to be

Placed in McDonnagh Barracks in the Curragh camp to see

But the switch to the Vickers made the Battalion ignite

A war-like appearance, the Irish Army seemed to show

From running the Curragh plains and shouting out, gung-ho

Producing rifle and revolver teams, being their godsend

From the hurling to the football and boxing at the glow

Was there anything the Bloods didn’t do or didn’t even know?

Little did they predict those officers and those men

That many years on, their duties would not end

For they have seen every corner of Ireland’s greatest map

With the state of world tension back in 1938

That this was the great Battalion simply of our time

In 1946 the Bloods saved farmers’ crops

And were surrounded by people who praised them as top-notch

The colours of red and white reflect where they lay

In 1968, Northern Ireland was troubled with civil rights

So the Bloods raised 3 border battalions loaded up in sight

It’s a memory for sure they never will forget

Knowing their Blood comrades who did their very best.

Once an old Blood said to me ‘Bloods will never die’

And one day it will be our time to reorg