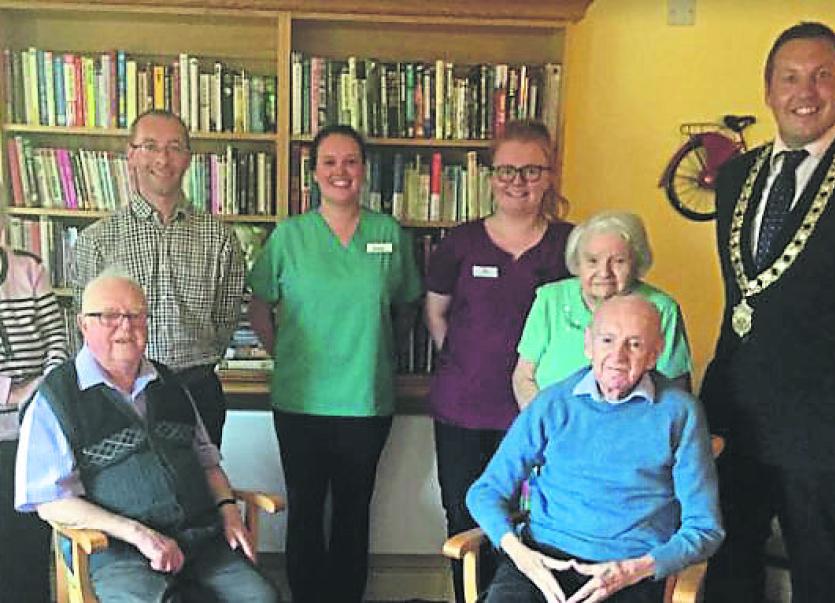 Mayor of Kilkenny, Cllr Peter Cleere enjoyed an afternoon with the residents of Drakelands House Nursing Home recently.
He and last year’s mayor, Cllr Michael Doyle were invited to share their experiences as the city’s first citizen because both are from rural areas of the county and because historically the Mayor has been from the city.
Amid great banter, a number of the residents expressed concern about the many business changes to the High Street.
The overall interest from the forum, which comprised all age groups ranging from staff in their late 20s to residents in their late 90s, was what the role of the mayor encompassed and how these young men managed to successfully fulfil the role while work in their full-time employment and raising their young children?
It was without reservation that both men complimented the role their wives played in maintaining their family life while they fulfilled their role as Mayor.
Both expressed their gratitude to their respective employers who enable them to commit to their role, working flexible hours.
Everyone who attended was bowled over by their enthusiasm and their honesty.
Cllr Michael Doyle told the gathering about his year as Mayor and his express commitment to carers and the pivotal role they play in hospitals, nursing homes and the community.
Peter Cleere
Peter who was elected three months ago spoke about the diversity of the functions of the mayor and how in his unique position, he would meet people from all walks of life and would be in the privileged position to provide mayoral services to a far reaching community.
The residents of Drakelands House were overwhelmed by the sheer goodness of these two young men who had such great respect and admiration for each other and for the role they were elected to fulfil.