This year, the field carries with it the theme of ‘hope’ and that theme couldn’t have been relevant given the events of recent days.

Last Friday, the day before the official opening, Ukrainian youngsters from all across Kilkenny arrived at the field to film a very special music video.

The idea came about following a performance by Ukrainian girl Polina Sidorova (17) at a recent cultural exhibition in MacDonagh Junction.

Cllr Andrew McGuinness, a musician himself, was so impressed by Polina’s performance that he took her to John Travers’ music studio to have the song recorded. 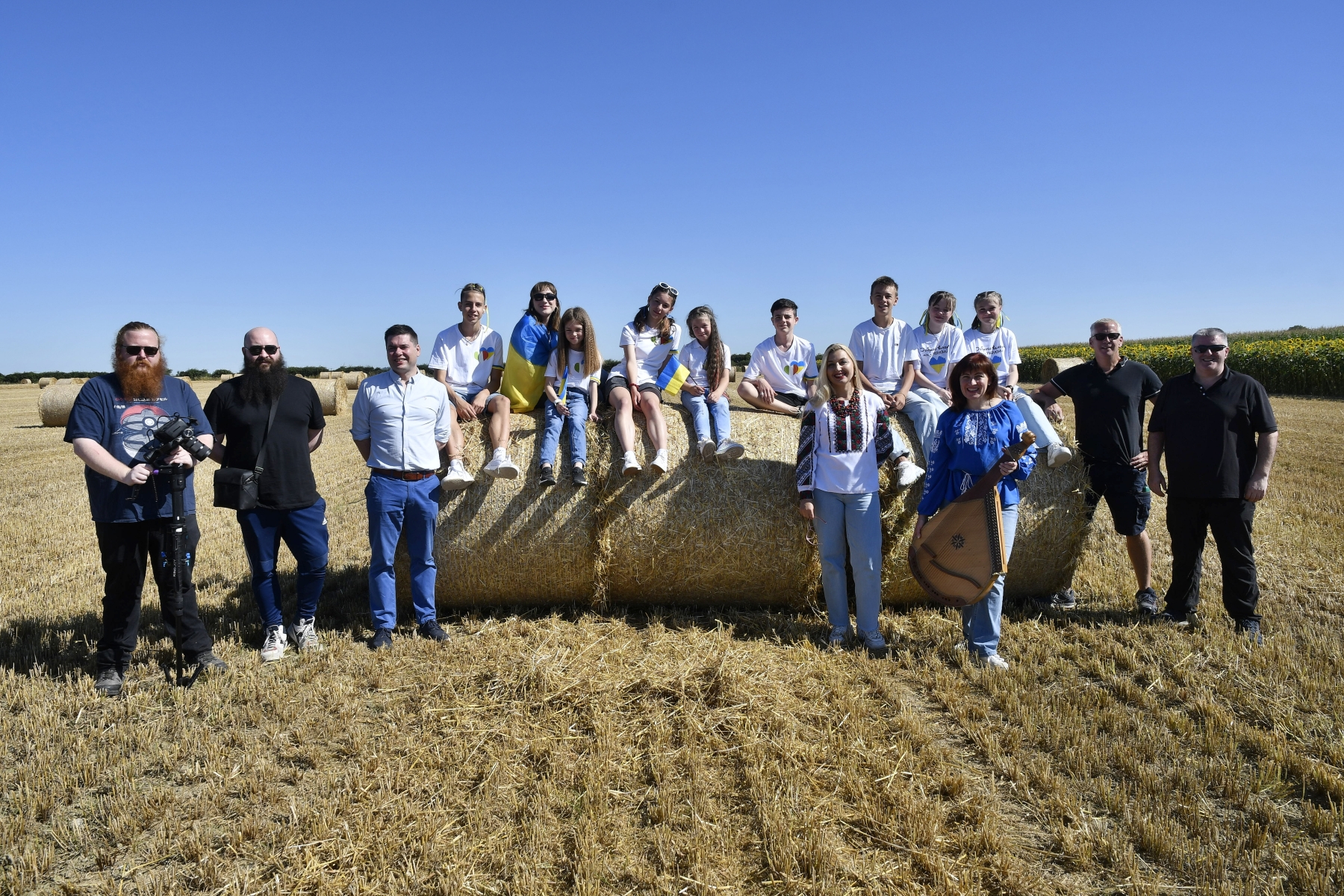 CLICK 'NEXT' ABOVE TO SEE MORE PICS FROM THE VIDEO SHOOT

“The song was written in Ukrainian and we had traditional Ukrainian musicians involved,” he said.

“John Travers gave his time for free and we are all very thankful that he did because the song turned out brilliantly.”

With the song recorded, a plan was then put in place to film a video to accompany it.

Dicemen Productions, a Kilkenny-based creative media and video company, volunteered their time and skills to help film the video.

The venue for the video, Kilkenny Sunflower Field, almost picked itself.

The sunflower is the national flower of Ukraine and has become a significant symbol of solidarity and peace across the world.

It is hard to imagine a Ukrainian village without these flowers.

Kilkenny Taxi Watch founder Derek Devoy, who runs the sunflower field event in aid of Taxi Watch, was more than happy to allow it to be used for filming.

With transport kindly provided by the Kilkenny Community Engagement Unit, youngsters and Ukrainian musicians arrived at the field full of optimism and creative energy.

Polina sang and performed the song with incredible passion and the team from Dicemen Productions pulled out all the stops to make sure the video matched.

Cllr McGuinness described the filming as ‘a great day out for so many young Ukrainian children whose lives have been uprooted by the war’.

“The song is a real anthem of hope and we are hoping to have it released soon to raise funds to support the Ukrainian community,” he added.

Special thanks also went to Svitlana Saseyi who helped organise the event and acted as translator and to makeup artist Carol Knox.

For singer Polina, a new chapter in her life is about to begin.

She left Ireland in the last few days to return to Ukraine where she plans on gathering her belongings before attending college in Slovakia.

The song she produced here in Kilkenny will serve as a message of hope to all the Ukrainian people still unable to return to their homeland.

It will remind them that they will have a home and be welcome here for as long as they need.

Polina has been one of the many shining lights enriching our local community in recent times and we are in a lesser place following her departure.

Kilkenny Sunflower Field remains open to the general public every Saturday and Sunday from 12 noon to 7pm, with the final day being Sunday, August 28.

Taxi Watch teaches professional drivers how to spot the signs of a person suffering through a suicide crisis. Providing that teaching requires funding.

Kilkenny pub named Leinster winner of Pub of the Year

Visitors are asked to make a donation and in return they can bring home as many sunflowers as they wish - don’t forget to bring scissors!

“There is no shortage of sunflowers this year,” said Derek. “We got the weather and great advice on growing them so the field is absolutely full to the brim.”

The field is in Kilbride, Callan (Eircode: R95 PK88) and there is no prior booking needed.