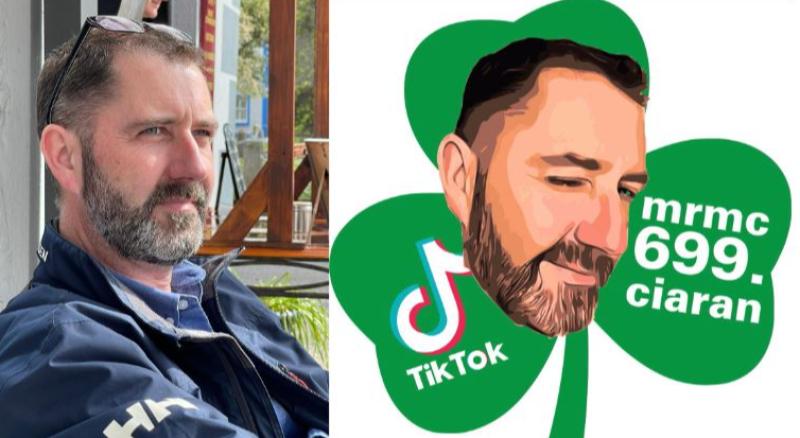 Ciaran from Kilkenny (pictured) has built a huge following on his TikTok account (@mrmc699.ciaran)

Before the pandemic took hold in 2020, TikTok was a social media platform that Kilkenny Dad Ciaran (51) from Kells hadn’t really been paying too much attention to.

It was only through the most boresome days of the lockdown, after seeing other creators on the platform through his sons, that Ciaran decided he had it in him to have a go himself.

“I’ve always enjoyed IT and being creative with technology,” Ciaran told the Kilkenny People.

“I enjoyed the videos that the Fupin Eejits (a Kilkenny-Tipperary comedy group) would make.

“After watching other creators, I made one or two videos myself, copying certain trends and styles that I found funny. The main thing was just to bring a smile to the faces of the people who found my videos.”

Ciaran’s most popular content includes comedy videos where he tells jokes and stories with comedic delivery. He often throws in some visual gags too.

“Most jokes I find on other apps or by googling and sometimes people send me jokes that to use,” said Ciaran.

“At one stage early on I winked in a couple of videos and then, when I didn’t, people asked ‘where was the wink?’. It had kind of become a trademark so I kept it up.

“Also, the Irish accent is a big winner, especially for the Americans.”

Ciaran set up his account less than two years ago but he now has almost 200,000 followers and is continuing to grow as a creator.

“I actually get recognised as ‘the guy from TikTok’ every so often now,” he said.

“Sometimes my videos only get small views and other times they blow up. I have had a couple of videos that have had over five million views.”

Despite all the views, Ciaran does not make any money directly from the platform.

“In certain countries there is a creator fund where you can earn money when your videos get views, however there isn’t any such fund in Ireland. Here creators, for the most part, just do it for the craic.”

Ciaran acknowledged that with positive comes negative and TikTok can also be toxic in certain places, like any social media platform.

Ciaran steers away from such negativity.

“I do my own thing and just keep to making sketches and funny content. While I always aim for comedy, I stay away from controversial topics. The only one I make a fool of is myself.

Ciaran holds true that there is something for everyone on TikTok once you get the hang of it.

“The algorithm is very clever so it will show you content similar to what you’ve previously interacted with,” he explained.

It’s a great feeling to know that people are looking forward to the next video.

“At the end of the day it’s all about the craic and having a bit of fun.”

Want to follow Ciaran? Search ‘@mrmc699.ciaran’ on TikTok to find him!