Terrifying Kilkenny Tales: The Black Death That Decimated The City 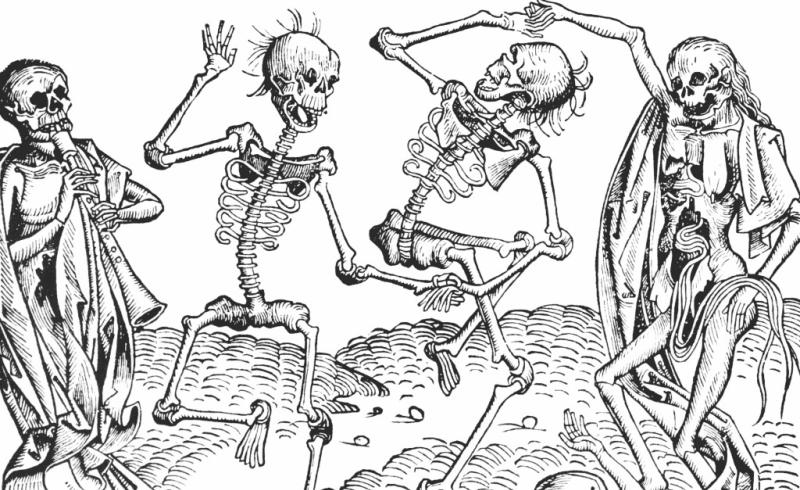 The Dance of Death (1493) by Michael Wolgemut, inspired by The Black Death

"So that notable deeds should not perish with time, and be lost from the memory of future generations, I, seeing these many ills, waiting among the dead for death to come, have committed to writing what I have truly heard and examined, I leave parchment for continuing the work, in case anyone should still be alive in the future and any son of Adam can escape this pestilence and continue the work thus begun." - Friar John Clyn, Kilkenny, 1349.

The Black Death unleashed an unassailable wave of death and destruction across Ireland in the fourteenth century.

It arrived on this island via Dublin in July of 1348 and reached Kilkenny by the year’s end.

Read also: Kilkenny named 'one of the most haunted places in Europe'

We know all of this thanks to the eyewitness account of Kilkenny Friar John Clyn, whose writings serve as the primary national testament of The Black Death.

Friar Clyn was a Franciscan monk and The Black Death took a huge toll on his vocation, a vocation that advocated a life of relative poverty, mercy and empathy.

He makes a note of this in 1348: "from very fear and horror, men were seldom brave enough to perform the works of piety and mercy, such as visiting the sick and burying the dead."

Why were these men so afraid? Well because, as Clyn writes:

"Whosoever touched the sick or the dead was immediately infected and died thereafter."

Friar Clyn documented the tragic scale of the devastation in the city with unrivalled detail. It is hard to contemplate the sheer scale of life lost:

"There was hardly a house in which one only had died, but as a rule man and wife with their children and all the family went the common way of death."

He informs us that this fatal disease was at its most devastating point between December 1348 and March 1349, and that it had killed eight Dominican friars in one day alone.

Clyn's writings stop after March 1349, and this is likely because he too had succumbed to the very disease he had been documenting.

The Black Death had a particularly devastating toll on the Anglo-Irish upper classes in Kilkenny.

Middle Age urban centres were usually congested and in Kilkenny, like many other Irish settlements, it was mainly the Anglo-Irish that were cramped inside city walls where the disease could spread rapidly.

Friar Clyn was a guardian of St. Francis’ Abbey at the time, the remains of which are still visible at the brewery site today.

He straddled the periphery of two ways of life in Kilkenny during the period - the way of the native Irish, the inhabitants of Irishtown (named after the fact), and the way of the Anglo-Irish, who lived inside the city walls.

Friar Clyn, the native Irish and the Anglo-Irish of Kilkenny may have lived separate lives, but all felt the unassailable impact of The Black Death.