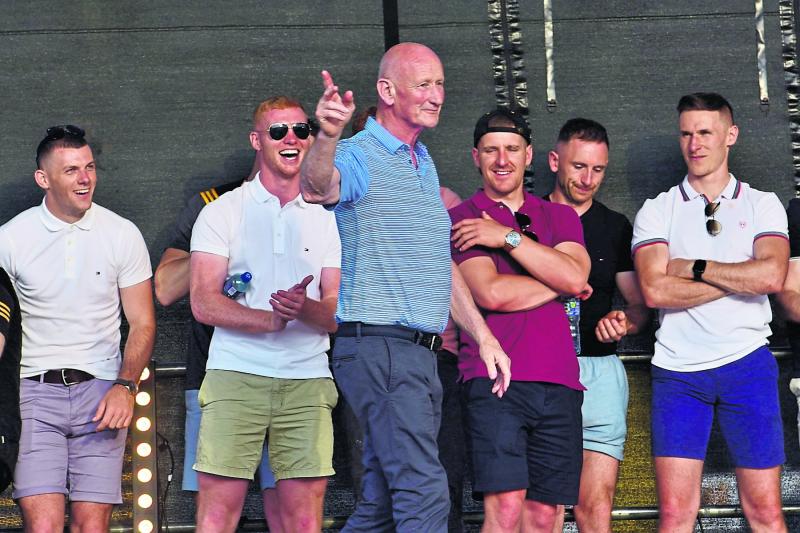 Brian Cody told thousands of fans gathered at the homecoming of the Kilkenny senior hurling team at Nowlan Park that he has ‘never been prouder of a team’ than he was on Sunday in Croke Park.

“For close to half the panel this was their first All-Ireland final,” the Kilkenny senior hurling manager said.

“They fought to the bitter end. They refused to break and refused to lie down.”

The long-serving manager thanked fans for showing up in such great numbers on what was an incredibly balmy evening in Nowlan Park.

GALLERY: Some of the best action pics from the Kilkenny vs Limerick All-Ireland final

“The fact that you’ve come out means an awful lot to these players,” he said.

Cody also congratulated the Kilkenny U-20 hurling team and the Kilkenny junior football team on their All-Ireland successes before making a plea to people across the county to support their clubs.

“The work going on at club level in Kilkenny is so important,” Cody emphasised.

“So back your clubs and get behind them.”

The senior team arrived at the grounds following a city tour aboard an open-top bus, starting at Kilkenny Castle.

Kilkenny supporters lined the streets all the way up to stadium in support.

Kilkenny GAA Chairman Jimmy Walsh was resolute in his speech at the homecoming as he commended the senior team.

“The real story is that Kilkenny haven’t gone away and Kilkenny never will go away,” he said.

“Winning the Liam MacCarthy will happen for this great team soon and in the meantime Kilkenny is still the capital of hurling.”

Walsh also paid tribute to the selectors, physios, strength and conditioning coaches, team doctor, coordinators and everybody behind the scenes.

“No words can do justice to the efforts of these players over the last year. They have helped to rejuvenate life in Kilkenny.”

Both Walsh and Cody took some time to wish the senior camogie team success in their upcoming All-Ireland semi final and those well wishes were met with rapturous applause.