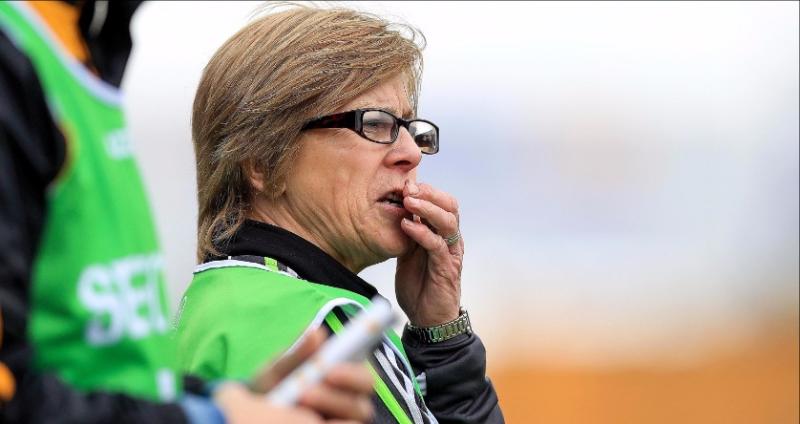 KILKENNY retained their Littlewoods Ireland Camogie League Division 1 title with an all-round team performance that augurs well for the championship.
Just as in the All-Ireland final last September, Cork were unable to work Kilkenny out. Ann Downey and her lieutenants Conor Phelan and Paddy Mullally must get huge credit for the tactics that stifled the previously high-scoring Cork attack, while creating the space that delivered two priceless goals of their own.
The players in black and amber carried out the plan to a tee, especially in the first half, when they won the vast majority of the individual battles around the pitch. And there were battles aplenty, with the physicality of the exchanges notable from start to finish.
Cork did improve in the second half, the introduction of Orla Cotter a welcome boost after the brilliant St Catherine’s stickwoman had missed most of the spring through injury. They began to match Kilkenny’s intensity too but they failed to trouble Emma Kavanagh.
The nearest they got to getting a goal that would certainly have put a different slant on proceedings came in the 48th minute, when Amy Connor fielded Katrina Mackey’s Crossfield delivery, cut inside a Kilkenny defender and unleashed a shot from inside the 13m line.
Out of nowhere however, Catherine Foley arrived to produce a sensational block and the sliotar was cleared.
Even in the first half, when they were a clear second best, they spurned some good chances and dropped too many balls short but they could have few complaints.
Kilkenny often played with just one player inside their opposition 45. That had the dual consequence of cutting out the space in their own end of the field, while backing their ability to have an impact with strike runners from deep.
The set-up got them a goal by the third minute, when Denise Gaule advanced on a delivery by Miriam Walsh and hand-passed over the advancing Aoife Murray.
Gemma O’Connor responded with a point for Cork but Kilkenny had three of the next four points including a brace from Katie Power.
Power and Walsh were flying and such were the Rebels’ defensive difficulties that Paudie Murray substituted three-time All Star Pamela Mackey after just 20 minutes.
O’Connor’s score was Cork’s only one from play in that opening period, as Katrina Mackey converted three frees but Aisling Dunphy, Julie Ann Malone and Gaule all managed points from play and Kilkenny were full value for their 1-6 to 0-4 lead at half time.
The Leesiders were better after the restart and looked much sounder defensively. Meanwhile, Cotter was having a real impact, scoring three points including two from play.
But the key moment arrived in the 41st minute. It was slightly strange as Owen Elliott awarded a free to Kilkenny but Cork believed the decision had gone their way. Gemma O’Connor trotted out to stand over the sliotar but once the official confirmed his call, the alert Gaule ran to the mark and almost on the run, took a quick free to Danielle Morrissey that caught the opposition napping.
O’Connor did get back to actually gather possession but was dispossessed and Walsh powered past the challenges of Rena Buckley and Aoife Murray before hand-passing to the net.
That ensured Kilkenny had vital breathing space and late points from Libby Coppinger and Hannah Looney, the latter a fizzing shot that just cleared the crossbar, came too late.
SCORERS: Kilkenny - D Gaule 1-2 (0-1f); M Walsh 1-0; K Power 0-2; A Dunphy, J A Malone, D Morrissey (f) 0-1 each, Cork - K Mackey 0-4(3fs); O Cotter 0-3(1f); G O’Connor, L Coppinger, H Looney 0-1 each