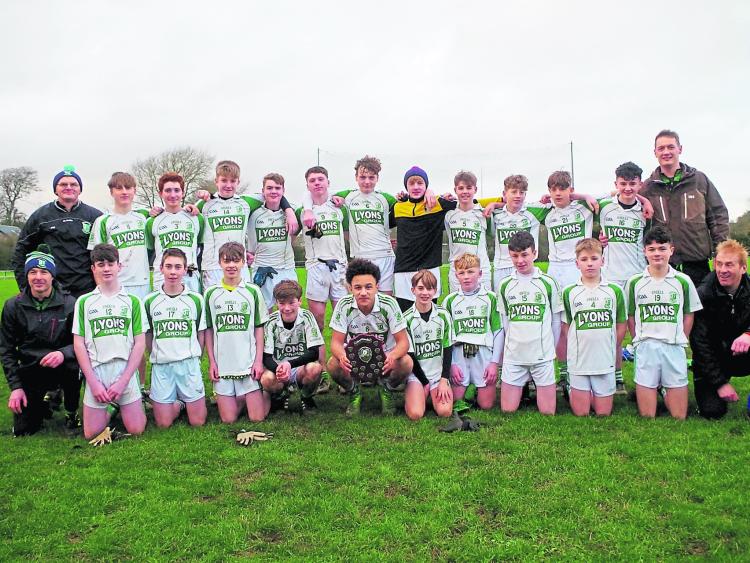 Kilmacow, the Roinn B under-15 football champions

Kilmacow were crowned under-15 Roinn B football champions 2019 following an exciting victory over St Martin’s (Muckalee) in the final.

The winners opened against the stiff breeze and settled well, going two points to the good after five minutes through Ciaran Murray and Josh Maher Mate (free).

St Martin’s applied pressure in the full-forward line, where they had a height advantage. Only the close man marking by Kilmacow’s Donnchadh Williams, who shepherded full-forward Sean Hunt away from the goal when in a good scoring position, stopped Martin’s from registering.

St Martins response was strong. They out-scored the opposition by 1-2 to no score between the 18th and 21st minutes.
The goal came following a quick sideline kick and Cillian Dowling dispatched the ball into the net. The points were picked off by Conor Dooley and Jamie Morrissey.

Resolute defending by Kilmacow stopped Martin’s from adding to their tally.

In the closing five minutes of the half there was a flurry of scores. Josh Maher Mate pointed another close in free before Ciaran Murray got on the end of a Tadgh Connolly pass to level the scores with a fantastic point.

Kilmacow drove on. The hard-working Darragh Kelly powered through. His effort appeared to be going wide but Tom Reddy slotted the ball into the net.

St Martin’s found the net when Cillian Dowling launched a ball towards the square and Tadgh Gill got the vital touch.
Half-time score: Kilmacow 1-5, St Martin’s 2-2.

The losers regained the lead in the new half via a Cillian Dowling point from play. However, Kilmacow began to dominate.
James Walsh and Tadhg Connolly won lots of the aerial battles to stamp some authority on the game. Nick Cass, Calum Regan, Alex Burke Derham, Tom Reddy and Ciaran Murray worked tirelessly up front.

Kilmacow were unable to transfer possession into account, which was largely down to the great defensive work or Martin’s, particularly Ciaran Nolan and Ewan Buggy.

Another Josh Maher Mate free in the 40th minute levelled the scores. A further 12 minutes passed before the same player put Kilmacow ahead from a free.

St Martin’s responded with a Jamie Morrissey point. Lorcan Suffin and Fionn Walsh of Kilmacow were marshalling Conor Dooley and Cormac Quirke well in the half back line, while corner-backs Eden Gillespie and Eoin Murray defended resolutely and with great confidence.

Kilmacow were denied a goal when Jack O’Neill worked himself into a good position following a move involving Ciaran Murray.

Josh Maher Mate completed his master class of free taking when he slotted over his fifth point in the 56th minute to put the South Kilkenny club in front.

St Martin’s had a chance to level, but James Walsh did great work to clear the ball to safety.

At the death, man of the match, James Walsh kicked a sideline ball towards Jack O’Neill, who turned smartly and buried the ball in the net to complete the scoring.