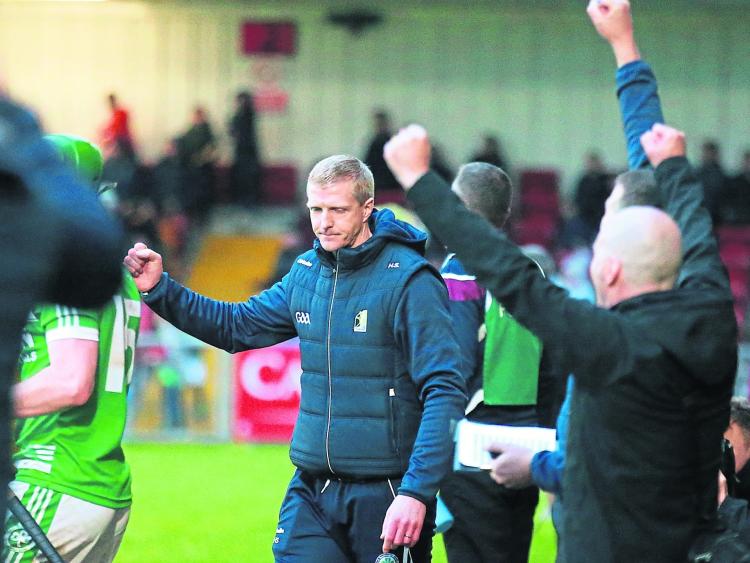 Sunday’s uncompromising ‘give not an inch’ hurling battle with Slaughtneil (Derry) was as good as 10 hard training sessions for Shamrocks of Ballyhale, their delighted manager Henry Shefflin insisted.

The 10 times All-Ireland senior medal winner was thrilled with the display and gritty attitude of his players in what was a physical and good hurling All-Ireland semi-final in Newry.

“The score in a game on January 5 was amazing,” insisted Shefflin after his charges set up a shot at what would be Shamrocks eight All-Ireland title, and first back-to-back successes.

“In the context of the All-Ireland final, that game was as good as 10 training sessions,” Shefflin continued.

“We will go home and look at the video and get to work. We are thrilled to be back in the final.

“For us this was all about trying to get back to Croke Park. Mission accomplished!”

The manager felt all of the Shamrocks players put in an exceptional shift in what was a fast, furious and physical game, but All-Star, Colin Fennelly was the star of the show.

“Without him in the form he was in, we might not have won through,” Henry continued.

“You need people to step up in games like that. TJ (Reid) was well marshalled, so you need someone else to step up.

“Colin was excellent. His speed, strength and size when he got moving was a spectacle in itself.”

And when Brendan Rodgers scored a goal for Slaughtneil to reduce the gap to the minimum with three minutes or normal time remaining, Shefflin admitted he was very concerned.

“We were all very worried,” he insisted.

“We were worried all through. It was that kind of match.

“The efficiency of both teams was off the Richter Scale.

“I think everyone coming here knew a little bit about us. What we saw from Slaughtneil was fantastic. We know they are fit and strong, but it was their hurling that stood out for me. Their performance was absolutely top class.”

“Slaughtneil are a good team with lots of drive and good hurlers,” he suggested.

“We got nothing less than we expected. Maybe others expected less, but not us.

“We would be a bit disappointed with some areas of our game. We were a bit sloppy at times, but we haven’t hurled in seven weeks and we packed Christmas in between.

“Maybe they were distractions. You cannot use those things as excuses.

“Semi-finals are about winning. I wouldn’t care if we won by only one point once we got through. We are in the final, which is the bottom line.”

One wondered what he thought about the physicality of the opposition.

“It wasn’t as apparent where I was, but out around the middle third of the field it was a battle ground,” he replied.

“I would say the bodies are sore now. Neither team stopped going or putting in the tackles. Scores were hard to come by.”

And now, what about the bid for an eighth title?

“We are in the final and we have a chance to do it,” said the former Kilkenny All-Ireland winning captain.

“The club never put two together, so that is in the mix too. Opponents Borris-Ileigh will be itching to win.

“We have to pick ourselves up and get ready to go again. That is the aim. It is great to be there.”

Holden, TJ Reid, Colin Fennelly and the other Shamrocks players involved with Kilkenny have been going virtually non-stop since this time last year, but the hardy full-back made little of the demanding schedule.

“I feel grand,” he said in reply when asked how he felt.

“Tiredness is an easy excuse when you lose or play badly. I wouldn’t say anyone was tired today.

“It has been a long season, but we have managed the load as best we can. If you were doing this year in and year out it would be a different story. We will be ready to go again in the final.”

He insisted the younger players really proved their worth against Slaughtneil, but it was the attitude right through the panel of 31 players that was Shamrocks real strength, he felt.

“Our young players are getting better and better,” Joey felt.

“They all worked really hard. The lads who didn’t get to tog out today have been immense in the background. We need them to continue to drive us on because they are making us all better.”