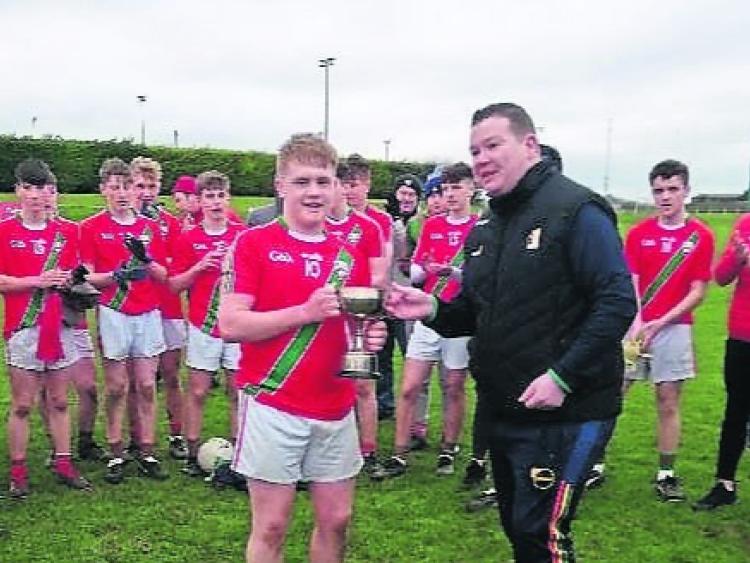 St Martin’s (Muckalee) ended their long drought at minor level that stretched back to 2005 when they won the minor Roinn B football championship final.

Don’t be misguided by the full time score.

Carrickshock gave a really good account of themselves in what was a full-blooded and fiercely contested match that could have swung either way until Martin’s got the upper-hand in the final quarter.

Joe Reid got the men clad in red and green off to the perfect start when he shot a fine goal, burying the ball past the on-rushing ’keeper, Patrick Hickey.

If Martin’s thought things might be easy after that, they were gravely mistaken.

Carrickshock largely bossed the game for much of the first half with dynamic midfield duo, Jack McGuirk and Oisin Doyle driving them on with fair power.

That pair got them into the game with a pair of fine points after some great play by the influential Oisin Carroll.

The losers hit the front in the eight minute when Shane Fennelly sent the green flag waving after some sustained pressure on the Saints goal.

A Kyle Dineen point followed as they continued to drive on into a lead of 1-3 to 1-0. However, they would rue some missed chances to further exert their advantage.

St Martin’s finally got out of their half when Conor Dooley landed a fine point off his left foot.

A goal from Reid brought St Martin’s back, but Eoghan O’Neill got ’Shock level following the resulting kick-out when he scored a splendid finish.

Thomas Lawlor fired over two quick frees before O’Neill responded with a point of his own.

Cathal Keegan gave St Martin’s a huge lift when he sent the green flag waving after Carrickshock had bombarded Ross Dowling’s goal at the other end.

O’Neill left the game in the melting pot at the break with a minor of his own as St Martin’s led by 3-3 to 1-6 at half-way.

The next score was going to be vital.

Thomas Lawlor got the winners off to the best of starts in the new half when he picked off two points, one after a marauding run from half back by Cillian Bryan.

Team captain Jack Farrell drove things on when he pointed for St Martin’s in the 44th minute.

Cathal Keegan’s goal in the 48th minute closed the game out as a contest as St Martin's clicked into a high gear and drove on to victory.

Lawlor got the eventual winners off to the best start of the new half with two points – one after a marauding run from half back Cillian Bryan.