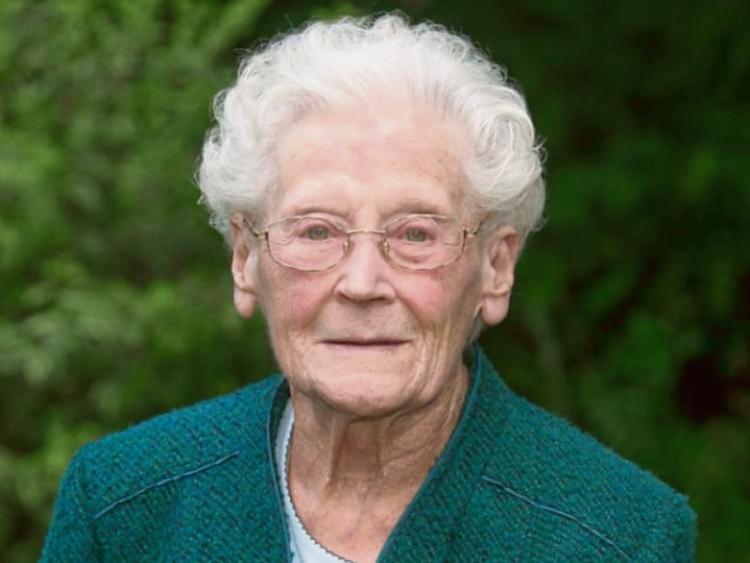 Maureen Hegarty, the matriarchal figure of the Kilkenny Archaeological Society (KAS) and famed teacher at the Loreto Secondary school in the city was laid to rest on Saturday in Foulkstown cemetery after requiem Mass in St Canice's Church.

A formidable woman she was one of the driving forces behind the establishment of Rothe House as the home of the KAS and championed many causes.

She was secretary there for many years and in 1988 was elected president. Maureen was a long time contributor the Old Kilkenny Review, rarely missing a year with articles including two seminal works on Jerpoint; one in 1971 and the second in 2004, entitled, "Jerpoint Abbey: an historical perspective".

Every piece penned by her was well researched and interesting.

She had a fantastic memory right up the time she passed away.

She wrote the history of the Presentation Nuns in Kilkenny and penned the obituaries in the journal for many years.

The following citation was read out by the late Dr John Bradley, of NUI Maynooth, when Maureen received an honorary Masters degree from the university in 2007.

“She has devoted a lifetime of service to the community and particularly in fostering the cultural and intellectual life of the city.”

“Always efficient, and ever tactful, her secretary's reports published annually in the Old Kilkenny Review are a treasure trove of information, while her elegantly written accounts of lectures delivered to the society and published in the Kilkenny People have silently improved both the style and the clarity of many a lecture,” John Bradley said.

She didn't court controversy but didn't shy away from issues when they arose.

The last being her “fierce” opposition to the Central Access Scheme (CAS) and the new bridge over the river.

She had the foresight, back in 2014, to call for an independent evaluation of the county council's scheme.

She has now joined that band of sisters who were the driving force of the KAS in the afterlife. They were Cissie de Loughrey, Mrs Kenealy, Kitty Lanigan and Daisy Phelan. Maureen Hegarty was born on September 1, 1921 to Denis Hegarty and Mary Gleeson in Johnswell, Kilkenny.

The youngest of three children born to the couple she was predeceased by her brother Austin and sister Imelda. Denis was a national schoolteacher from County Kerry who was principal in Johnswell National School.

Mary Gleeson, her mother, belonged to the old Kilkenny family of P.M. Egan who was twice Mayor of Kilkenny City, Borough Treasurer at the time of his death and who published Guides to Kilkenny and Waterford.

Maureen spent her early years in Johnswell attending the school where she was taught by her parents. She went to secondary school in Presentation Convent, Kilkenny, and later studied English and History at U.C.D.

She worked through the war, teaching in Newport, Wales where she made life long friends.

She returned to teach in Presentation Convent, Kilkenny and later in Loreto where she was Asst. Principal until she retired.

Maureen joined the Kilkenny Archaeological Society in 1952 and was elected to the Council in 1957.

A tireless worker she published articles each year in the Old Kilkenny Review. During her tenure as Honorary Secretary of KAS she participated in the official opening of Rothe House on Sunday 17 April 1966.

She facilitated the visit of the group of French pilgrims from Meaux who came to honour St. Fiacre.

She started the annual Youth Heritage Project which had hundreds of local children submit projects from the schools for adjudication, thereby fostering an interest in their local heritage and history.

She wrote the obituaries for the Old Kilkenny Review since the year 2000 when Margaret Phelan, her friend and mentor, died.

She was elected an Honorary member of KAS Council at he AGM of 2014.

She maintained her interest in the Society right through her illness and attended the KAS Christmas Party in the Club House Hotel in December 2014.

On 31 January 2015 she read a piece she had written about the Michael Mac Liammoir visit to Rothe House in 1969.

This was prior to the staging of the new Mac Liammoir play in Kyteler’s Inn which was a fundraising event for the Renaissance Project at Rothe House.

Maureen enjoyed many outings with her friends and was delighted to participate in celebrations especially of her birthday each year.

FOGRA - This article would not have been possible without the help and kindness of Mary Flood.