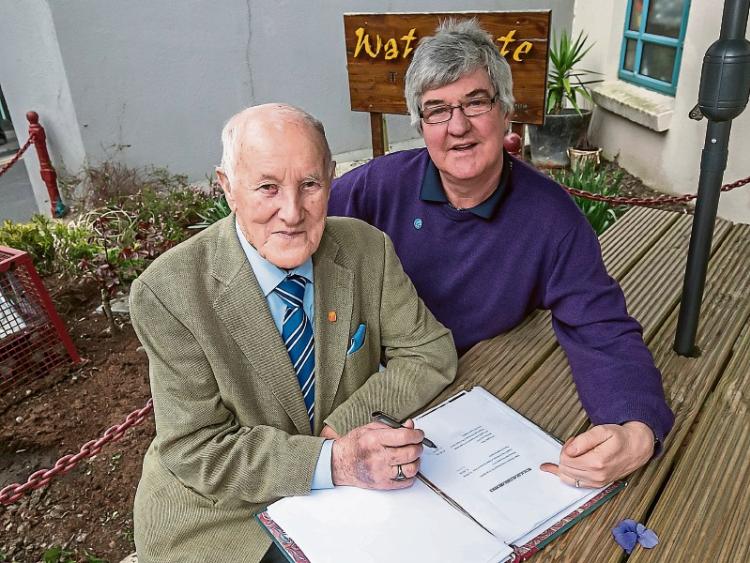 And at 95 years of age, he is fully confident of fulfilling the fixture under the terms of a watertight, exclusive contract negotiated during the week.

Freeman of the city, Pat Shortis has decided to mark the milestone in five years time, with a concert at his beloved theatre.

The oldest Wrenboy in Ireland (on the Wren since 1927), he still goes up to the Archersrath nursing home once a month to play for the old people.

He doesn't consider himself old and whether playing the saxophone, whistling or telling a yarn, he certainly doesn't act his age.

He was deeply touched to be asked to perform on his 100th birthday by Watergate manager, Ger Cody, who he claimed, was nearly as old as himself.

Behind the banter, is the fact that over the years he has raised huge sums of money for many different charities and brought laughter and fun where ever he went.

He has conceded that in his 100th year, he has agreed to play one other event only in 2021 - the annual charity cabaret in Seamus Delaney's pub on Patrick Street, a long standing arrangement going back 70 years.

The man who left school because he could no longer stay in second class as his knees couldn't get under the desk, ended up working in Smithwick's brewery for 50 years and despite never passing a State exam, was supervisor of the highly important brewing department for 40 years.

Asked what is the secret of his good health he said: "Sure I haven't time to be sick and no matter what time I get home, and it could be two in the morning, I would dive into a feed."

He hasn't drank for 28 years "and for good reason," he claimed.

Watergate manager, Ger Cody who negotiated the contract for Mr Shortis's appearance with Pat's daughter, Mary Shortis-Wong said it was a huge coup for the theatre.

"It is a great honour that he picked us and he has appeared on stage here several times," Mr Cody said. Tickets go on sale this morning (Wednesday).

Pat was born in Maudlin Street and has been living in Newpark for over 50 years. His wife and greatest supporter May passed away some years ago and the couple have four children - Sean, Patrick, Mary and Helen and a large number of grandchildren.

Pat Shortis was born in 1921 to Joanie and Jack Shortis in a little thatched house where he grew up with his late brother Con and his sister Daisy. His first job was doing a milk round for Sonny Meehan in Loughboy and at 13 years of age he started working in the Brewery like his father and grandfather before him and worked there until he retired.

Pat is also well known as being one half of The Wetlands Orchestra along with his great friend, Jim Coady, who is some years younger than Pat.

Jim will also be on stage in five years time, once his health improves.

A talented sportsman, Pat captained St John’s Minor team to victory in the hurling championship of 1939.

He was the first ever Grandmaster of the city’s St Patrick’s Day Parade and received a Lifetime Achievement Award at the People of the Year awards.