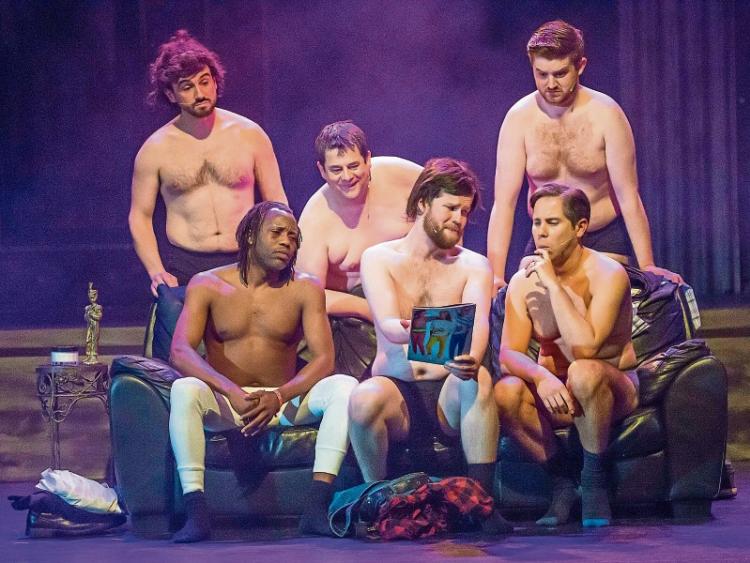 I had no idea what to expect from the current production of The Full Monty, this year’s big production from Kilkenny Musical Society. Like most people, I had seen the 1997 film version, which told the story of a group of unemployed steel workers in Sheffield who form a male striptease act.

The chance to see some of Kilkenny’s finest male specimens going “the full monty” was a chance too good to miss.

For the musical version, the action is moved to the town of Buffalo in upstate New York. Here a group of six unemployed steelworkers decide to form a male striptease group to raise some much needed money. The idea for their act comes from seeing their wives enjoying a Chippendales show. They decide that anything the Chippendales do, they can do better and so decide to go ‘The Full Monty.’

Sarah Brennan, Chairperson of Kilkenny Musical Society, says in her programme notes that the show “was completely different to anything that we have done in the past” and that it certainly is! This is a long way from traditional musicals such as Oklahoma, South Pacific or My Fair Lady. The focus is on the six male performers and their struggle to deal with unemployment and their efforts to deal with their male insecurities ranging from weight issues to their sexuality.

These are the serious underlying issues, but it is all wrapped up in almost three hours of song, dance and great fun.

This is a show that does not rely on one or two big performances, its strong point is the uniformly excellent performances from the 30 plus cast members. They never put a foot or note wrong in what is a technically challenging show, with numerous scene changes on a brilliant set, designed by John O’Donoghue. Credit here to Director, Christine Scarry, who has the team performing as smoothly as Claudio Ranieri’s Leicester City. The energy levels are high from the very start, with Lekan Akinyem, Sarah Brennan and Gary Finegan bringing the audience to their feet in the opening act.

The action hots up in act 2, culminating in the daring final scene. By this stage everyone in the packed Watergate is on their feet, all part of the action and willing the boys on stage to go ‘The Full Monty.’ By the end of the show it has been transformed into an American Chippendale style venue, surely a first for the Watergate!

Special mention for the 10 piece orchestra who drive the action along with an almost jazzy score. As a music fan I could have just sat and listened to the band without any action on the stage. Unlike traditional musicals there are no immediately familiar songs but the musicianship and vocal performances mean this is not an issue. Everyone, from the youngest performer, David Holland, to the more experienced cast members take well deserved bows at the end.

The full Monty is as relevant as when it first appeared on the screen back in 1997. There are serious issues addressed, but, above all this is a fantastic night’s entertainment. Go along and forget about government formations, the housing crisis, Panama papers or any other worries. A few hours in the company of the brilliant Full Monty crew will leave you with a big smile on your face. That’s a guarantee!

The Full Monty continues at The Watergate until Saturday. Don’t miss it!