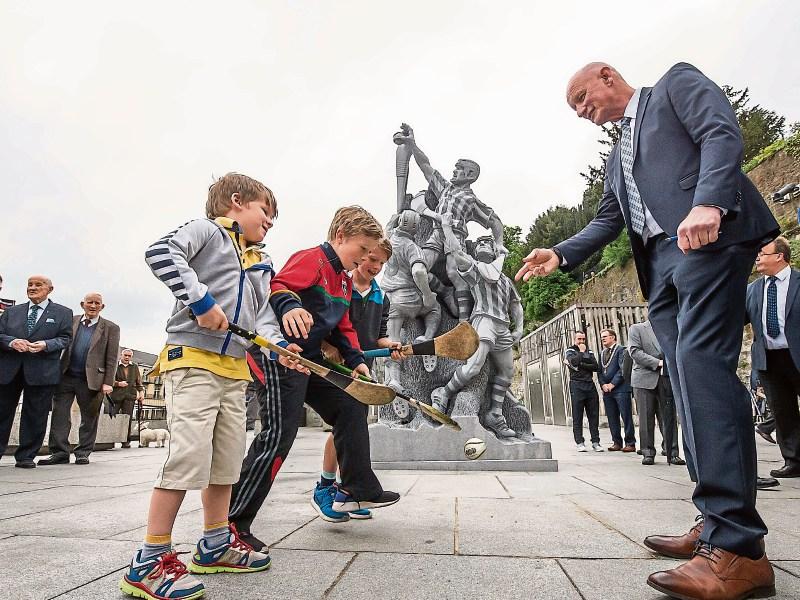 A new hurling statue was unveiled in Kilkenny - dedicated to all those who played the ancient game for the county and the stars of the future yet to come.

The imposing, 10 tonne piece of Paulstown limestone was greeted with universal approval by hundreds of onlookers eager to get a glimpse of what was hidden away for the past five nights.

Situated in the Medieval City by the banks of the Nore on the Canal Walk, the statue depicts hurlers in the fight for possession - two of those from Kilkenny in the famed Black and Amber.

With 36 All-Ireland senior titles won by Kilkenny, the game is very much a fabric of the community.

Key note speaker at the event was team manager Brian Cody, who described the work of sculptor Barry Wrafter from Ennis as “magnificent.”

Mr Cody also referred to the disapointment in Kilkenny at the U-21 result (a two point defeat to Westmeath) but assured all that “It's a stark and timely reminder that you cannot take anything for granted. Last night was a setback, but the players that went out last night and those that went out with the team are the most disappointed of all.”

He added that it's how Kilkenny has reacted to setbacks is what defines Kilkenny as a county.

The statue was unveiled after addresses by the Cathaoirleach of Kilkenny County Council Mary Hilda Cavanagh and Mayor of Kilkenny Joe Malone.

Also present were members of Kilkenny County Board, past and present players, Chief Supt Dominic Hayes, Bishop Seamus Freeman and elected councillors along with management of the local authority.