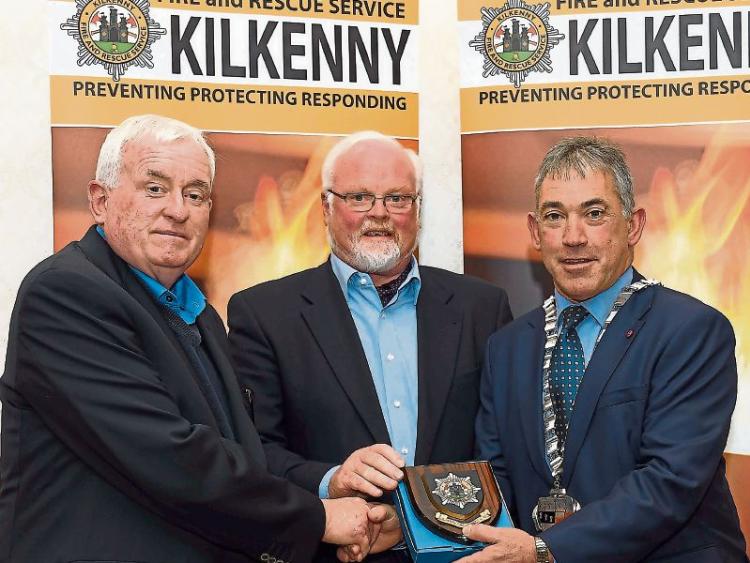 Thomas Purcell was a Kilkenny man by birth, an engineer by profession and a firefighter by vocation.

Born in Kilkenny in 1850 he joined Kilkenny City Volunteer Fire Brigade as a young man and, at the age of 26, he was awarded the silver medal of the Royal Society for the Protection of Life from Fire for his actions at a fire in the city. The citation for the medal states that it was awarded to:

‘Mr.Thomas P.Purcell of High Street Kilkenny in testimony to the intrepid and valuable service rendered by him in the preservation of life at a fire at Messrs Hennesseys,Drapers, Kilkenny at half past one o`clock on the morning of December 19th 1875 when under circumstances of much danger and difficulty rescuing the life of Miss White from imminent death.’

The medal was presented to him at the Guildhall, London in July 1876. Later in his life, while working as an engineer in Limerick he would be involved in saving the life of a workman trapped 95 feet underground when a tunnel collapsed.

Thomas Purcell married Margaret Phelan of Oldtown, Ballyragget in 1880. They had three children, all born while the family lived at St.John`s Quay. Tragedy visited the young family and two of their children died in childhood. Michael died at the age of four in 1887, while Thomas was just one when he died in 1889. The couple`s remaining son Pierce would go on to a long life and a distinguished career in engineering, ending up as Professor of Engineering at UCD.

Purcell`s qualifications as an engineer and his involvement in firefighting would combine in his next venture. Among those who applied for and sat the written examination for the post of Superintendent of the Dublin Fire Brigade when it was advertised in January 1892 was ‘T.Purcell, civil engineer and volunteer fireman’. Purcell sat a written exam and was one of five names shortlisted. He was appointed to the job of Superintendent (Chief Fire Officer) of Dublin Fire Brigade in March 1892 at a salary of £300 per year. He formally took command of the Brigade from the retiring chief, John Boyle, on 14 April of that year.

Purcell took command of a fire brigade formed only thirty years earlier. His first test as Chief Officer came in August 1892 when a fire broke out in the huge South City Markets complex, a mixed use building of thirty retail units, living accommodation and which included a bonded warehouse containing 7,000 barrels of whiskey. The fire was dealt with skilfully in spite of the dangers and Purcell and his brigade came in for praise from all quarters.

In the Autumn of 1892 Purcell decided to visit the United States to study firefighting there and included a visit to a chief officers conference in Milwaukee. The visit was untaken at his own expense and the DFB Museum holds a medal given to him as a momento of his visit to the conference. He also left a diary (held by his family) which records the details of his trip.

Back in Dublin Purcell set about a reorganisation of the DFB. Over the next decade his leadership would come to see significant changes within the Brigade and in the fire safety of Dublin city.

Through those years a series of major fires were faced and dealt with. In the background Purcell laid plans to improve the fire defences of the city. He planned a group of four fire stations to divide the city into quarters with a modern station in each and saw this achieved at Buckingham Street, Dorset Street, Thomas Street and the new brigade headquarters at Tara Street. In response to the new electric tram system in Dublin and the opening of the Loopline railway bridge in the 1890s,both of which restricted the use of the Brigades old Street Escape ladders he would design a turntable ladder for Dublin that he was allowed to patent and which was popular in many UK brigades. It was one of the first effective turntable ladders in use.

In 1898, following a visit to Belfast where he saw the Belfast Fire Brigade horse-drawn ambulance at work, Purcell designed an ambulance for Dublin and introduced the same service here.

Thomas Purcell had a huge interest in advances in the fire service internationally and visited fire brigades in the UK and in Europe.

In 1901 he purchased the first Bader-Vajen smoke helmet to go into use in Europe (it was an American invention).The Bader-Vajen was the first breathing apparatus used in the DFB and was worn by Purcell himself on 13 May 1901 at a fire in Green Street where four children perished.

The fire was the scene of incredible bravery by members of the Brigade. One fireman, Thomas Dunphy, climbed the escape ladder to rescue two children from the burning building under conditions of heavy fire. Purcell seeing the danger, ordered that a hose be played on the fireman, who was badly burned in the rescue. Using the smoke helmet Purcell entered the burning building and assisted in the rescue of a number of other children.

In 1909 Purcell foresaw the need for motorisation of the DFB to bring it into line with developments in technology elsewhere. He designed a new fire engine for Dublin and with his trademark attention to detail he designed all aspects of the new vehicle which he had built by the Leyland Motor Company of Lancashire. The new motor fire engine was delivered on 16 December 1909.Purcell commissioned a second motor fire engine for the opening of Thomas Street fire station in January 1913 .

The years leading up to the First World War were busy in Dublin on all fronts with political and social upheavals.

After the British declaration of war on Germany on 4 August 1914 Dublin Corporation introduced regulations to allow employees to join the British forces. Jobs would be held open, employees continued on half pay and military service would count as Corporation service for pension purposes. In spite of these inducements only two DFB members joined the British military out of the 189 Dublin Corporation employees who did so. The main consequence of the war for the DFB was the additional workload for the ambulances in helping to unload British hospital ships in Dublin port and the increase in the cost of living and cost of services due to wartime inflation.

Purcell and the Dublin Fire Brigade would face their biggest test in April 1916. On 24 April a Rebellion broke out in Dublin. Units of the Irish Volunteers and the Irish Citizen Army mobilised and held positions in Dublin city centre and elsewhere and declared a Republic. Throughout the week of fighting which was to follow much of central Dublin was destroyed. Purcell directed the brigade throughout and after the declaration of Martial Law on 25 April he had to watch from the tower of Tara Street Fire Station as the city burned in what he called ‘the Great Fire’. As soon as possible after the ceasefire and surrender on 29 April he mobilised his resources, including small groups of firefighters from the Guinness Brewery Fire Brigade and the Powers Whiskey Distillery Fire Brigade and set to work.

The Brigade saved Jervis Street Hospital from destruction and contained the major fires burning in the city. In recognition of his work Purcell was awarded the Bronze Medal of the British Fire Prevention Committee. He was also awarded a cash bonus of £50 by Dublin Corporation as recognition of his work. The Corporation also noted that his annual salary at this time was £500.

In the aftermath of the fire Purcell was involved with the commission set up to adjudicate on compensation and sought compensation both for fire brigade property lost but also for a premises in Abbey Street in which he had a commercial interest.

On 16 November 1916 Thomas Purcell was badly injured when thrown from his horse -drawn buggy while on the way to a fire in Suffolk Street. The carriage had not been properly hitched and in trying to bring the horse under control Purcell, then 66 years old, threw himself on to the horses back but fell to the side and was injured. His injuries put him in hospital and off work until January 1917.Purcell was not well during 1917 and in October he decided to retire. He retired in November 1917. He had built Dublin Fire Brigade into an efficient and well trained Brigade which had proven itself in action time and time again.

Thomas Purcell would retire to Dalkey where he lived until 1943. In his later years he travelled widely and wrote a small book on a cure for Sciatica which he had discovered on his trips to Germany with his son. He led a full life and left a proud legacy. His contribution to Dublin Fire Brigade was immense. He is an unsung hero. He is remembered in the DFB 1916 Exhibition in Dublin City Hall and in July of this centenary year of the Rising the Dublin Fire Brigade Chief Officer Pat Fleming, Chief Officer of Kilkenny Fire and Rescue Service, John Collins and the Cathaoirleach of Dun Laoghaire Rathdown Council, Cormac Devlin, placed wreaths on his grave in Deansgrange in a dignified ceremony. Many members of the extended Purcell family attended as did representatives of the fire service, serving and retired. Thomas Purcell lies in Deansgrange Cemetary under a headstone built to his own design. In memory of his native place his imposing headstone is made from Kilkenny limestone.