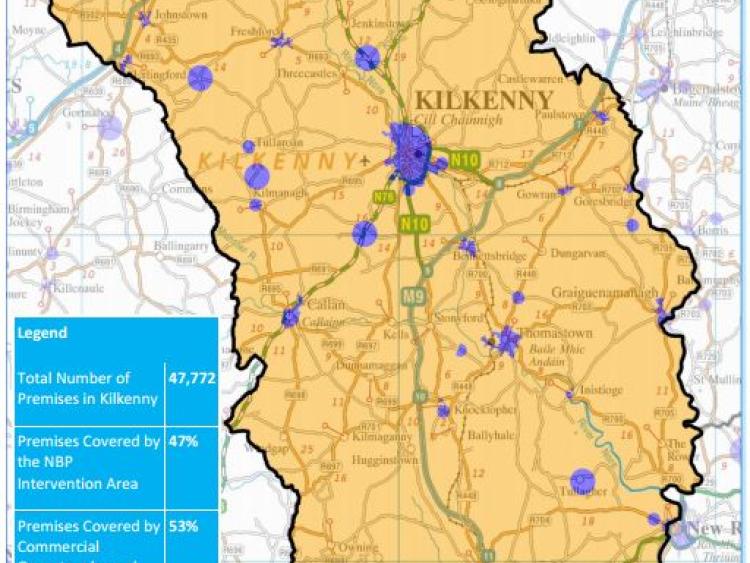 Kilkenny County Council is to appoint a 'broadband officer' to be the point of contact for broadband issues in the Kilkenny, and work with the appointed contractor for the rollout of rural broadband.

At the November council meeting, director of services Tim Butler said it was Government policy to ultimately provide everyone in the country with broadband.

“In larger areas, it is commercially viable, but not as much in smaller areas, so the State must step in, “ he said.

“It will be done via a procurement process.”

Mr Butler explained that there is a dialogue ongoing with three shortlisted bidders, and the tender is expected to be awarded in late 2017. Local authorities will have to provide for the infrastructure – ducts, road openings, and inform the contractor about areas of significance  to be protected.

Amber areas  are those included in the tender process. People who are included in the blue area but do not have access to 30mb broadband,  need to inform the Department or they will miss out .

“It will take between three and five years to get broadband to all areas of the country,” said Mr Butler. Councillors welcomed the update - but also expressed some scepticism.

“We are hearing about this for ten years plus,” said Cllr David Kennedy.

“Now we are hearing it is going to be two or three years before it even starts to roll out. I won't be holding my breath.”

Cllr Patrick O' Neill said he hadn't realised how bad broadband was in Kilkenny until recently.

“Kilkenny ranks as one of the worst in the country for broadband speed,” he said.

Cllr O' Neill also said he had been speaking with someone who works for one of the three companies competing for the tender.

Cllr Maurice Shortall welcomed the news that Kilkenny would soon have a broadband officer. He expressed concern that individual connections were going to involve 'severe, hefty costs'. Cllr Mary Hilda Cavanagh said she welcomed the plan, but it was too slow.

“I am also worried about the costs,” she said, expressing a fear that north Kilkenny was being left behind.

“I think we should create a big row about this. If were lie down, we will miss out. We can create a row and demand more.” 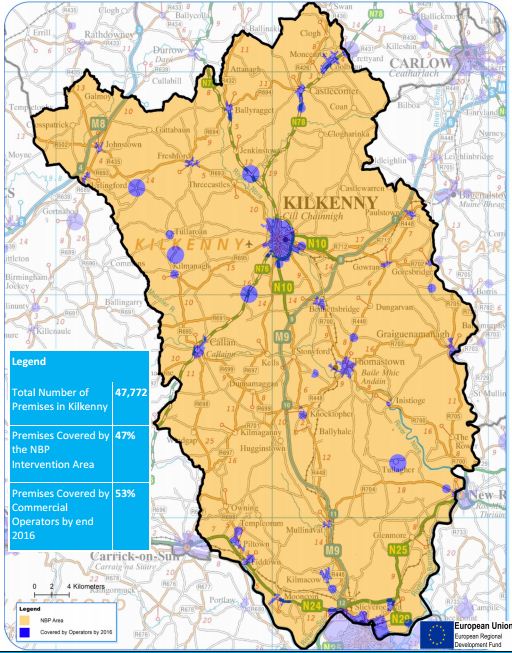 How to ensure you will have access to high-speed broadband

If your house or business is in an AMBER area, you are already included in the tender process. If is in a BLUE area and you do not have access to high speed broadband, please follow the steps outlined below:

1. Check if your premises is located in an amber or blue area by either entering your Eircode, entering your address in the search box or zooming in on the map.

If your premise is in a BLUE area:

Where commercial plans have been rolled out and it is established High Speed Broadband is not available to your premise, nor will it be available from any other operator on a commercial basis, your premise will be included in the AMBER area (intervention area).

Details on the National Broadband Plan can be found at www.broadband.gov.ie.