Castlecomer CS: 'Comer group ask which is better - the chicken or the incubator? 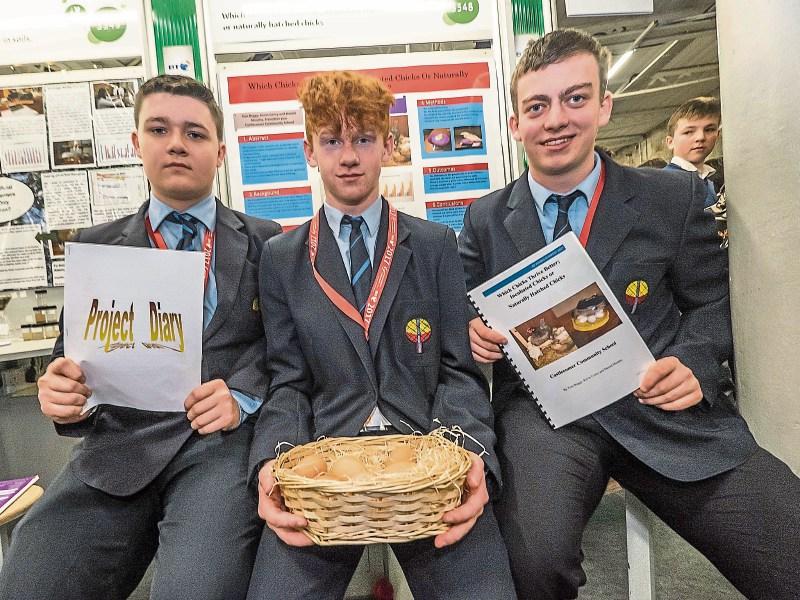 Daniel, Kevin and Tom asking the impossible question at the BT Young Scientist

That's the question that three Transition Year students from Castlecomer Community School set out to answer when they decided to enter, and then qualified for, the BT Young Scientist and Technology Exhibition in the RDS last week.

Daniel Murphy, Kevin Conroy and Tom Buggy's experiment consisted of measuring the growth rates of chicks hatched from 14 eggs — seven in an incubator and seven under a hen.

They then monitored and compared the growth of both sets of chicks, in an attempt to determine which have a faster growth rate. The incubated eggs were measured every day, while the naturally reared eggs were slightly more difficult to get to due to over-protective mother hens.

The students' results were then displayed at a stand in the RDS last week.

Remarkably, the students found that there was little to no difference in the growth rates at all.

“They didn't find any major difference,” teacher Fiona Morrissey told the Kilkenny People last week, reckoning that they were a little bit surprised by the outcome.

“They have all the averages, and it was minimal.”

The students would like to thank Ms. Morrissey for all her ongoing help and expertise throughout the experiment, and she had high praise for them also.

“It was hard work, and they worked all over Christmas,” she said.

“Now they are up here, and they're having a ball.”