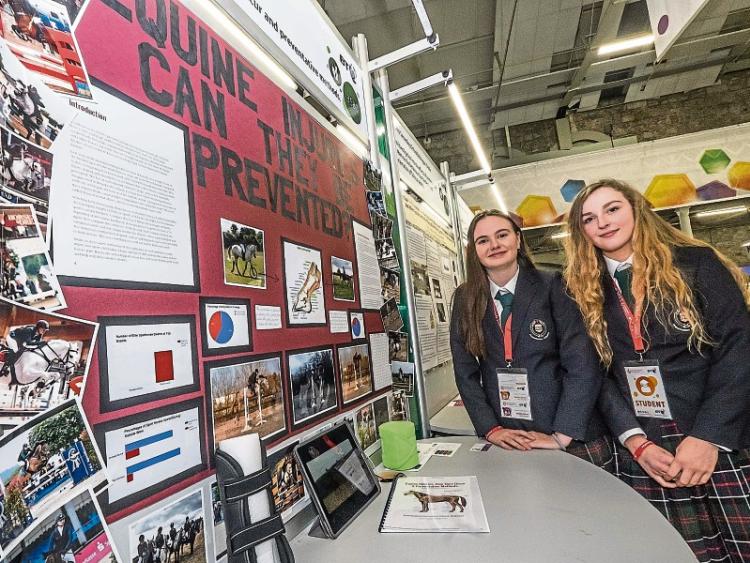 Presentation students Jessica Lennon and Kayleigh Soden wowed the judges with their project 'Equine Injuries, How they occur and Preventative Methods.'

The pupils studied both racehorses and showjumpers and found that the most common injuries that occur during work as well as existing protective and preventative methods such as tendon boots.

“We had been shocked to hear of the sheer number of racehorse deaths due to work-related injuries, 46 horses have been euthanised in the Grand National Festival alone since 2000.

“We both have a background in showjumping and thought it would be interesting to do our project on something that we have a huge interest in,” said Jessica Lannon.

The students outlined how the project mainly consisted of reading scientific journals on the most common, career-ending injuries and the anatomy of the horse, speaking to veterinarians and veterinary students and then backing up these claims with slow motion video analysis of the horse in action, the areas in which most stress was apparent.

“Once we had identified the separate injuries in showjumping horses (damaged deep digital flexor tendon) and racehorses (condylar fracture in the cannon bone), we began to research existing preventative methods by watching past showjumping competitions and races and noting the protective boots each horse was wearing. Almost all showjumping horses wore carbon fibre tendon boots, these boots have an open front which allows air circulation, they contain ventilation panels which makes them breathable and elastic ties for a custom fit to each individual horse.

“Surprisingly, over half of the racehorses we observed were not wearing any protective leg gear even though horse racing, out of all equestrian disciplines, has the highest animal mortality rate. We spoke to a racing trainer and inquired why all of the horses don't tend to wear boots, we were told that the extra weight of the boots would compromise on speed, this led us to think of a solution.”

For a boot to be effective, it must be protective, breathable and secure in order to prevent injury, additionally, boots must be waterproof as if the material were to soak up the horses sweat and water it could easily double in weight which would slow down the horse.

We researched different materials that might be suitable for a light weight, shock absorbing boot that wouldn't effect speed. This got us thinking, what if the material that we were searching for was already in use for a humans' benefit. We looked into what insoles for shoes were made of, we found that they were made of a visco-elastic polymer which means the material is used for containing vibrations, is very shock absorbing and is light weight which is crucial.

The boot would be located below the knee joint and above the fetlock joint in order to allow easy movement, light weight and just as shock absorbing and breathable as the popular carbon showjumping boots.

Some of the proposals contained in the presentation