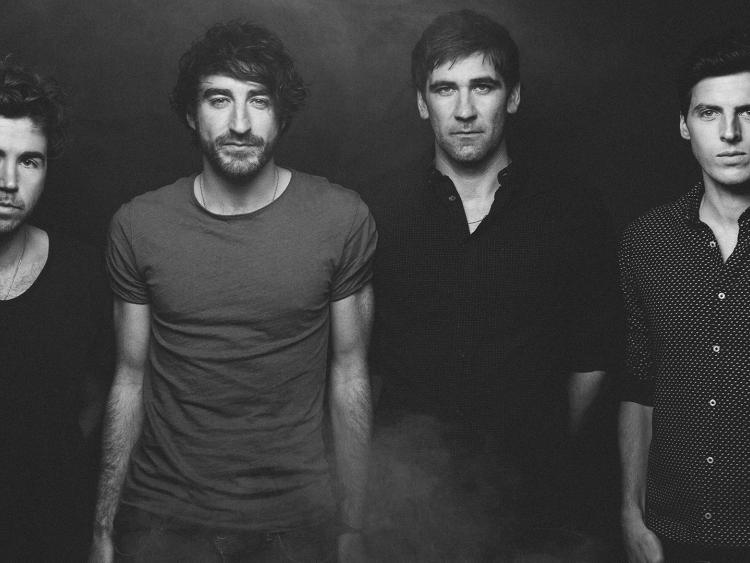 Ahead of their secret show this evening in association with Beat FM, we spoke to The Coronas frontman Danny O'Reilly about their new album, the band and the music industry today.

Q. So the secret location is quite an intimate venue. Why choose Kilkenny for the album launch?

A. Well Beat FM have been great supporters of us over the past few years, so when we were talking to them about the album and promo the idea was just kind of brought up. It felt right to us as well, cause it's been a while since we performed in Kilkenny. Actually one of our first gigs we had outside of Dublin was in Kilkenny, in Cleeres Bar, before Dave had even joined the band.

Q. So explain the album cover to me, it's a bit different from any of your previous ones?

A. Yeah, our good friend Sean Mongey designed it, we really like it. You really have to take pride in your product like it's the main selling point. I love the really cool marble tear comment affect. It looks great both as CD sleeve and vinyl cover.

Q. It's been ten years since "Heroes and Ghosts" does that scare you?

A. Yeah, it's so strange to think it's ten years. You kind of stop and wonder where the years have gone. It's funny though cause we always consider ourselves a new band. But obviously, the Irish music scene has really grown since we started which is great. You know we still love everything about the music scene, the writing, producing and touring it's exciting.

Q. You mentioned the Irish music industry, it really has taken off in the past few years. Out of all the new acts, who would you like to collaborate with?

A.Yeah, it's been really great, well I have to mention my sister Roisín she's always kind of worked with us so it's great to see her doing something. Herself, Hudson Taylor, Gavin James and the rest of them. They're like us in how they started off without the big record label. They grew a steady base of fans, which I think helps most artists.

Q.Speaking of record labels, you guys have started your own one, in the past couple of years. Was it scary or were you relieved all the big business pressure is gone?

A. Yeah, well if anything we put more pressure on ourselves now, but it was the perfect time for us. We had just left the record company over England, cause it didn't really work out for us. But setting up our own record label just felt right and hopefully, it will work out and maybe over the next couple of years it will expand and we could even sign other bands, you know this could even outlive The Coronas. You never know what will happen. We're really enjoying it so far.

Q. You have quite a few gigs lined up over the Summer such as , Sea Sessions and the Marquee Cork. Do you prefer the festival scene or the more intimate one to one gigs?

A. The festivals are always nerve-wracking, there's no sound check and such uncertainty with the crowds. It's really just going out on the whim but we've had some of our most memorable gigs at festivals. We played at Electric Picnic a couple of years back and we were only announced the week before, we were quite nervous whether we would get a crowd, but in the end, we had over 40,000 people at the set which was insane. But with the more personal gigs, we get to perfect everything and practice the entire day. Our upcoming gig at Kilmainham Jail is going to be our biggest gig to date so we are really looking forward to that.

Q. Talk to me about your music videos as of late, they're very different. Like "Just like that" from your last album which features Henry the Hoover, which a personal favourite of mine.

A. Hahaha yeah, they're a bit different. We aren't really the brains behind the videos but we have a really good team behind us, you just have to trust them. The last one we have done for "Real Feel", we kind of came up the idea but it actually became something good, because of our director. We just kind of showed up in the day and at the end really liked how it played so yeah. We've had more creative freedom since creating the label so the videos are more to our style.

Q. Getting back to the album, what is your favourite song, or can you pick one?

A. Ohh well I don't really have one single one, it changes the whole time. But currently, it's "A Bit " I think it really represents the album. I've been trying really hard to be more in the moment and not be caught up on my phone and have real conversations. But yeah the song is really cool to play live so that's the current favourite.

Q.I don't want to end on a negative note but with the recent tragedy in Manchester, do you think it will affect the music industry and live shows?

A. You can never really know, you just have to trust your management team and security, we just played a gig in London at the weekend and we had a minute silence for those who had been affected and then after that, there was a minute of noise and applause which was great. You have to spread the joy of music and not constantly worry or let these thing affect you. Music helps people deal with things, we can't really let anyone take that away.

The Coronas brand new album "Trust The Wire" is available from Friday, June 2 from Itunes and their own website www.thecoronas.net