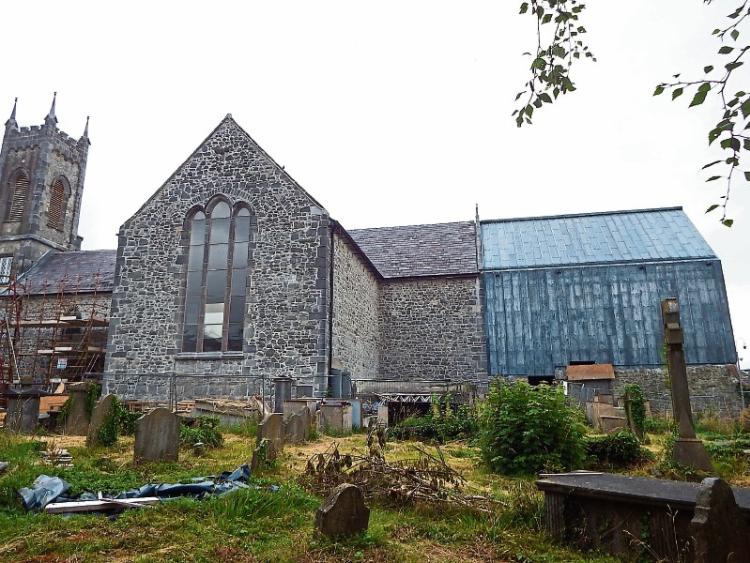 2016: The graveyard at St Mary's Church taken last year as work was still taking place on the site.

The graveyard around the new Medieval Mile Museum at St Mary’s Church remains open and free to the public, despite a barrier which has been put in place in recent weeks.

At a recent meeting of the Kilkenny City Municipal District, Cllr Malcolm Noonan noted that a railing had been put in place at the base of the new Kilkenny Room, preventing full access.

Under the lease agreement betweenKilkenny County Council and Kilkenny Civic Trust, the Trust is responsible for the museum, with the yard still in the stewardship of the council.

Cllr Noonan noted that the late John Bradley had described the graveyard as one of the most important 17th Century graveyards in Ireland or the UK. He called on the council to engage with Kilkenny Civic Trust to ensure that the entire graveyard remains open and with free access. His Notice of Motion was seconded by Cllr Sean Tyrrell.

Director of Services Tim Butler has confirmed that members of the public can still access the graveyard without having to pay, but they would need to call to reception and inform the guides. Prior to the museum project, there were also security issues on the historic churchyard site.

Speaking to the Kilkenny People, Cllr Noonan welcomed assurances over access but said a ‘locked gate’ was still a deterrent to many people. He said the graveyard should be fully restored, and then sensitively landscaped to create a ‘pocket park’.

“I think that there is a fantastic opportunity here to make this graveyard a little wildlife haven in the heart of the city, where local people and visitors can sit and relax, have lunch perhaps but just to enjoy this really special place,” he said.

The Green Party councillor said he looked forward to a positive response from KIlkenny Civic Trust. Notwithstanding height and access restrictions, he said he felt a good compromise could be reached.