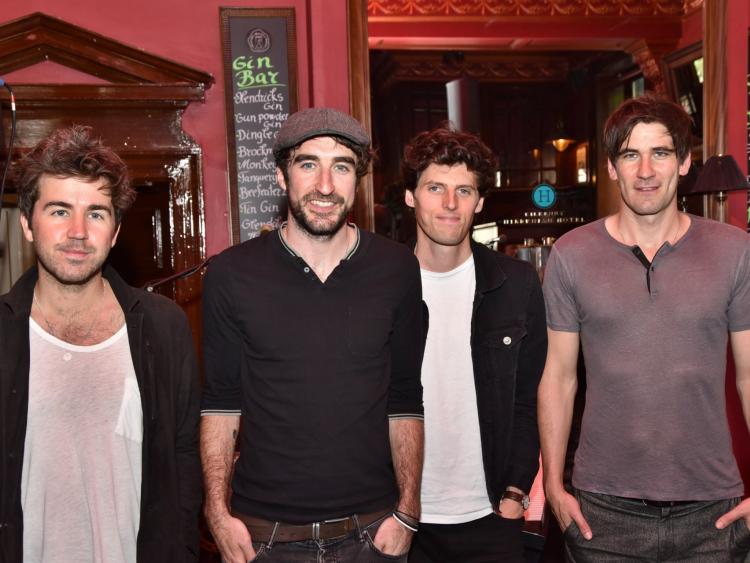 Irish band The Coronas took to the stage last night (Tuesday) for a very intimate and exclusive performance of tracks from their new album "Trust The Wire" at Kilkenny's Hibernian Hotel in association with Beat FM.

A small crowd of just fifty people poured into the front bar of the hotel and waited with anticipation as Beat FM host Rob O'Connor introduced the band. First up was the third track from their new album "A Bit Withdrawn" where frontman Danny O'Reilly told the audience that the song was about him trying to stop spending so much time on his phone. The song's conclusion was met with a rapturous round of applause from the crowd.

Danny O'Reilly then jokingly introduced the band "for those of you who may not know, we're The Coronas". Danny went on to tell the crowd that they were delighted to be back in Kilkenny. "Our very first gig outside of Dublin was in Kilkenny in Cleere's Bar, it was so long ago I don't even think Dave was with us" to which Dave the guitarist and supporting vocals of the band clarified that he was in fact there and remembers "the cool little bar"

The calming piano keys then began for "Gut Feeling" the fourth track from the album that turns into the crowd foot tap song as the prominent beat builds to the chorus. They then continued on to "Real Feel" the latest release from the album which has an excellently directed one take music video.

Beat FM's Rob O'Connor then returned to the stage for a quick round of questions "leaving cert style questions like, what's Pythagoras's theorem?" the question was met by laughter from the audience and worried faces from the band.

"You've been together for ten years, how do you guys still put up with one another" frontman Danny said that "people are surprised that we're actually friends outside of the band and hang out with each other outside of practice and gigs, we're like brothers"

"If you have one piece of advice for people who want to make it in the music industry what would it be?" all band members laughed as Danny answered the question with complete honesty "There's a lot of luck involved with it, but once you have supportive family and friends behind you, it helps a lot. One piece of advice we were told as a band and that has always stayed with us is you can be the best singer in the world but still not make it. So we always try and help up and coming artists. Another thing is to try and write your own songs. If you can do that, you're already a step ahead"

The band then performed the unreleased "Give Me A Minute" a mellow, piano-centered song, that sings of being honest in a relationship. For the final song, the boys performed a track from their last album "The Long Way" the crowd joined in singing lyrics from "Just Like That" when young Waterford girl and Coronas super fan, 8-year-old, Shaylyn Power was invited on stage to sing with the band. After the final applause, the band met and posed for pictures with the audience before taking off for Dublin.

The new ten track album "Trust The Wire" holds a lot of promise for the double platinum selling band. With many of the songs with the potential to become long-time crowd favourites with catchy beats and lyrics like "Not What You Know" and "Gut Feeling". The album is available on Friday, June 2 on Itunes, www.thecoronas.net  and all good record stores