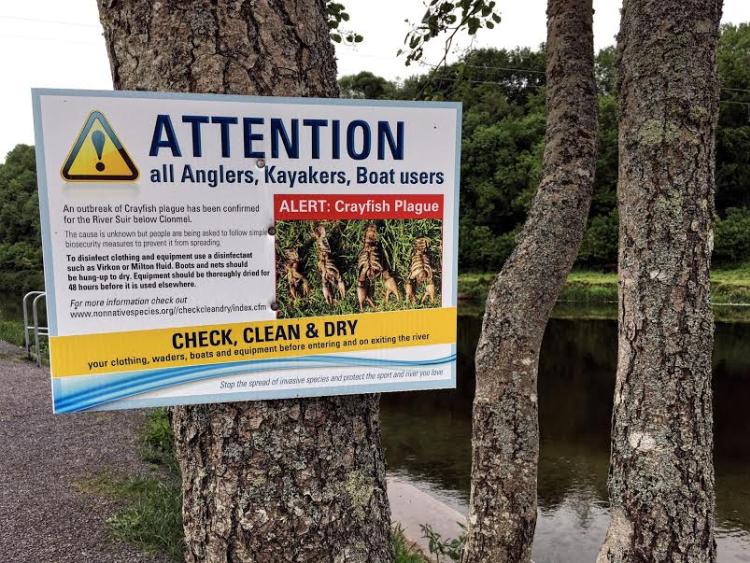 An outbreak of Crayfish Plague on the River Suir is the single greatest threat to Ireland’s native white-clawed Crayfish populations, which are the most significant in Europe.
A meeting of Interagency personnel from the National Parks and Wildlife Service, Inland Fisheries Ireland, along with other experts to discuss the most appropriate response to the outbreak took place this week.
Inland Fisheries Ireland received a report that crayfish were dying in the River Suir earlier this month. Subsequent DNA testing confirmed that the cause is a mould known as the Crayfish Plague. This mould is an invasive pathogen which is associated with non native crayfish species to Ireland and is lethal to our native crayfish, killing 100% on contact.
Experts say that it will kill native crayfish within ten days of contact and spores of the mould can last up to three weeks in water and on damp materials.
A key concern now for the Interagency Group is containment of the disease to the River Suir and to prevent its spread to other catchments that have large populations of crayfish such as the Rivers Nore and Blackwater. There are reports of crayfish die offs in a number of river catchments throughout the country and containment measures are needed immediately to restrict the spread of the disease.
All water users are asked to operate a temporary ban on moving water sports and angling equipment out of the River Suir catchment - commencing immediately.
Water sports and angling equipment currently in use in the Suir catchment may continue to be used there; but boats or angling equipment should not be transferred out of the catchment.For more seewww.watersand communities.ie