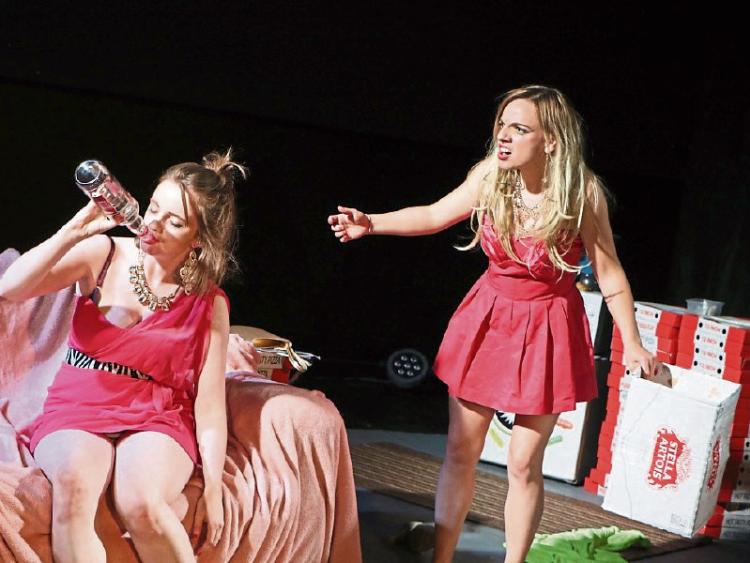 Niamh Moroney has been making brash and bold theatre for over a decade and now she is bringing her latest show to the Edinburgh Fringe Festival where Pulled will do a 26-night run.

The show is an uncompromising new comedy about female sexuality and the social media generation and also stars Andrea Bolger.

Niamh and Andrea are delighted to be in Edinburgh.

“We are very excited, it is a massive platform for us as artists and it is a great opportunity for us.

“The selection process for Edinburgh centred around a road show which was like speed dating with the various venues in Edinburgh - you chat to the people involved in the various venues and then you have to wait and see who calls you. We got three offers and in the end we went with Croile on Georges Street,” said Niamh.

Pulled centres around two characters, Amanda and Michelle , retrace their drink-fuelled steps from the night before through a trail of Twitter, Facebook and selfies, and tackle suchexistential questions as How did I get here? and most importantly Did I pull?

Hungover, emotional and gloriously unapologetic, these two man-eating young wans strut their stuff in front of their imagined social media audience, in a performance that pushes buttons and boundaries, until Michelle finds herself maybe-possibly-probably in need of the morning after pill, and they’re reminded that there’s a price to be paid.

Pulled marks a new collaboration between Central Arts of Waterford, and Devious Theatre, of Kilkenny. Developed as part of Niamh Moroney's residency at Central Arts throughout2016, Pulled is the sequel to to Niamh's solo show Yer Wan, which toured widely to sell out venues in Ireland in 2015 and won Best Solo Show at GalwayFringe Festival. Yer Wan illustrated Amanda's going out routine after a longweek of work. Pulled lets us see what happened next! What madness can a regular Friday night bring? A lot! That's what.

Niamh Moroney has been making theatre for 11 years, having turned to writing in the past five years. She got her teeth into acting during Transition Year when she became a member of Dreamstuff Youth Theatre and Young Irish FilmMakers.

She is also founding member of Devious Theatre, and is also involved in the production of Little Deviations, which runs at Cleeres Theatre from August 3 to 5. Now in their 11th year, Devious are celebrating Pulled as their firstshow to reach outside of Ireland.

Actress, Andrea Bolger is an actress, hailing from Carlow, and living in Dublin. She completed a degree in Drama and Theatre Studies in U.C.C. Cork, where she performed in such plays as ‘Medea’, ‘The Bloody Wedding’ and ‘Fortinasbras gets Drunk’. She continued her training in the Gaiety School of Acting for a year completing a part-time Advanced Performance Course. In 2014/15 she studied in Bow Street, a college exclusive to Screen Acting. She has performed in many plays including two productions in the ' Scene and Heard' festival in Smock Alley, including ' Spots' by Tom Duffy, in February of this year.

She recently appeared in a new play 'Absolute Beginners' by Diane Crofty, for two weeks in the New Theatre in Dublin. In the same month she performed in 'Chatterbox', a collection of short plays in the Teachers