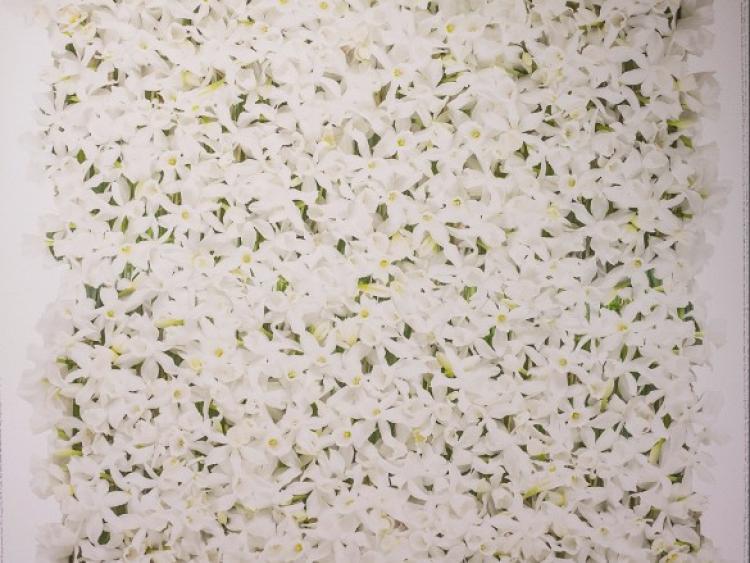 Grennan Mill Craft School, Thomastown is showing a stunning visual tribute to the 796 Tuam Babies. Margaret Doyle Hobbs has in three sensitive works, acknowledged these lost, neglected infants and children. It runs until Saturday.
The first, In Memoriam is a large format, framed image of 796 pure white Narcissi with a border consisting of the names and ages of all the children lovingly hand written. It is archival pigment on Acid free Water colour paper mounted on aluminium.

The second piece is entitled Family Tree. This is a sculptural installation consisting of Contorted Hazel branches representing tree roots hung with individual infant nighties made from Japanese tissue paper. Representing the unknown buried infants.
The last piece, For the Magdalenes, are four beautifully crafted infant nighties titled ‘Maggie 1 to 4’ made in
Japanese tissue paper, hand stitched and embellished.
Margaret felt a strong compulsion to make these works after hearing about the Tuam
Babies scandal. "I could not believe what I was hearing. The disposal of all these little infant bodies
that were seen as nothing in life and less than nothing in death, buried in a disused septic tank in
their shrouds without even the dignity of a coffin prompted me to do something," she said.

"I grew up with memory of a baby who had died and was buried in a grave filled with flowers by the local women to ease the pain of loss for the family," she added

"How differently these mothers and babies were treated by the nuns and their own families in Tuam. I felt so angry as I read the names and ages of these lost children from 1925 to 1960.

"The work is made as a tribute to these children. They received no flowers so I gave each one a white Narcissi, beautiful, pure and fragile as they were, picked from my own garden.Their names are not on any monument to mark their lives or passing so I have acknowledged every one of them creating a border for the flowers. While writing their names and ages I felt at least someone was thinking about and acknowledging them.” These works are equally thought provoking, sensitive and beautiful and deserve a wide audience.
Margaret is also showing a selection of exquisite coloured drawings of collected found objects.
Born in 1952 in New Ross, Margaret lives in Inistioge. She is a graduate of NCAD and works in a variety of media.