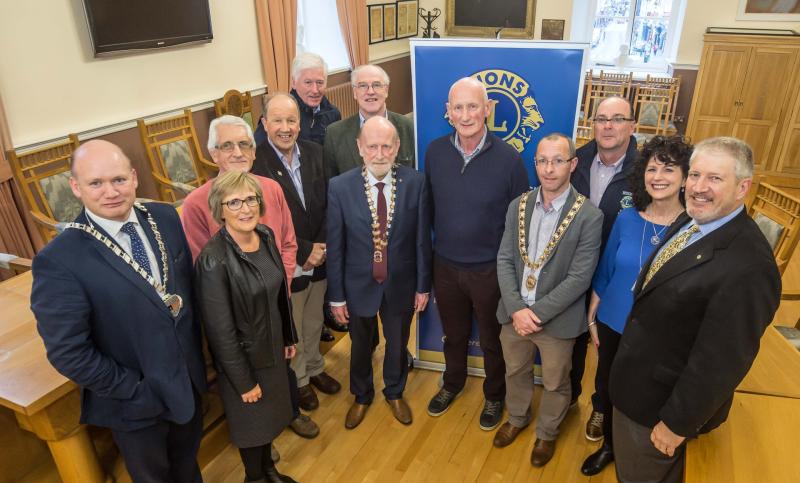 A group of Kiikenny Lions, public representatives and Brian Cody at the launch of the Lions Club ‘Spirit of Christmas Appeal”

Nothing seems to move Brian Cody more than spirit.  The Kilkenny senior hurling manager highlighted that Kilkenny gene, a county-wide generosity of character, at City Hall last week for the launch of the Lions Club, Spirit of Christmas Appeal.
“I am always taken aback by the generosity of Kilkenny people in giving their time to help the less well-off and by the generosity of business people towards the annual appeal by the Kilkenny Lions club,” he said.
“These people typify the spirit of Kilkenny,” he said.
He compared the appeal, to the way the sporting fraternity of Kilkenny continually come together to get things done for the betterment of others.
He said he was delighted to lend his name to the appeal now in its 25th year.
He urged businesses and shops to give generously to the appeal.
Mayor of Kilkenny, Cllr Michael Doyle added his support and said there was a huge burden on many families that couldn't afford Christmas.
Chairman of Kilkenny County Council, Cllr David Fitzgerald highlighted the enormous impact that the appeal had and that over the last 25 years, in excess of €800,000 had been given to the less well-off through the appeal.
MC and Lions Club member, George Candler said that in the 25 years he had been involved he could never remember any business refusing him to make a donation.
Kilkenny Lions Club president, Brian O'Callaghan said that Kilkenny Lions were celebrating their 50th anniversary this year and that as always the motto of the Lions was at the forefront of everything they did; ‘to serve.’
He said that despite being told there was an upturn in the economy, more and more people were seeking the help of the Lions Club.
“We like to give assistance and our annual appeal is our man fundraiser for the year and couldn't happen without the business community.
“We like to give assistance, it's what we do and we will continue to do,” he said.
He thanked the Kilkenny People newspaper for its continued support for over a quarter of a century.
He also praised KCLR96 FM for its valuable contribution and in particular, George Candler for his highly successful farm auction.