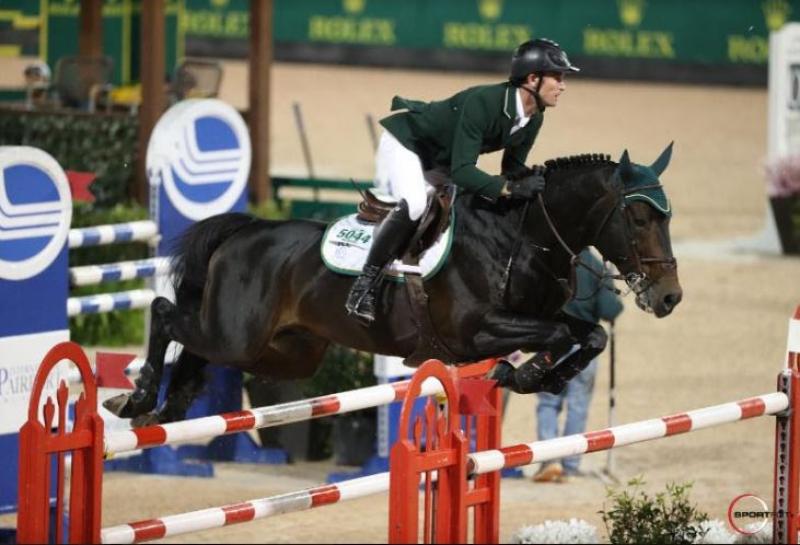 Richie Moloney and the 14-year-old stallion Carrabis Z competing in the in the $380,000 Rolex five-star Grand Prix at Tryon, USA

Kilkenny’s Richie Moloney and the 14-year-old stallion Carrabis Z have taken third place on the podium in the $380,000 Rolex five-star Grand Prix at Tryon, USA in the early hours of Sunday morning.

Moloney from Warrington, just outside the city on the Bennettsbridge road, was one of just three riders who managed to jump clear in the first round of the contest, which was the biggest “Saturday Night Lights” event of the 2017 season at Tryon International Equestrian Center in North Carolina – which is the venue for next year’s much-anticipated World Equestrian Games.

Moloney was drawn last to go in the jump-off and was chasing a target of clear in 34.67 seconds set by American World No.1 Kent Farrington with Gazelle. The Irish rider was clear until the very last fence which unfortunately fell to the floor leaving him in third place with a time of 35.63. Farrington collected the winners prize of $125,000 with Mexico’s Eugenio Garza claiming $76,000 when finishing second with Bariano when a clear in 35.91, while Moloney and Carrabis Z took home $57,000 for their third place finish.

Over 9,000 spectators watched the contest and speaking afterwards, Richie Moloney discussed his round and the advantage of going last in the class:

“It’s always nice to see riders go beforehand, and where most riders did five strides from fence three to four, I did six, and that was my plan from the start. It always helps to go later. In the jump-off, Kent is always very quick, so we tried to catch him, but not today,” Richie said.