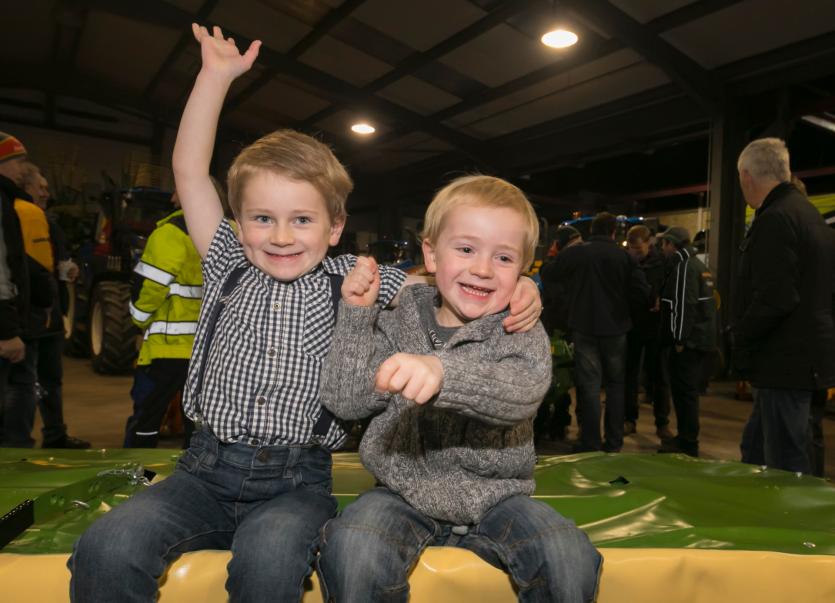 Promoting the upcoming Embrace Farm kids farm safety event at Murphy's Motors, Glenmore, Kilkenny on Thursday are Ryan and Cillian Banville whose dad Kevin died in a farm accident in 2014.

Murphy’s Motors in conjunction with Embrace Farm will host a fun and interactive kids farm safety event on March 29 from 2pm at their premises on the New Ross Road Glenmore supported by Hooper Dolan Insurances and Zurich Insurance.
This follows on from a recent fundraiser in aid of Embrace held at Murphy’s by Dick Murphy which raised €1200.
Embrace Farm work in supporting Irish farming families affected by tragedy on Irish farms.
On March 29 children are invited to attend a fun afternoon where they will have an opportunity to meet Alma from Agrikids who will engage the children in workshops, storytelling and computer games all focused around farm safety.
Speaking about the event, Bernadette Murphy of Murphy’s Motors said; “we are very excited to host such an event here at our premises and believe that highlighting farm safety and risks associated with farms can only be of benefit. It is a very serious issue however we will make the afternoon as fun as possible with loads of giveaways and the Easter Bunny might even pay a visit”.
Bernie also expressed her gratitude to Hooper Dolan Insurances and Zurich Insurance in supporting such an event.
This promises to be a very worthwhile afternoon for farming families in the region.
Murphy’s Motors is a family run business established in 1960, at a time when mechanised farming began to take hold in Ireland.
The current Directors, brother and sister team, Richard and Bernadette Murphy, are the third generation of the Murphy family to be involved in the running of one of southeast Ireland’s leading suppliers of agricultural machinery.
Murphy’s Motors holds 21 franchises from some of the largest manufacturers in the world, such as New Holland, Farmhand, Krone,Kane Trailers, Rossmore Engineering, Pro-Dig Attachments, Shelbourne Reynolds, Tanco and Alo-Maskiner.