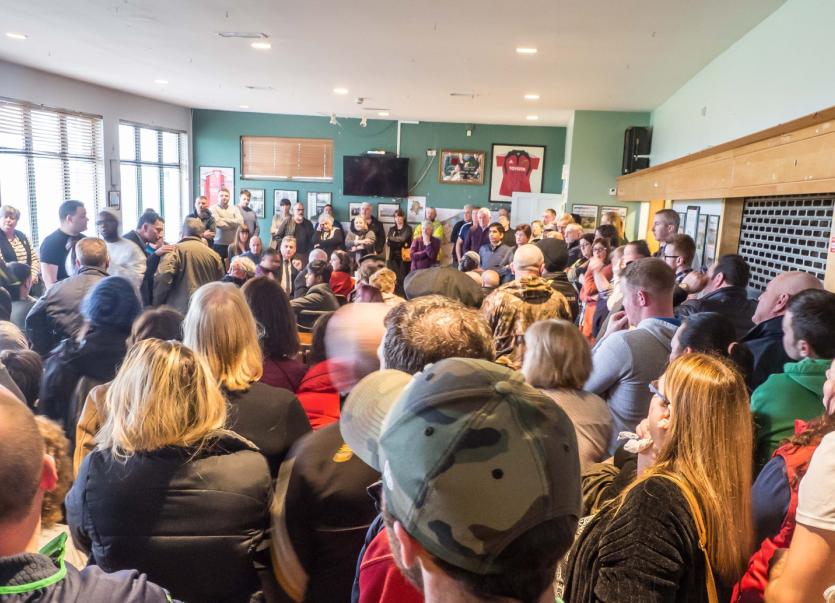 There were heated scenes at a public information meeting on a planned mosque which took place at O'Loughlin Gaels GAA club yesterday evening.

The meeting was requested by public representatives John and Andrew McGuinness in response to queries from local residents.

Approximately 200 people attended the meeting which was organised to provide information on the planning application and the planning process.

Imam Ebrahim Ndure addressed those present and attempted to answer questions from the floor from people, the majority of whom voiced their opposition to the planned development which will cost in the region of €5 million euro.

"We are here to answer your questions and concerns," he said.

Concerns were raised from the floor that the planned site might be close to a burial ground and that the proposed development would have a negative impact on traffic, traffic management and parking in the area.

Local resident Eugene McGuinness, who is opposing the planned mosque said that 99.9% of the people do not want this mosque.

"I have walked to every door in this are, all the housing estates. 99.9% of people do not want this building to go ahead," he said.

The reaction to Mr McGuinness' sentiments from the packed room was fierce applause.

"It is about planning, it is not a religious argument," he said.

Stephanie McDermott from Kells spoke and said she had lived in Muslim countries and that Irish people were allowed to go and worship their faith in other countries.

The Imam said that the Kilkenny Islamic community had been looking for sites for the past two years and asked anyone with an objection to raise it with the county council.

One member of the public said: "We don't agree with the mosque, nobody wants the mosque."

Another person present interjected: 'that is not true'.

"We don't want a mosque. This is not just for the Muslims of Kilkenny. They are going to come from all of Tipperary, Wexford. This is Kilkenny, not Mecca. This is not Mecca. Don't be bringing people down here. Don't build the mosque, we don't want it. You have to respect our culture -  for us to respect you, respect us first," he continued.

A suggestion was also made from the floor to build the mosque on the Freshford Road where the Kilkenny Islamic community have been renting a premises for the past ten years.

The Imam issued an invitation to people to visit the Kilkenny Islamic Centre on the Freshford Road.

Deputy John McGuinness called for calm and explained that if people present wanted to make an objection they could do so. He said that the closing date for objections was April 19 and added that he had heard several objections raised including traffic, traffic management, parking and access for emergency vehicles.

The architect for the planned development was also present to answer any queries, along with a planning expert. The plans for the proposed development which will consist of a mosque, a community hall, a library, residential accommodation, a Halal shop and a community cafe.

On a number of occasions people were asked not to record the contributions that were been made from the floor. People were also asked to refrain from using foul language as there were a number of children present.