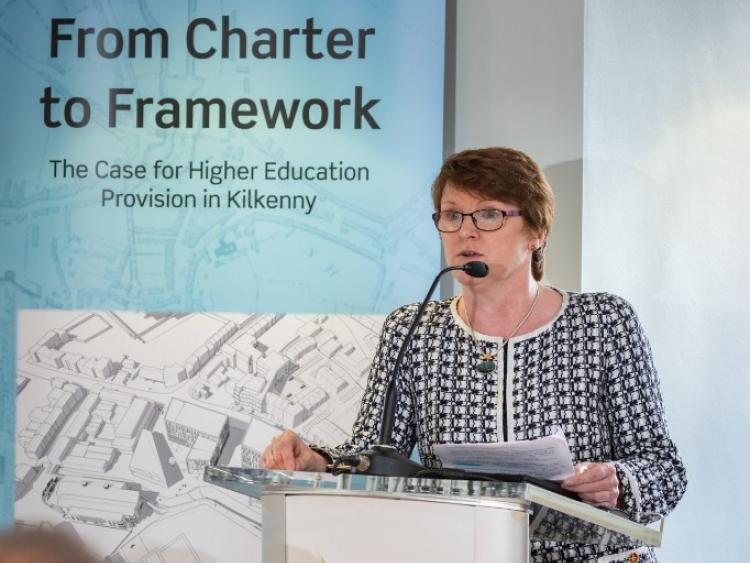 A university campus accommodating 1,000 students is ‘technically feasible’ on the former brewery site, the Abbey Quarter, according to the Chief Executive of Kilkenny County Council.

Colette Byrne was speaking last week at the launch of the report on Third Level provision, which recommends that any Third Level facility developed in Kilkenny should be based on ‘niche areas that reflect the county’s economic activities and strengths’, across disciplines such as design, crafts, animation, heritage, tourism and precision agri-tech.

Ms Byrne said that while the report outlines a number of viable options, the council’s perspective was that the campus should be part of the Technological University of the South East.

“That is our first and preferred option,” she said.

However, said Ms Byrne, should this ‘Plan A’ not find agreement, the council would move quickly to explore the other options.

The council will now formally submit the report to the chairs of both governing bodies of both Institutes of Technology Carlow and Waterford, for their consideration as part of their deliberations in preparing the submission for the TUSE.

The report itself   refers to  the possibility for a ‘synergistic relationship’ between Higher Education provision and the plans for urban renewal of the Abbey Quarter.

“This could enhance the Abbey Quarter by including a vibrant academic community as a key element of the development,” it says.

The report also finds that  the inclusion of Kilkenny in a Technological University would ‘broaden its appeal and its impact in/on the region’, while the provision  of custom-built infrastructure in the Abbey Quarter would offer ‘a substantial asset’.

Cathaoirleach of Kilkenny County Council David Fitzgerald said there now existed an opportunity to take advantage of the decision made in 2012 to take the brewery site into public ownership.

Minister of State Mary Mitchell O’ Connor said she looked forward to going through the report in some detail, and that Technological Universities would be a gamechanger regionally and nationally. She said that she would be delighted to listen to proposals coming forward.