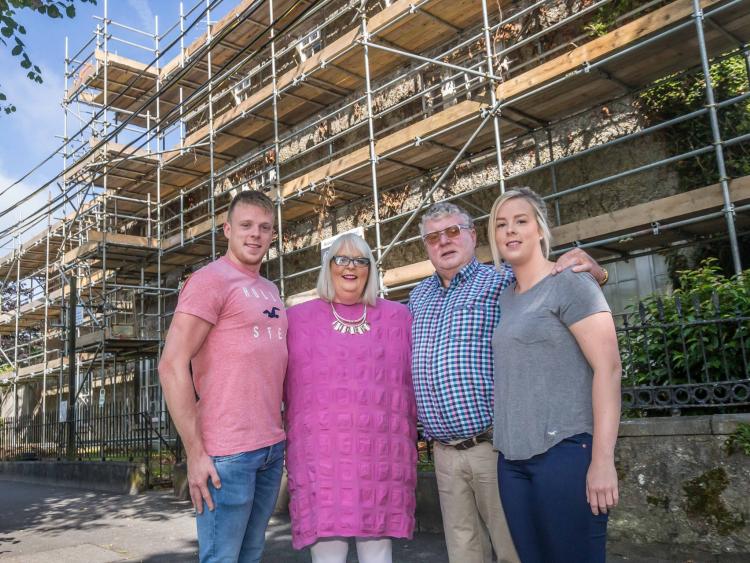 Jimmy, Julie, Joe and Jane Comerford at the Avalon House Hotel in Castlecomer which they are developing PICTURE: PAT MOORE

Kilkenny hotelier Joseph Comerford and two of his sons have launched proceedings against Ulster Bank over a €3 million refinancing payment which they claim they were forced to pay the bank.

Mr Comerford, from Castlecomer, Co Kilkenny and his sons John and Derek, who own and operate the Academy Plaza Hotel on Dublin's O'Connell Street, claim the payment was made after the bank put unreasonable and excessive pressure on them to refinance loans they had with the bank.

They claim that during the recession the Academy Plaza Hotel experienced financial difficulties.

While the business has recovered the claim that in 2012 they claim the bank said the hotel was in a purported default of its financing arrangements.

In a sworn statement Mr Joseph Comerford said the bank saw this as an opportunity to take equity in their business and used it to extract an unreasonable excessive and unconscionable fee for the continuation of the loan agreements.

They claim that through its Global Restructuring Group Ulster Bank had as its objective to extract profits from viable enterprises. This was to benefit both Ulster Bank and the wider business in which it is a member.

The €3 million payment the Comerfords say they were required to pay to refinance the loans was made in December 2014 through an entity of Ulster Bank called UB SIG (ROI).

In 2015 the Comerfords refinanced the indebtedness they had with the bank and terminated their relationship with Ulster Bank.

They seek various orders and declarations including an order that the money is delivered back to them.

They also seek declarations that various agreements between the parties that resulted in the €3 monilli being paid over are void, that the agreements constitute an unconscionable bargain,  and that the two defendants conspired with each other to damage the Comerford's interests.

They further seek damages for alleged economic loss, undue influence, breach of duty, and for duress.

The case came before the High Court's by way of a preliminary ex parte application when the Comerfords sought and were granted permission by Mr Justice Denis McDonald to bring proceedings against UB SIG which is in voluntary liquidation.  The action currently stands adjourned.