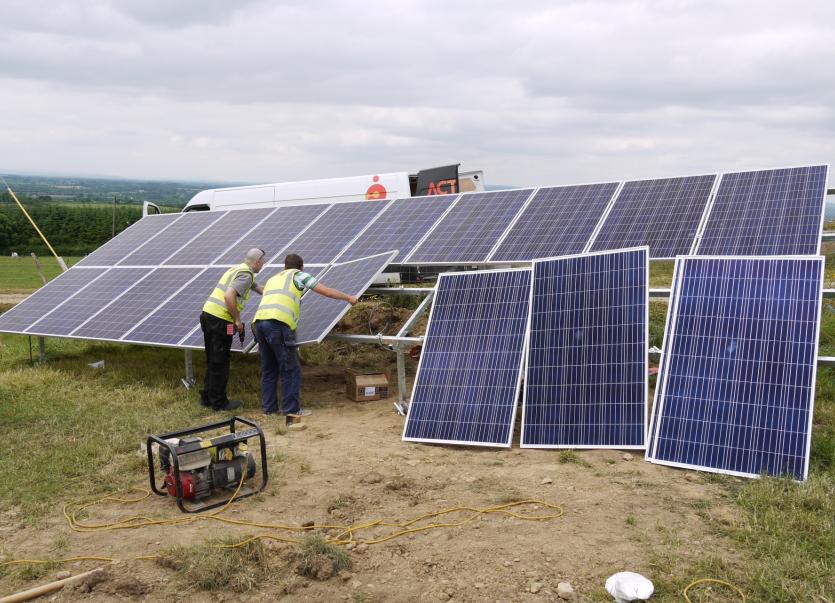 Solar panels being installed on the farm of Cathal Moran at Skeoughvosteen, Kilkenny

A Kilkenny farmer has made his own piece of solar history by having a solar PV system installed on his farm.

Cathal Moran, who farms at Skeoughvosteen will save an average of €1,300 annually - 20% of his electricity bill.

This project brings to a total of five that Elgin Energy is developing in Kilkenny. They have secured planning permission on four other sites; the largest of which is Ballyragget. The project is 25MW in size and once energised can power up to 6,000 homes / 9,500 electric cars annually.

The 10kWp project was installed in a single day and will produce up to 9,000kWh of electricity per annum – that’s enough to power two homes for an entire year.

The project was developed by Elgin Energy in partnership with Activ8 Solar Energies. This is the first time such a project and structure has been installed on an Irish farm.

The structure consists of a simple lightweight steel frame driven into the ground with no concrete being poured. The panels are mounted onto the frame and connect directly to the farm’s fuse board. It is expected to save farmer, Cathal Moran, an average of €1,300 annually - 20% of his electricity bill.

Mr Moran is committed to farming sustainably and was keen to participate in the pilot scheme that provides a straightforward and practical clean energy solution;

“In recent years the margins in farming have grown tighter. Consumers are demanding sustainable practices are adopted – this is being passed through the supply chain and farmers are now trying to identify how they can best meet this demand. Solar is the perfect solution because it is easy to install on the land and it will reduce both my electricity bill and my carbon footprint," Mr Moran said.

Agriculture is the most carbon-intensive industry in Ireland. In 2016, it was the single largest contributor to greenhouse gas emissions representing 32.3% of total emissions. These emissions are set to increase by 5% in 2020 due to increasing animal numbers.

Dairy is crucial to the Irish economy. Since the abolition of EU-regulation milk quotas in 2015, the industry has expanded at an unprecedented rate increasing by a staggering 26% in just two years. Bord Bia reported that Irish dairy exports increased by 19% / €655 million in 2017. Overall, demand is increasing by 1-2% per year, particularly from developing regions such as China, Asia and Africa.

To meet this increased demand and national climate change targets, the Irish dairy industry and its stakeholders must adopt sustainable practices. By introducing clean energy to this industry, the benefits will be two-fold; for individual farmers and Ireland Inc. however, increased Government support is required.

Speaking on the issue, Elgin Energy’s Managing Director, Ronan Kilduff, emphasised the need for government support. “Solar energy can be integrated across every farm in Ireland if the right policies are in place. Planningexemptions for small scale solar installations and the ability to sell excess energy to the grid are crucial in assisting adoption of solar across Irish farms. Farming is the backbone of Ireland and this challenging industry requires support to adopt improved sustainable practices. The solar industry is best placed to provide this support.”

The appetite for rooftop and small scale solar PV has grown rapidly in Ireland over the past decade. With only 6MW energised in Ireland to date compared to 12,000MW in the UK, there is a huge opportunity not just for commercial scale solar farms but also for small scale residential and business installations. Activ8 Solar Energies Managing Director Ciaran Marron says “Solar is fast becoming the cheapest form of energy and will surpass wind energy in Ireland in the coming years. We believe every home, business and farm will want to install solar PV not just because it is environmentally friendly but because it will be the cheapest form of electricity in the very near future.”