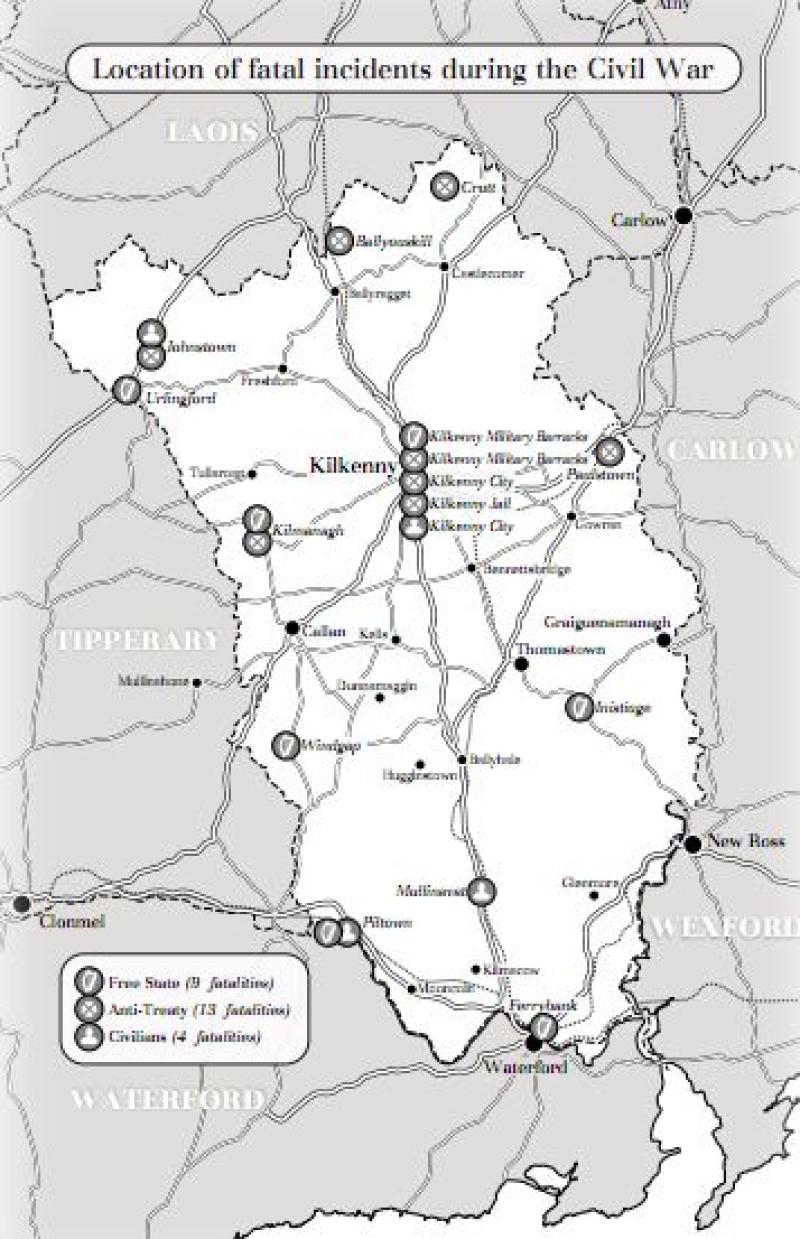 Following on from last weeks article which listed those who died as a result of the War of Independence in County Kilkenny, this week’s article endeavours - for the first time - to record those who died in County Kilkenny during the Civil War conflict (June 1922 – May 1923).
While researching for my new publication, it came as a (grim) surprise to discover that more people died in County Kilkenny during the Civil War (11 months), when compared to the War of Independence (two-and-a-half years). The total number of Civil War fatalities within County Kilkenny was twenty-six. Using the same criteria, the total number of deaths in the county during the War of Independence was twenty (this excludes the two deaths in Mullinahone, County Tipperary).
Differing viewpoints
From the outset, it is important to remark that it is not the aim of this writer to judge anyone’s choices, beliefs or reasoning for taking a particular course of action nearly a century ago.
Thus, I approached recording the dead of the Civil War as objectively as possible, focusing on the people that died and the events that led to their deaths, irrespective of which ‘side’ they were on.
At this juncture, it is helpful to assess the perspectives of the two opposing factions in the Civil War to discern why they took their respective positions. Firstly, to outline generally the pro-Treaty/Free State view; the terms of the Anglo-Irish Treaty (signed
by the Irish and British delegates in December 1921) gave Ireland a measure of freedom unfathomable just a few years previously. This new autonomy included control over defence, domestic and foreign affairs, while in addition, the Crown Forces would evacuate the country and the political prisoners were to be released.
The Treaty also received widespread public support, although the fear of returning to war against the British was a big factor in this. From the anti-Treaty perspective, the Republic they had spent years fighting for had been diluted, while most grievously the Irish people were still to be subjects of a British monarch. Many of those opposed to the Treaty had been IRA combatants or Cumann na mBan women who were at the frontline of the fighting during the War of Independence. They had made many sacrifices regarding their livelihoods, family life and their health, for the cause of the Irish Republic.
Some had also witnessed comrades and family members terrorised. From their vantage point, all they had sacrificed was now diminished.
Recording the Civil War fatalities
Recent digitisation of historic records has made listing the dead of the Civil War possible. Specifically, the digitisation of historic newspapers and the publication of death records from the revolutionary era, has provided a scope unimaginable even a decade ago. Also, since 2014, many of the military service pension’s applications have been made digitally available for the first time which is another boon for historians.
However, it is important to note that there is a possibility of additional unregistered deaths. Although many archives were searched in detail and much time was dedicated to compiling the list, it is conceivable that there were deaths that were not recorded. In other words, there was no death certificate, no military report, no military compensation claim, or no newspaper article documenting the death(s).
Analysis of Kilkenny deaths during the Civil War
Of the twenty-six fatalities in County Kilkenny, thirteen were anti-Treaty IRA (50 per cent), nine were Free State soldiers (35 per cent) and four were civilians (15 per cent). Although the anti-Treaty IRA were the highest grouping killed, the figures do not explain the full story.
Seven of the thirteen anti-Treaty IRA deaths occurred in either Kilkenny Barracks (now James Stephens Barracks) or in Kilkenny Jail (no longer in existence, it was situated at the end of Gaol Road). This included two official executions (John Murphy of Bennettsbridge and John Phelan of Thomastown), while four anti-Treaty deaths were attributed to Free State warders shooting prisoners inside Kilkenny Jail, with the remainder dying from illness.
Hence, Free State soldiers were far more likely to be killed in clashes on the front line against the anti-Treaty IRA than the other way around. Five out of nine Free State deaths occurred in this way. Just four out of the thirteen anti-Treaty IRA deaths occurred on the front line. Of the twenty-six fatalities within County Kilkenny, fourteen were Kilkenny natives, while the
remainder were from the counties of Waterford, Tipperary, Wexford, Laois, Cork and Dublin.
Four civilians were killed during the Civil War in County Kilkenny, the same amount as the War of Independence. The average age of those who died was 24.1 years.
Note; I have included two anti-Treaty prisoners who were fatally shot in Kilkenny Jail in the months after the Civil War officially ended in May 1923. This was because they were technically political prisoners, arrested for their anti-Treaty activities, and shot by the
opposing side.
See listing for full lists of names of those killed in County as a result of the Civil War. Next week’s final article in the series will list the Kilkenny natives who died in other parts of Ireland as a result of the Civil War (Kilkenny, In Times of Revolution, 1900-1923 by Eoin Swithin Walsh is published by Merrion Press on 13 August 2018. It includes more detailed accounts on the circumstances of all persons who died as a result of the conflict).

Samuel Oakes (Anti-Treaty, Waterbarrack, Kilkenny) died on July 30, 1922. Shot dead by Free State soldiers during a search of Dowling’s pub, Blackmill Street, Kilkenny City. He was unarmed. He was sent by his brother, Bill (who was Company Captain), to deliver ammunition to members of a Flying Column.

Patrick Murphy (Free State, Enniscorthy) died on August 2, 1922 at Piltown. Shot dead near Piltown during an attack on an outpost of anti-Treaty IRA troops near Carrick-on-Suir.

Edward Maher (Free State, Gortnahoe) died on August 14 at Urlingford. Died in Urlingford Barracks having been accidently shot by one of his comrades while alighting from a car during a search of a house at nearby Baunmore.

John O’Keeffe (Civilian, Waterford) died on August 15, 1922 at Mulliavat. Killed during an anti-Treaty IRA ambush near Rochestown, Mullinavat, while travelling with a party of Free State soldiers.

John (Sean) J Edwards (Anti Treaty, Waterford) died on August 19, 1922, at Kilkenny Jail. Shot by a Free State sentry in Kilkenny Jail while he was talking to someone on the street outside from a window of the prison.

Frank Byrne (Anti-Treaty, Crettyard, Laois) died on August 21, 1922. Shot accidently by a comrade who was fixing a gun in Crutt, while they were resting on a haystack.

Patrick Griffin (Civilian, Patrick Street, Kilkenny). Died on November 29, 1922 in the city. Accidently knocked down by a Free State Crossley Tender lorry that careered down John’s Street and onto the footpath.

Patrick (Mc)Cormack (Anti Treaty, Grangefertagh, Johnstown). Died on December 2, 1922 at Johnstown. A patrol of Free State soldiers opened fire on a group of anti-Treaty IRA running across Morrissey’s field in Johnstown village. Cormack was shot in the leg and died some hours later.

Patrick Martin (Civilian, Mooncoin) Died on December 16 at Piltown. Shot by Free State soldiers who thought he was trying to fire a revolver at them. He had taken the gun from an anti-Treaty IRA man and wanted to hand it in to the authorities.

Edward Burke (Civilian, Urlingford) Died on December 24, 1922, at Johnstown. Died after being shot by Free State soldiers on Christmas Eve after an altercation broke out between Burke, his friends, and the newly established Civic Guard (Garda Síochána). Free State soldiers were called, one of whom shot Burke outside a pub.

Andrew Power (Anti-Treaty, Ballygunner, Waterford) Died on January 27 1923 in Kilkenny city. Arrested in Waterford in August 1922 because of anti-Treaty IRA activities. Sent to Kilkenny Jail where he contracted diphtheria. Died from the disease having been sent to Kilkenny Central Hospital.

Patrick Barcoe (Anti-Treaty, Neigham Gowran and Annalack Goresbridge) Died on February 2, 1923 at Paulstown. A member of Martin Medlar's east Kilkenny anti-Treaty column, Barcoe was shot dead in an altercation with Free State forces near Shankill. He was covering the retreat of his column when he was fatally wounded.

Thomas Mealey (Anti-Treaty, Coolbawn, Castlecomer) Died on March 10, 1923, in Ballyragget. Part of an anti-Treaty IRA group who attempted to raid the home of the Buggy family. The family shot at the intruders, killing Mealey.

John Walsh (Anti-Treaty, Kilmacthomas, Waterford) Died on March 14, 1923 at Kilkenny Jail. Died from wounds received in Kilkenny Jail after he was shot by a Free State soldier/prison warden.

Michael Brown (Free State, Mountrath, Co. Laois). Died on March 15, 1923 at Windgap. The anti-Treaty IRA ambushed a party of Free State soldiers who were searching houses in the Windgap area. Brown was killed during an initial burst of machine-gun fire.

James O'Keeffe (Free State, Grange, Mooncoin) Died on May 4, 1923 inTipperary. Accidently shot himself on 16 February 1923 when dismounting from a Lancia car. Wounds seemed to be healing but he died at Kilkenny Military Barracks two months later.

James Morrissey (Anti Treaty, Kilkenny city). Died on June 13, 1923. Shot by a Free State soldier/sentry while attempting to escape from Kilkenny Jail. The shooting caused much controversy as Morrissey was well known in the City, while a ceasefire was also in operation

Patrick Hanlon (Anti Treaty, Carrick On Suir, Co. Tipperary) Died at Kilkenny Jail. Aged 16, he was shot by a Free State soldier/ sentry at Kilkenny Jail as he looked out from a window. Died the next day while in transit to a military hospital in Kildare.

For information on Kilkenny fatalities in the War of Independence, click here