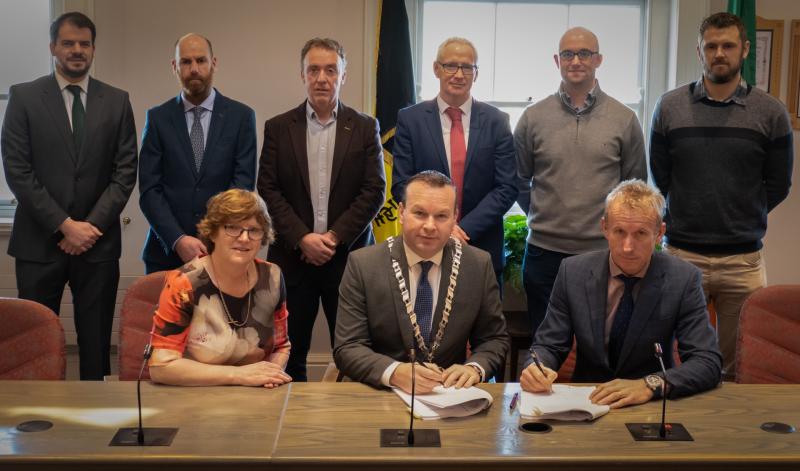 The contract for the construction of the Kilkenny Western Environs Phase 1 Infrastructure Scheme has been signed, having been awarded recently to SIAC Construction Limited.

The proposed road is single carriageway with lighting, footpaths, and cycleways on both sides. Included in the road construction will be all the necessary services required for the future development of the area.

The construction of this road infrastructure will enable an orderly and planned sequence of developments in accordance with the Western Environs Local Area Plan published in May 2004 and subsequently incorporated into the County Development Plans of 2008 and 2014. Proposals for the area include the provision of over 3000 new houses and two new secondary schools. Works are due to commence in March 2019 with expected contract duration of 18 months.

The scheme has been an objective of Kilkenny County Council for many years with planning for this scheme, under Part 8, obtained in 2005. The Compulsory Purchase Order (CPO) for the lands required to deliver the scheme was advertised and submitted to An Bord Pleanála in December 2006 and the CPO was subsequently confirmed in June 2007. Progress on construction was deferred at this time due to the economic downturn.

In October 2016, Kilkenny County Council submitted an application to the Department of Housing, Planning, Community and Local Government, for funding to deliver the scheme under the Local Infrastructure Housing Activation Fund (LIHAF). This application was successful with grant funding of €6.5 million confirmed in December 2018.

Cathaoirleach of Kilkenny County Council Eamon Aylward expressed his delight at the commencement of the scheme. He said  the provision of the infrastructure will enable significant housing construction in the area, leading in turn to the easing of the current housing supply shortage in Kilkenny City, and also the delivery of much needed new schools for the city.