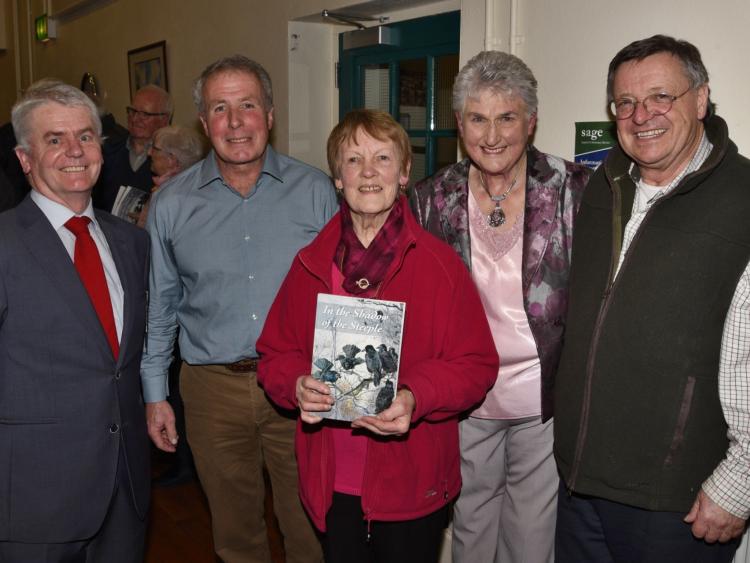 When Dúchas (Tullaherin Heritage Society) decided in 1986 to publish a short history of the area they little realised that thirty-three years later the project would still be going strong. Volume 13 of the journal In the Shadow of the Steeple was launched by Nicholas Mosse on Friday in Bennettsbridge Community Centre before a packed house. Over the years the scope of the journal has widened considerably and now covers much of mid-County Kilkenny. The current edition runs to over 200 pages and contains 19 different articles ranging in length from one to forty-five pages.

The ‘decade of centenaries’ is covered in four separate pieces.  Berni Egan gives an overview of World War One in Thomastown and Tullaherin in which she lists 159 people from the area who took part in the war. The career of one of these, Private Michael Doyle of Kilfane, is covered in some detail in a separate article by his grand-nephew Kevin Kelly. Doyle was killed in the Battle of Loos in north-eastern France on 27 September 1915 and lies buried there. The archive of Thomastown veteran of the War of Independence, Tom Ryan, is examined by William Murphy. Michael O’Dwyer lists the claims for compensation (over 160 in all) which were made from south Kilkenny for damage caused by anti-Treaty forces during the Civil War in 1922 and 1923.

There are a number of essays on different aspects of the ‘Big House’: Eddie Cody on Kilfane House, Michael O’Dwyer on Snowhill House, while Hugh Langrishe (a descendant of the family long associated with Knocktopher) writes of the gentry-dominated corporation of Knocktopher in the eighteenth century.

Sport is represented by Joan Cleere who gives her take on hurling in Bennettsbridge in the 1960s. Michael Holden writes about handball in Kilfane, where a major new development is currently under construction, and Michael O’Dwyer about tennis in Knocktopher, especially the three Langrishe girls, all born in the 1860s, who were Irish and British champions in the early years of lawn tennis as an organised sport.

Genealogist John Kirwan gives the history of the farming Kirwan family of Lower Grange, Goresbridge. Bernie Kirwan and Mary Casteleyn list the gravestone inscriptions from Dungarvan (Kilkenny) Old Cemetery. This is based on their own painstaking survey carried out in the period 2014-18. There are a total of 145 gravestones included, the earliest of which dates from 1581.

Tom Duffy, art historian, has some new research on the celebrated Thomastown-born artist, Mildred Anne Butler, while Will Murphy gives a summary of the career of Henry Flood of Farmley, near Burnchurch, who was one of Ireland’s leading politicians in the eighteenth century.

Bennettsbridge is well served with a history of the Garda Barracks by Phelim Manning. An account by Mary Cassin of shop and business owners in Bennettsbridge is based around a collection of billheads kept by her family over the years. The effects of the ‘Emergency’ in Bennettsbridge are examined by Peggy Walpole and she also details the people from the village who fought in the Second World War.

The cover features a detail of one of Mildred Anne Butler’s finest paintings ‘The High Court of Justice’ which shows a group of crows disputing among themselves. The back cover has a watercolour of Tullaherin round tower and church by Miriam Williams, a member of Dúchas.

The journal is available in most local shops and in bookshops in Kilkenny priced at €12.

Kilkenny coronavirus - second day in a row of no new cases